Sand might seem like an everyday material, but we're running out of it for industrial uses — and that means people are willing to mine it illegally (or worse) to make money. 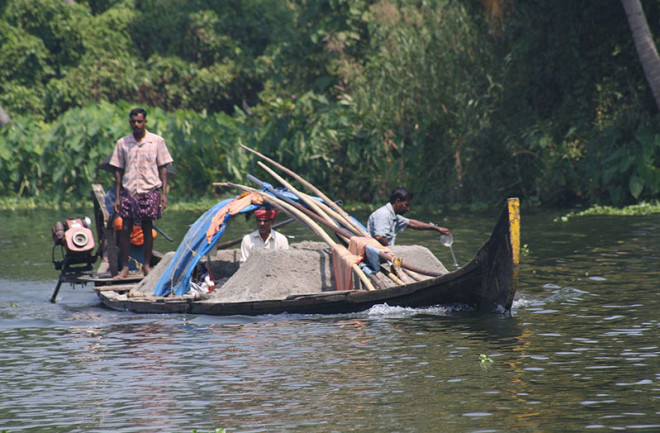 Sand. It's everywhere. Or it feels that way. You see it at the beach, at the playground, along the road, at the river, in the parking lot. It is also hidden in the concrete of your office, in your smartphone screen, in the pavement of your driveway. We use a lot of sand every year — and it has to come from somewhere.

Yet, even though Carl Sagan used to compare the grains of sand on a beach to the stars in the universe, sand is not an infinite resource. Right now, we are extracting sand from rivers, beaches, deserts and oceans — twice the amount of sand than is naturally replenished by geologic processes. That is almost 40 billion tons per year and some estimates think we could double that by 2060. Sand itself accounts for almost 85 percent of all mining on Earth today.

Where is all this sand going? Much of it ends up in construction supplies, such as concrete, glass, and roadways. Sand is also a great way to reclaim land on the shores to keep building. There's high demand for sand for industrial uses, particularly abrasives like ubiquitous sand paper. Sand is also used in fracking, as the grains are used to hold open the newly-created cracks in rock. Sand is also used to make the multitude of screens we use every day, from smartphones, to TVs, and other displays.

With all the construction uses, you can imagine that countries doing a lot of building are big sand consumers. China uses almost 60 percent of the world's sand. Dubai and Singapore combined use almost 1.5 billion tons of sand to create new islands. The Burj Khalifa in Dubai alone used 330,000 cubic meters of concrete — that would require over 5 million tons of sand alone to make.

Islands created in the Persian Gulf off of Dubai. Islands like these, and the rapid rates of construction, have resulted in the area importing a large volume of sand. (Image: NASA)

All this sand mining is taking its toll on the regions where the best river sands are found. River sands have the right combination of shape and purity for a multitude of uses. Some of the rivers in India are being mined so aggressively that they are losing sand at a rate 40 times larger than the natural replenishment. This has led to river beds dropping 6 feet over the past few decades.

This, of course, has massive environmental implications. The extraction of sand in these rivers decimates the ecologies of the rivers, both in the water and on the banks. Habitats, river courses, water tables — they have all been altered by the rapid removal of sand.

Even beyond the environmental damage, the people who mine these sands are being put into peril as well. Because of the rapid degradation of the landscape, India has banned sand mining in many rivers. This has led to illegal sand mining — and even murders — to keep the sand flowing. There are no global treaties that tackle sand mining, so only local regulations, which are often toothless, can control the practice.

So, how can we solve this issue of over-extraction of sand across the globe? At the 2020 Geological Society of America Annual Meeting, Zac Sickmann and Aurora Torres of the University of Texas, Austin, have suggested we need to start fingerprinting sand sources. Sand particles or populations can have distinctive compositions linked to their sources. If we can build a database of sand sources, Sickmann suggests that we could look at concrete in buildings or supplies at your local home improvement store and know where the sand had originated.

This would be much like what was done to identify "blood diamonds" that were mined to fund conflict in countries like Angola. The chemical composition of the sand would be able to say whether the sand was mined from an illegal operation. In that way, these operations could be weeded out from the sand mining market.

What can we do to make up the sand difference if we shouldn't be over-mining some areas? Some suggestions include dredging behind dams and in reservoirs where sediment that would normally flow down a river gets trapped anyway. There are also ways to substitute other materials for natural sands in industrial uses — the problem lies in the current cheap price for sand ($5-20 per ton, even for the consumer). One potential replacement could be glass sand, made from grinding recycled glass material. However, as with many similar issues, just simply using fewer new construction materials could help as well.

Sand might not be as glamorous as gems and metals. Yet, it might be the most important resource extracted from the Earth today — and, like many resources, it is not easily replaced if used up. And much like many other resources, its extraction can be highly damaging. Being able to track the source of sand to monitor how it is extracted might move us closer to making sand a more sustainable resource.