Top tip: do not steal food from ant traps 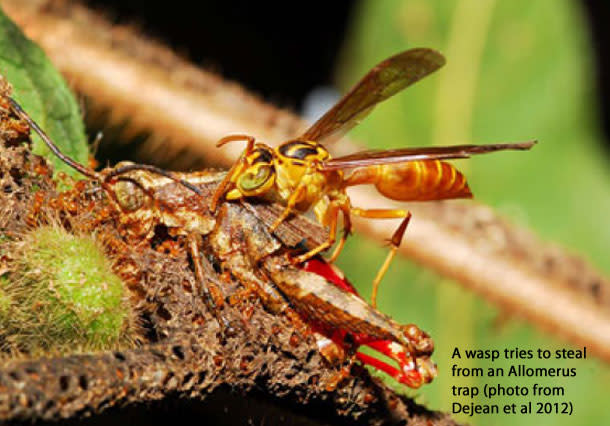 The Amazonian tree known Hirtella physophora looks rather unassuming, but it is the site of several grisly spectacles. Amid its leaves and branches, an animal, a plant and a fungus conspire to create a nightmarish trap where trespassers become meals, robbers get the death penalty, and assassins are assassinated. The tree is home to ants called Allomerus decemarticulatus, which defend it from hungry insects. In return, the tree provides the ants with leaf pouches and swollen thorns as shelter, and feeds them with nectar and sugary nodules. These food sources are rich in carbohydrates but low in proteins. To supplement their diets, the ants need flesh, and they get it by shaping the tree into traps. The ants cut hairs from the plant and weave them together into a hollow gallery, which extends down the side of the tree’s branches. Within the gallery, the ants hide inside small holes, jaws agape. From the outside, nothing can see them. If an insect lands on the trap, hundreds of lurking jaws seize its legs and pull it spread-eagled, as if on a medieval ‘torture rack’. The victim is overpowered and dismembered. [embed width="610”] http://www.youtube.com/watch?v=zrL5BYRqrTI[/embed] This alliance between ant and plant involves a third partner. Within their shelters, the ants grow a single species of fungus from the Chaetothyriales group. Many ants, including the famous leaf-cutters, grow fungi for food but the Allomerus ants use their fungi for construction instead. It acts as the glue that binds the plant hairs in their traps. The plant provides the bricks and the foundations, the fungus provides the mortar, and the ants do the manual labour. There’s some dispute about what the galleries are actually for. Ant specialist Mark Moffett thinks that they’re defensive structures rather than actual traps. But Alain Dejean from CNRS Guyane, who first discovered the ants’ traps in 2005, is sticking to his interpretation. More recently, he wondered if the structures are ever robbed. Once an animal is caught, the ants can take more than 9 hours to tear it apart. That gives plenty of time for thieves to steal the ants’ prize, and there are many such thieves around.

When Dejean furnished the ants with a chunky cricket, he saw that large wasps and stingless bees tried to cut pieces off the insect while the ants held it down. (Social wasps (like the black-and-yellow ones you’re familiar with) often nest under the shelter of ant-guarded trees because the local ants deter marauding army ants.) Assassin bugs stabbed the cricket with their mouthparts and sucked its juices. Flies licked the fluids that leaked from the injuries. But these robbers sometimes became meals themselves. While feeding on the immobilised cricket, they would occasionally put a leg on the gallery itself, and the ants would try to grab them. The bees and flies were usually agile enough to fly away. The assassin bugs, which have their face deeply embedded in the cricket, were always caught. The wasps were occasionally captured, depending on how big or heavy they were. (They also fared worse if the cricket was bigger; more of them would try to take a piece and bump each other around.) You could look at this in two ways. On one hand, the ants are susceptible to theft by other insects that can exploit their effective traps. Alternatively, the traps are doubly effective because they allow the ants to eat not only the insects that blunder into the trap, but those that try to feed from them. It’s a trap for thieves as well as passers-by. This second interpretation seems to be the right one. Dejean calculated that flesh of the thieves that are captured compensates for the bits of cricket that are carried off. In the end, the ants’ balance sheet comes out positive. Reference: Dejean, Carpenter, Corbara, Wright, Roux & LaPierre. 2012. The hunter becomes the hunted: when cleptobiotic insects are captured by their target ants. Naturwissenschaften http://dx.doi.org/10.1007/s00114-012-0895-3Images from Dejean et al 2005, and 2012 More on ants