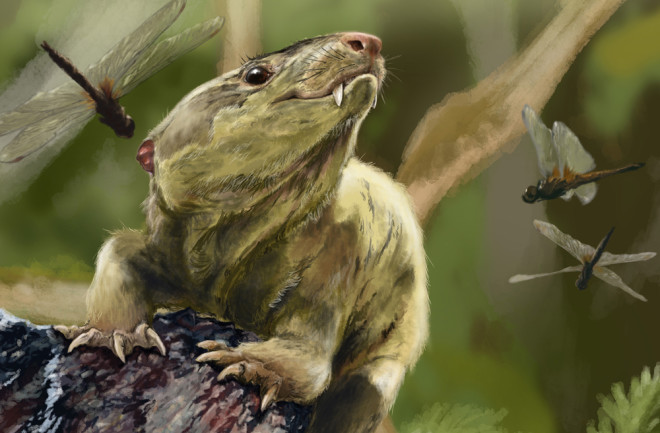 (Credit: Jorge Blanco) They're toothy, furry and tiny, but their existence kicked off an evolutionary success story 240 million years in the making. Cynodonts are some of the earliest ancestors of mammals, often referred to as ‘mammal-like reptiles.’ They first arose around 260 million years ago, just before the greatest extinction of all time which claimed 95 percent of all life on Earth. In particular, probainoganthian cynodonts are crucial in guiding our understanding of evolutionary history prior to the emergence of Mammaliaformes — the group that includes all mammals, and their ancestors. All modern mammals, even ourselves, evolved from these early, rodent-like critters. Even the jaws and skulls of cynodonts were very ‘mammal-like’, with a robust form and canines very similar to many modern species. Research by Agustín Martinelli and colleagues from Brazil has now revealed two new species of probainognathian cynodont from the Late Triassic, around 230 million years ago, of the Rio Grande do Sul state in southern Brazil. This forms part of an ongoing project into the evolutionary relationships between cynodonts and the earliest mammals in South America.

The first of these, Bonacynodon schultzi, is known from two beautifully preserved skulls. These specimens were discovered back in the 1940s, and have been gathering dust in the Museu de Ciências da Terra in Rio de Janeiro, Brazil for seven decades. The closest relative of Bonacyndon was Probainognathus, based on their canine teeth with a serrated margin, a feature shared between the two species. Probainognathus is one of the most important cynodont species, as despite being just 10 centimeters long, it shows the early development of the mammalian joint between the upper and lower jaws. The canine teeth in the upper jaw of Bonacynodon were noticeably large and protruding, adding to the great tooth variety of cynodonts from South America during the Triassic period. This is important, as it shows that cynodonts early on were capable of adapting to a variety of ecologies, which might have played a role in their evolutionary success. Its teeth also indicate the animal was likely feeding on small prey, or had an omnivorous diet, very similar to many small mammals today. “Early mammal evolution is often told through the changes in their teeth as they evolve to process different foods, so knowing the dentition of these probainognathans doesn’t just tell us what these particular animals ate, but how the whole group changed as they became more mammal-like,” says Elsa Panciroli, a PhD student at the University of Edinburgh and National Museums Scotland, who studies the origins and early evolution of mammals. The research was published in the open access journal PLOS ONE.

The second new species, Santacruzgnathus abdalai, is known only from a fossilized lower jaw. Its identification as a unique animal was based on re-examination of fossils previously referred to another cynodont species. Martinelli and colleagues found it to be closely related to Prozostrodon, also from Brazil, increasing the biodiversity of cynodont species in the Triassic of South America. “These two new species give us a glimpse at some of our oldest furry cousins. Our ancestors would have started out as meek little creatures that lived underfoot of the dinosaurs, but from these humble little fur balls great things would eventually come,” says Steve Brusatte, also a paleontologist at the University of Edinburgh.

By understanding the biodiversity and evolutionary relationships of cynodonts including the new species, researchers hope to understand why some species survived another mass extinction at the end of the Triassic, whereas others did not. For example, in some cynodont species the number of jaw bones was much fewer than other groups of animal around at the time, with some bones reducing in size and moving towards the skull, where they would eventually become part of the mammal ear system. “We’re starting to realize that many of the characteristics we associate with being mammals, like having fur and producing milk, have their origins in these not-quite-mammal ancestors. This makes every new discovery about them important. It doesn’t just tell us about some ancient dead creatures – it’s the story of our own earliest origins,” says Panciroli. Martinelli and colleagues are still working on South American cynodonts, and hope that their work will reveal much about our understanding of these strange, ferret-like animals that started a 240-million-year evolutionary success story.