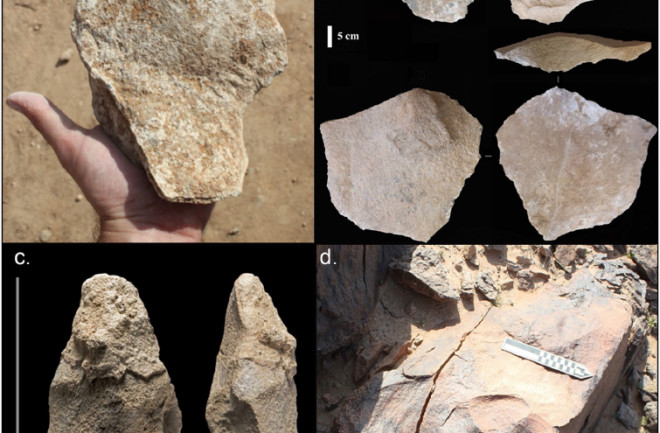 Stone tools found at Saffaqah, in central Saudi Arabia, include (a) a large flake with a smaller flake created during tool manufacture still attached, (b) other large flakes, (c) a handaxe and (d) a large core. (Credit: Scerri et al 2018, doi:10.1038/s41598-018-35242-5) Hundreds of stone tools and related materials, found in central Saudi Arabia, reveal new information about early migrations of archaic humans into Southwest Asia. The discovery suggests multiple waves of tool-makers may have passed through the region, at least some by following waterways now lost to the desert. Saffaqah, an archaeological site in the heart of the Arabian Desert, is not new to science. It was first studied in the 1980s, when researchers found more than 8,000 artifacts. Unfortunately, these early excavations lacked sufficient data collection to establish confident dates for the finds. A new excavation effort at Saffaqah, however, has identified and dated more than 500 additional artifacts deposited at the site between about 190,000 and 240,000 years ago. The style of the tools, and their similarities to other artifacts found elsewhere, give us new insight into how our distant ancestors and evolutionary cousins dispersed from our African homeland. The Saffaqah artifacts include finished stone tools as well as raw material, such as large blocks of andesite, a type of volcanic rock well-suited for chipping into handaxes and other implements. The tools found are of the Acheulean style, one of the most significant in the story of human evolution. Acheulean technology is found throughout most of the Old World, with the earliest examples made about 1.76 million years ago at a handful of East African sites. Paleoanthropologists believe Homo erectus developed the style, which is significantly more complex than previous technologies. For that reason, the presence of Acheulean tools is often considered a proxy for advanced cognition in the tool-maker. About 150,000-200,000 years ago, depending on the region, Acheulean technology was replaced by other, even more complex styles. The Acheulean is, however, the genus Homo's longest lasting technology. Yet despite its success as a tool-making tradition, much of the Acheulean story, including how and when it spread, has remained unknown. Using Tools To Identify Migrations Finding confidently dated Acheulean artifacts in the Arabian Desert is particularly difficult. The region's current desert conditions pose several logistical challenges for field researchers, including something called deflation. Unlike, say, a river cutting through stratified rock to reveal artifacts that were previously deposited in specific layers, in a desert, winds erode loose surface particles, blowing them every which way. Artifacts typically surface without any clear geological context that could be used for dating. Saffaqah, however, is the only known stratified archaeological site in the Arabian Peninsula, and was once was situated between two major river systems. These rivers are now extinct, but previous paleoenvironmental research has established that, during several periods in the last million or so years, Arabia was a verdant land of rivers, lakes and wetlands.

A map of river systems, based on paleohydrological studies, during the period Saffaqah (inset photo) and other archaeological sites were inhabited by archaic members of the genus Homo. (Credit: Scerri et al 2018 doi:10.1038/s41598-018-35242-5) The dates of the Saffaqah artifacts match one of those wetter periods. According to the team behind the new study, the site's location suggests that archaic humans were following the peninsula's networks of rivers and other waterways across its interior. The similarities between the Saffaqah artifacts and undated stone tools found at other Arabian sites, notably Jubbah and Wadi Fatima, suggest that a human presence in the region was widespread. The Saffaqah artifacts are also stylistically similar to Late Acheulean tools found in Eastern Africa. Undated Acheulean artifacts from the north of the Arabian Peninsula, however, are stylistically closer to those found in the Levant, where the oldest Acheulean finds go back 1.5 million years. The differences in style, say the researchers, suggests multiple waves of dispersal from Africa, following different routes into Asia. These multiple dispersals were not merely different groups of the same population, but geographically and culturally diverse archaic humans likely representing multiple species. Saffaqah is the youngest Acheulean site in southwest Asia, for example, and it's just a little older than a recent find in Misliya, Israel. As reported earlier this year, the anatomically modern humans in Misliya were already using the more advanced Levallois tool technology. The open access research appears today in Scientific Reports.