Tool And Butchery Site in Algeria Is 2.4 Million Years Old 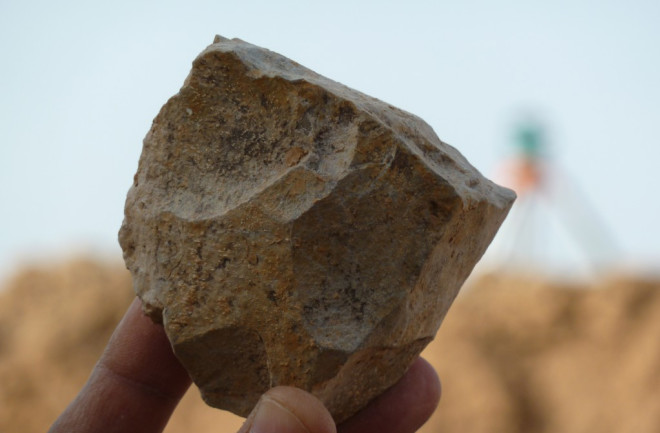 Ain Boucherit, a site in Algeria, has yielded numerous stone tools, such as this Oldowan core. The tools are up to 2.4 million years old and were found with hundreds of animal bones, several of which show signs of butchery. (Credit: M. Sahnouni)

Stone tools and animal bones with cut marks, excavated at a site in eastern Algeria, are up to 2.4 million years old, the oldest archaeological evidence in North Africa and one of the oldest known examples of butchery. The finds suggest hominins, members of the human family tree, were living in the region almost half a million years earlier than previously thought.

Paleoanthropologists had long believed that tool use among hominins began in East Africa. The oldest stone tools, 3.3 million years old, have been found there, as well as numerous other examples that show how their manufacture evolved over millions of years. For example, the oldest widespread tool technology, the Oldowan, appears to have emerged in the region at least 2.6 million years ago.

Researchers once thought, based on initial finds, that the Oldowan style originated with Homo habilis, the earliest known member of our genus. It now appears, however, that the tool technology may predate that species and could be an innovation of a late australopith, ancestors of Homo. The Oldowan style eventually spread as far as China, though at many sites it is unclear which hominin species made the tools.

In 2013, researchers announced the discovery of North Africa’s earliest examples of Oldowan tools, and their use in butchering animals, at Ain Hanech, a site in northeastern Algeria. The finds were 1.8 million years old.

Today, however, several of the same researchers describe significantly older Oldowan tools, and animal bones bearing distinctive stone tool cut and smash marks. The artifacts come from the site of Ain Boucherit, close to Ain Hanech and part of the same sedimentary basin created by a braided river system (a network of shifting channels across a floodplain).

The new finds, from two separate deposits, are 1.9 million and 2.4 million years old. In the older deposit, the team found 17 artifacts, including cores and flakes, thin pieces of stone broken off to create sharp edges on the core tools.

Artifacts were significantly more plentiful in the deposit dated to 1.9 million years ago: Researchers recovered more than a hundred cores, dozens of flakes and numerous fragments. Tools from both deposits were mostly limestone with a few made from flint; both materials, say the authors, were likely collected from nearby channel beds.

A map released by the authors shows Ain Boucherit in Algeria along with a selection of other significant Oldowan sites in Africa. (Credit: M. Sahnouni)

A map released by the authors shows Ain Boucherit in Algeria along with a selection of other significant Oldowan sites in Africa. (Credit: M. Sahnouni)

The new finds are significant for a few reasons. First, they push back the arrival of hominins to North Africa and the Mediterranean by hundreds of thousands of years. The Oldowan tools also suggest that, if the style did originate in East Africa, it spread more quickly than once thought.

Alternatively, say the authors, the age and location of the tools could be interpreted as evidence supporting a multiple origins theory: Some paleoanthropologists believe the tool-making method arose independently in numerous locations across Africa.

The Meat Of The Matter

An animal bone excavated from Ain Boucherit in Algeria (top image) has cut marks made by a stone tool (close-up image of area outlined in black), providing evidence of an early hominin presence in the region. (Credit: I. Caceres)

An animal bone excavated from Ain Boucherit in Algeria (top image) has cut marks made by a stone tool (close-up image of area outlined in black), providing evidence of an early hominin presence in the region. (Credit: I. Caceres)

The ages of the deposits were determined using both electron spin resonance, which measures how many electrons have accumulated in certain materials since burial, and magnetostratigraphy, which dates layers of rock to known periods of flip-flop in Earth’s polarity. The dates obtained also agree with timeframes for animals identified from the bones unearthed during the excavations.

Nearly 300 bones were found in each of the two deposits, most of them belonging to distant relatives of modern horses and gazelles. Partial remains of at least one elephant-like Anancus turned up as well, though the majority of bones present in both deposits belonged to small and medium-sized animals.

In both deposits, limb bones from animals were the most common remains found. Several of the bones feature marks from cutting or smashing using stone tools, which is consistent with skinning, defleshing and marrow retrieval, all associated with butchering a carcass. The finds make Ain Boucherit one of only three known sites, all of them in Africa, where butchered bones and stone tools have been found together this far back in time.

The research appears today in Science.

Exacavations at Ain Boucherit in Algeria have yielded evidence of stone tools and meat processing up to 2.4 million years ago. (Credit: M. Sahnouni)

Exacavations at Ain Boucherit in Algeria have yielded evidence of stone tools and meat processing up to 2.4 million years ago. (Credit: M. Sahnouni)