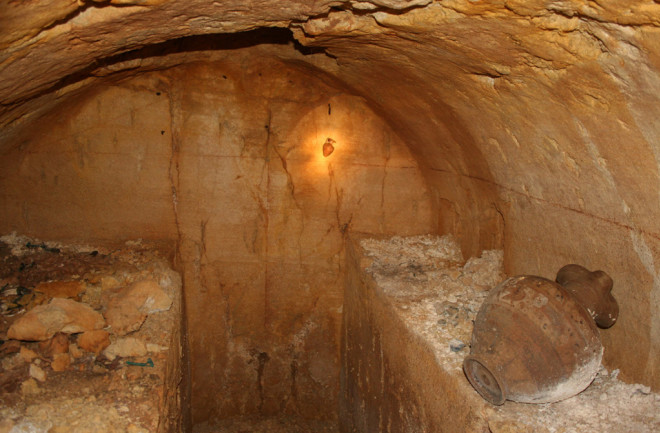 A look inside the Etruscan tomb at the two platforms and the remaining vases. As archaeologists in Italy chipped through a stone seal and rolled away a stone last week, light shone into an ancient Etruscan tomb for the first time in 26 centuries, illuminating a mysterious civilization of old. Etruscan society ruled the peninsula we now call Italy for hundreds of years before being taken over by the Romans. Discovery News reported:

Since their puzzling, non-Indo-European language was virtually extinguished (they left no literature to document their society), the Etruscans have long been considered one of antiquity's great enigmas... Only the richly decorated tombs they left behind have provided clues to fully reconstruct their history.

Pots found in the tomb of the Etruscan warrior prince. This tomb was no exception. In fact, this find was especially rare since it housed royalty. Jars and vases found outside the tomb evidenced that a burial ceremony had taken place, indicating that the individuals inside were of high status. Researcher Alessandro Mandolesi of the University of Turin told Discovery News,

“It’s a unique discovery, as it is extremely rare to find an inviolate Etruscan tomb of an upper-class individual. It opens up huge study opportunities on the Etruscans.”

Mandolesi and colleagues uncovered the tomb in the modern city of Tarquinia, a UNESCO World Heritage site called Etruria by ancient peoples. Inside the tomb were two platforms, one bearing the complete skeleton of a warrior prince wrapped in a decayed, decorated cloak, and the other thought to hold the incinerated remains of his wife. Scads of other treasures also filled the cave-like tomb, including a jewelry box, an iron spear, and dishes of still-preserved food.

Dishes of food in the tomb still contain preserved remains of a meal. On the back wall of the tomb was a small vase that probably held an ointment. It has hung undisturbed on its tiny nail for the last 2,600 years, bearing Etruscan secrets that archaeologists will now begin to explore.