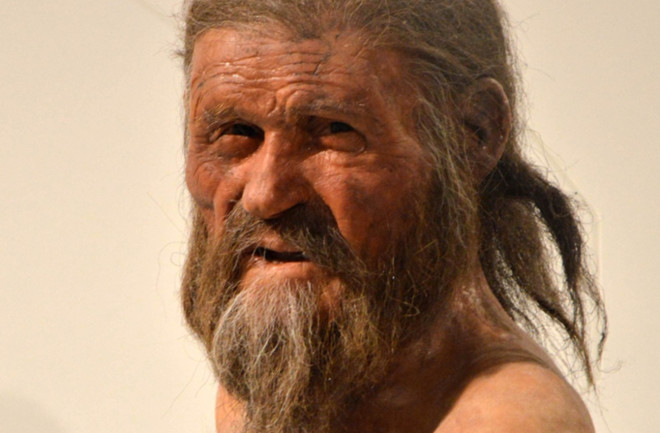 A reproduction of Otzi at the Tyrol Museum of Archaeology in Bolzano, South Tyrol, Italy. (Credit: Zigres/Shutterstock)

More than three thousand years ago, high in the Tyrolean Alps, two shepherds trudged on through deepening snow. For two days, the pair had been trying to shake off a band of marauders to no avail. When they climbed high into the alpine to take refuge in the sheer cliff bands, the thieves chased them deep into a deep gully above a steep face. The shepherds continued downwards — the risk of a fall was better than the certain fate that awaited them if they stayed put.

Now, the shepherds were hungry, tired and fairly certain that their attackers were off the scent. They had run, adrenaline fueled, down the morainal slopes to lower ground, just in time for an early-season snowstorm to cut off visibility at 50 paces. Seated around a small fire, they retrieved a supper of einkorn wheat, bracken fiddleheads and smoked red deer and ibex meat from birchbark baskets. It was the last meal they would ever eat.

These scenes are one of any number of scenarios that could have played out over the last few days of life of Europe’s oldest known mummy, Otzi the iceman. Ever since a pair of German tourists found his body melting out of a glacier in 1991, researchers have doggedly searched for clues as to the manner of Otzi’s death. But, an unequivocal account would require a time machine.

“Was he really the good guy? Was he the bad guy?” Frank Maixner, a researcher at Eurac Research’s center for mummy studies in Italy, asked rhetorically. “We’ll never really know.”

Perhaps the best window we have into ancient mummies' lives and deaths is through their stomachs. A glimpse of Otzi’s last meal can tell scientists multitudes about the climate he lived in, the food that was available to him and how he prepared it.

Until recently, techniques for analyzing the preserved contents of ancient humans’ digestive systems relied mostly on careful study under a microscope. Now, researchers are able to identify it in much greater detail by identifying indicators like proteins, metabolites and unique genetic sequences. Two studies in particular have taken advantage of these evolving techniques, Maixner’s 2018 paper on Otzi was the first. In July, a team of Danish scientists from the Silkeborg Museum applied the same tactics to the last meal of Tollund Man, a 2,300-year-old murder victim that was found enshrouded in sphagnum moss in a Danish bog.

Like Otzi, Tollund man ate a mix of cereal grains before he died, the bulk of which were identified as barley and flax. Surprisingly, they were accompanied by “threshing waste”: seeds of wild weeds and a surprising quantity of sand. Since these components could be easily removed during traditional processing of grains, researchers speculate that their presence was intentional.

The remains of Tollund Man shortly after his discovery in 1950. (Credit: Nationalmuseet/CC by SA 3.0/Wikimedia Commons)

“Why have they included pale persicaria in the food?” Nina Nielsen, Silkeborg’s head of research asked. “Well, it was in the fields so it wouldn’t demand a lot of work to include it. But, was it a normal food source or was it saved for special occasions, like human sacrifices?”

Though Nielsen’s team was able to identify the grains and weeds in Tollund man’s stomach with great specificity, the results were mostly consistent with 1950’s studies that had previously inspected the stomach contents under a microscope. The most surprising outcome of the new research came in just before the paper went to print in Antiquity. A final protein analysis on a brand new mass spectrometer revealed that Tollund man was omnivorous.

“It was really surprising. We found evidence of fish. We haven’t seen that at all in the previous research,” Nielsen said.

Similarly, Maixner’s team solidified the theory of Otzi’s omnivorousness by analysing traces of DNA, protein and metabolites from his last meal. Their multi-pronged approach allowed the scientists to identify the meat as wild game, red deer and ibex, with a high degree of certainty.

“We noticed, from other records, that they struggled to sustain livestock around this time,” Maixner said. “They had been living as farmers, but they had to go back to a more traditional hunter gatherer lifestyle.”

Reading through Nielsen and Maixner’s research, it’s hard to imagine that there is much more to know about Otzi or Tollund Man’s final feasts. The major components of each meal have been identified down to a species level. But, Maixner says there is more to uncover.

“There are still microscopic plant remains that we could not assign,” he said. “One big issue is the comparative data sets.”

Because scientists have yet to sequence the genomes of many plant species, much of the genetic material that Maixner’s team analysed was impossible to pin down. As genomic databases continue to grow, so will the insight that researchers have into ancient remains.