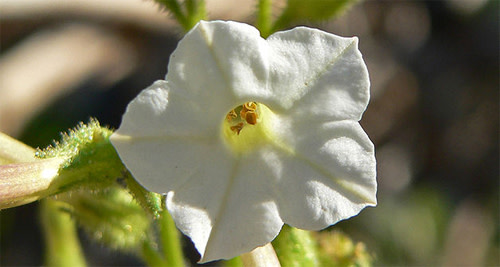 The partnerships between flowering plants and the animals that pollinate them are some of the most familiar in the natural world. The active nature of animals typically casts the plants as the passive partners in this alliance, but in reality, they're just as involved. That becomes particularly apparent when the animals renege on their partnership.

Nicotinia attenuata, a type of wild US tobacco, is usually pollinated by hawkmoths. To lure them in, it opens its flowers at night and releases alluring chemicals. But pollinating hawkmoths often lay their eggs on the plants they visit and the voracious caterpillars start eating the plants. Fortunately for the plant, it has a back-up plan. It stops producing its moth-attracting chemicals and starts opening its flowers during the day instead. This simple change of timing opens its nectar stores to a very different pollinator that has no interest in eating it - the black-chinned hummingbird.

Danny Kessler from the Max Planck Institute first noticed the tobacco plant's partner-swapping antics by watching a population of flowers that was overrun by hawkmoth caterpillars. Nearly every plant was infested. To Kessler's surprise, around one in six flowers started opening between 6 and 10am, rather than their normal business hours of 6 and 10pm. To see if the two trends were related, Kessley deliberately infested plants from another population with young hawkmoth larvae.

Eight days later, and 35% of the flowers had started opening in the morning, compared to just 11% of uninfested plants. The flowers use a cocktail of various chemicals to lures in night-flying moths, but the main ingredient is benzyl acetone (BA). A large plume gets releases when the flower opens at night. It's so essential that genetically modified plants, which can't produce BA, never manage to attract any moths. Nonetheless, the flowers that opened in the morning never produced any BA.

By artificially boosting the nectar yield of specific flowers, Kessler showed that hawkmoths are more likely to lay eggs on plants that reward them with the most nectar. So by putting off the adult hawkmoths from visiting the flowers, the plants gained a reprieve from future onslaughts by their larvae.

The larvae themselves prompt the switch. As they munch away, their saliva releases complex mixtures of fats and amino acids into the wounds they create. This cocktail trigger a genetic alarm in the plant's cells, which culminates in a burst of jasmonic acid. This all-important plant chemical coordinates a variety of defences, from producing poisons to summoning predators and parasitic wasps. In this case, it's responsible for shifting the flowers' blooming schedule.

Kessler demonstrated the role of the caterpillars' saliva and jasmonic acid through a clever series of experiments. Even if no larvae are around, just adding their saliva to artificial wounds causes some plants to switch to the morning opening hours. If the plants are genetically modified so that they can't produce jasmonic acid, the entire process grinds to a halt, rescued only by the artificial addition of jasmonic acid.

Having solved the problem of the very hungry caterpillars, the plants still need pollinators. Again, the revised opening schedule provides the solution. Through painstaking field observations, Kessler showed that hummingbirds were strongly attracted to the morning blossoms, almost always visiting these flowers first. The birds have apparently learned to associate the shape of the opened flowers with the prospect of a rich, early-morning beakful of nectar. The plant gets a new partner, while avoiding the unwanted shenanigans of its old one.

Hummingbirds, of course, never eat other parts of the plant but if they're such compliant partners, why doesn't the tobacco plant always open its flowers in the morning? We don't know, but Kessler suggests that the birds, for all their strengths, may not be quite as reliable as the moths. Hummingbirds are more likely to drink from multiple flowers on the same plant, which would lead to a lot of self-fertilisation. They're more restricted by geographical factors, such as the presence of nearby nest sites. And, unlike hawkmoths, they can't be summoned across long distances through the simple use of smell.