To Understand Fossils, These Paleontologists Are Making Faux-ssils 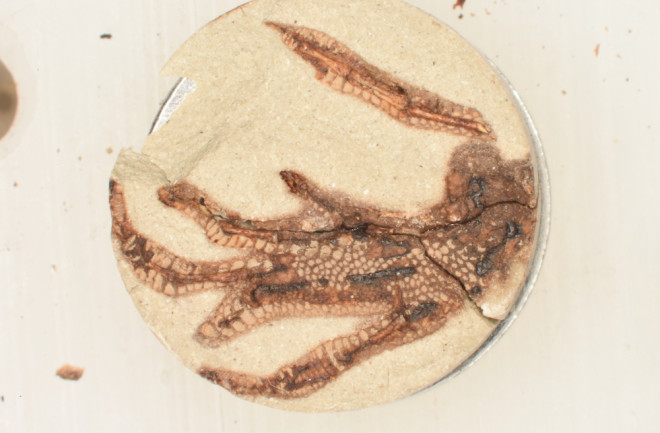 A lizard foot after it endured compaction in clay and extreme pressure-cooking, to mimic fossilization. (Credit: Evan Saitta, Tom Kaye)To learn more from fossils they find in nature, paleontologists are trying to create their own. For decades, paleontologists have been experimenting with heat, pressure, and other factors to mimic nature’s ability to preserve the bodies of living things as fossils. Trying to copy fossilization in a laboratory would allow paleontologists to better understand the process and learn more about the history of life on our planet from the fossils they find. In a study published in the journal Palaeontologyon Wednesday, one team presented a method for simulating the fossilization process that has made some of the most realistic-looking artificial fossils yet. The researchers packed feathers and lizard parts into clay tablets before subjecting them to the traditional high-temperature, high-pressure method for simulating the fossilization process.

A Pressure Cooker on Steroids

The project began when paleontologist Evan Saitta decided that he wanted to try the traditional heat- and pressure-based fossilization experiments but embed would-be fossils in some kind of sediment, like the sand and clay found in rivers where dead animals can get buried and fossilized. Sediment is porous and acts as a filter that lets some molecules escape from a carcass while others stay behind. Using sediment in an experimental fossilization setup, Saitta thought, might mimic this natural process and make more realistic artificial fossils. In past fossilization experiments, specimens were often either placed in sealed containers or wrapped in foil, Saitta says.Saitta teamed up with Tom Kaye, an independent researcher, to try this out. In his lab, Kaye has a lab oven he calls a “pressure cooker on steroids,” which can reach the high temperatures and pressures needed for these fossilization experiments. The two experimented by packing feathers or the feet and heads of lizards into sand or clay tablets less than an inch wide before pressure-cooking them in the lab oven for up to 24 hours at temperatures as high as 480 degrees Fahrenheit and pressures as high as 300 times atmospheric pressure at sea level. They didn’t have much luck with sand, but the clay tablets were a different story.

The black and white feather after going through the simulated fossilization process. Some of the darker color sticks around in the form of melanosomes, cellular organs that carry the pigment melanin. (Credit: Evan Saitta, Tom Kaye)

Your Fossil is Served

“We were stunned, stunned at how well they came out,” Kaye says. One of the first trials they did was of a lizard foot in a clay tablet. “We cracked it open and we go, ‘Look at that, there’s skin impressions, the bones are brown!’ We couldn’t have asked for a better result.” The artificial fossils looked pretty good by eye, but Saitta wanted to see how they held up under a scanning electron microscope. He found that the artificial fossils had melanosomes, tiny cellular organs that contain the pigment melanin. Melanosomes are often preserved in fossils, and paleontologists have recently been able to study fossils’ melanosomes and reconstruct the colors of ancient creatures, like dinosaurs. Because the artificial fossils still had melanosomes but lost the surrounding fatty tissues, like real fossils do, the experiment seemed to be a success at the microscopic level too. One of the next steps, Saitta says, would be to look for similarities between their artificial fossils and real fossils beyond the microscopic level, by doing chemical analyses. “We have high hopes that our method will probably lead to improved chemical similarities than previous methods, but we need to actually test if that’s the case or not,” says Saitta.

Paleobiologist Maria McNamara, who was not involved in the study, says using sediments like clay for fossilization experiments is possible with existing methods, but this method seems to allow for larger specimens and tissue samples, which is useful. Though this study’s artificial fossils are under an inch in diameter, they’re large enough to show details in skins and feathers. McNamara hopes that using sediments in fossilization experiments and making artificial fossils that look more similar to real ones will reassure some paleontologists who are wary of fossilization experiments. “There are some palaeontologists who say that controlled experimentation is not an appropriate analog, because it doesn’t replicate the natural environment,” McNamara says. But McNamara says that’s why controlled experiments are so crucial. “We cannot replicate the natural environment. We can never know all of the variables that were at stake. So the only way we can investigate fossilization is by using controlled experiments,” McNamara says. “I think this study is a nice attempt to bridge that gap.”