To Study OCD, Scientists Get Their (Rubber) Hands Dirty 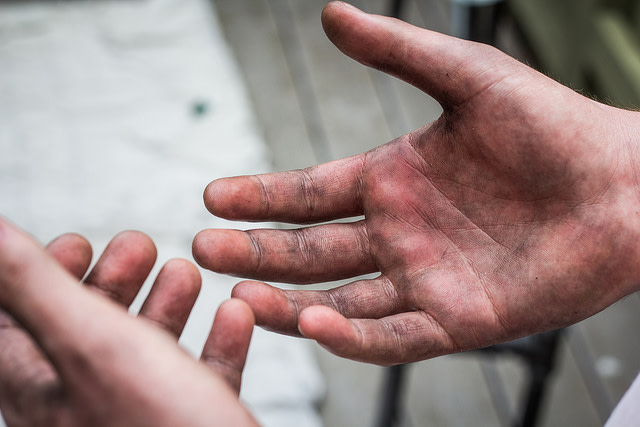 The rubber hand illusion is a classic experiment that reveals how our brains build a sense of our bodies. For the latest twist on the illusion, researchers simulated OCD-like feelings of disgust in subjects by starting with rubber hands and adding fake blood, vomit and feces. The basic rubber hand experiment is simple to set up. It requires a fake hand, two paintbrushes, a table, and something to use as a little wall. A subject sits with both hands flat on the table, one of them farther out to the side. The barrier blocks her view of that hand. The rubber hand lies just inside the wall, so that when the subject looks down she sees two hands in front of her—but only one is her own. Across the table, an experimenter uses the two brushes to stroke the backs of the hidden hand and the rubber hand at the same time. Gradually, as the subject feels the paintbrush on her skin and watches the brush stroking the rubber hand, she experiences a powerful illusion that the fake hand is part of her body. 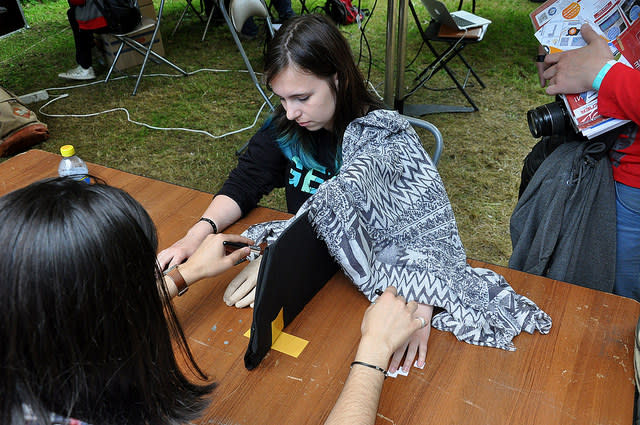 The basic setup of the rubber hand illusion. (The cloth is creating a sleeve for the fake hand.) It turns out that our brains are happy to adopt inanimate objects as our own body parts, and that we use visual cues to figure out where the boundaries of our bodies are. These insights have been important to researchers studying prosthetics, for example, or phantom limbs. At the Center for Brain and Cognition at the University of California, San Diego, Baland Jalal set out to see whether he could use the rubber hand illusion to study obsessive-compulsive disorder. In one form of OCD, people have an extreme fear of germs and contamination. People without OCD experience the same feelings to a lesser degree—for example, disgust after stepping in dog poop. If people feel that a rubber hand is part of their own body, Jalal wanted to know, will they also experience this kind of disgust when the rubber hand touches something gross? The subjects were 14 college students. Jalal and his coauthors wanted to make sure everyone experienced something they personally found gross, so they prepared three props: fake blood, fake vomit, and fake feces. They made the materials out of food items, he explains. To create fake feces, for example, "We used things like Nutella, peanut butter, chocolate, cornstarch, barbecue sauce, and an artificial odor that mimicked that of feces." Jalal adds that it "looked quite real." The researchers showed their subjects each of the three gross items "from a safe distance," he says, without revealing that the materials were fake. Subjects rated how disgusted each substance made them feel. Whichever thing they found the grossest—blood, vomit, or Nutella-and-barbecue-sauce feces—would move to the next stage of the experiment with them. Subjects then sat with the rubber hand while a researcher brushed them with the paintbrushes. In different sessions, the paintbrushes either moved in sync or out of sync. The timing creates the illusion—when the brushes are synced up, what a subject sees matches what she feels. Brushing out of sync is a control condition that shouldn't trigger the illusion. It doesn't work on everybody, though. In this experiment, three people didn't experience the illusion when the brushes were synced, so their results were removed. After five minutes of brushing, a researcher placed a tissue or bandage on the rubber hand—in the subject's sight—with the fake blood, vomit or feces on it. A clean tissue was simultaneously placed on the subject's real hand, out of sight. After 15 seconds, subjects rated how grossed-out they felt. Out of the 11 people who experienced the illusion, 9 felt more disgusted by the fake blood, vomit or feces when the brushing was in sync. In other words, when they felt like the rubber hand was their own, people also felt disgusted by what the hand was touching. "This is the first study to suggest that disgust is incorporated into one’s 'body image,'" Jalal says. Now at the University of Cambridge, he wants to use brain imaging to confirm what he's found. The body image—our sense of our physical selves—resides in the brain's parietal lobes, he says. The creepy fake bodily substances seem to have crept up there, too. Besides drumming up business for Halloween supply stores, Jalal says the findings could someday be useful for people with OCD. "Studying people in the general population is always a good first step, as these sensations and emotions are universal," he says. "You would expect that patients with OCD would feel even greater disgust and anxiety when the fake hand is contaminated." The main way to treat OCD is by gradually exposing patients to the things that bother them, then preventing their compulsive responses, such as hand-washing. But people often drop out of these treatments because they're too distressing, Jalal says. The rubber-hand illusion could help. Before putting something gross directly on a patient's skin, maybe doctors could put the substance on a rubber hand to desensitize the patient. (For anyone who finds rubber hands themselves gross, though, this might not work.)