To control cannibal toads, you just need the right bait 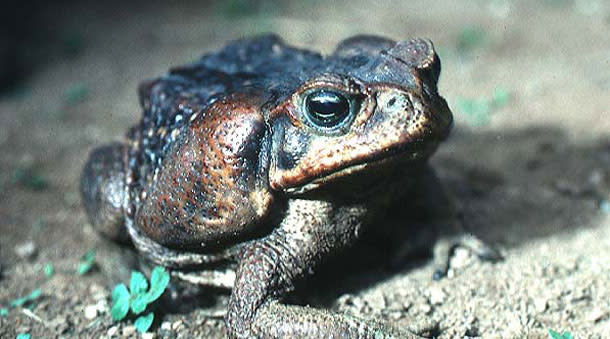 Australians love to destroy cane toads. Ever since these animals were first introduced in 1935, they have run amok, eating local animals and poisoning any that try to eat them. They’re captured and slaughtered in traps, bludgeoned with golf clubs, and squished with veering tyres, but still they continue to spread. Now, Michael Crossland from the University of Sydney has discovered an unlikely ally in the quest to control the cane toad: the cane toad. Along with their unappealing appearance and milky poison, cane toads are also cannibals. Older tadpoles will hunt and eat eggs that have been recently laid in the same pond, to do away with future competitors. Crossland reasoned that the eggs must release a substance that the tadpoles can detect, so he mushed them up in his lab and separated out their chemical components. He discovered that the eggs secrete bufadienolides – the same substances that make the milky poisons of the adult toads so deadly to Australia’s fauna. Ironically, the same chemicals that protect the eggs later in life also attract cannibalistic tadpoles. And that makes them excellent bait. Crossland’s team, led by uber-toad-wrangler Rick Shine, collected these chemicals from the poison glands of adult toads (you just grab one and squeeze its shoulder) and used them to bait simple traps – plastic boxes with funnels leading into them. They placed the traps in two lakes near the Adelaide River, and waited. As Crossland writes, the traps “rapidly caught tens of thousands of toad tadpoles, and very little else”. After two days, the number of tadpoles in the traps hit a plateau, which suggests that almost all the cane toads in the lakes had been snared. Indeed, the team couldn’t find any for weeks after the traps were laid. Best of all, there’s very little collateral damage for other species. A normal funnel trap would snare lots of native tadpoles and fish, but bufadienolides repel everything except cane toads. Between them, the traps caught over 42,000 cane toad tadpoles, but only 27 fish and 24 insects. Most attempts to control the toads have focused on killing the adults, and with good reason. The tadpoles compete so fiercely that removing a subset of individuals will only give the survivors an advantage, and possibly make them fitter. But Crossland’s team are optimistic that this won’t be a problem for their new strategy, which leaves very few, if any, survivors. The toxin-baited traps could certainly be improved. For now, the chemicals seem to last for a few days, and there may be ways of releasing them more slowly, so the traps don’t have to be replenished. Still, the basic methods are already very promising. Adult cane toads range far and wide, but they need to spawn in bodies of water and at this stage in their lives, they gather in predictable places. To build the traps, you need nothing more expensive than some plastic trays and funnels. To get the bait, you just need some toads, and the more adults you trap, the more easily you can eradicate their offspring. As Crossland writes, “the only significant costs are for labour”, and with many “toad-busting” community groups around, that’s not going to be a problem. Reference: Crossland, Haramura, Salim, Capon & Shine. 2012. Exploiting intraspecific competitive mechanisms to control invasive cane toads (Rhinella marina). Proc Roy Soc B. http://dx.doi.org/doi:10.1098/rspb.2012.0821Photo by Eli GreenbaumMore on cane toads: