Tiny Hummingbirds Are Marvels of Endurance 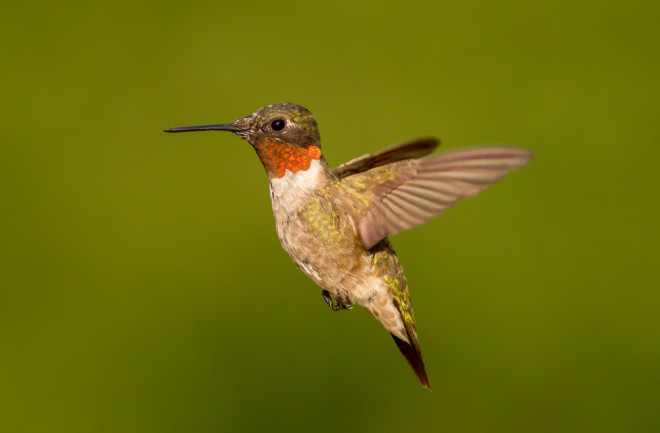 (Credit: Jack Dean III/Shutterstock) Ruby-throated hummingbirds are impressive birds. On average, they beat their wings 52 times per second. They can can reach flight speeds of up to 63 mph to evade danger. They're also endurance flyers. Every fall, ruby-throated hummingbirds make the long flight from the eastern U.S. to Central America to winter in warmer climates. And they may cover greater distances than previously thought, according to a new study which also sheds some light on how young hummingbirds handle the challenges of their first migration. When it comes time for their annual winter migration, these birds will start beating their wings and they won't stop until they've covered some 1,300 miles — not bad for a bird that weighs as much as three paperclips.

The Gulf or Bust

Ruby-throated hummingbirds are the only hummingbird species that breeds in the eastern U.S., and biologists still don’t know much about their migration habits. It’s not clear how often the birds stop along the way for food and rest, or how long they stay. Although their migration route follows the coast of the Gulf of Mexico, no one is sure yet whether the tiny birds fly over the Gulf or around it. A new study proves, at least, that most birds could make the lengthy nonstop flight across the water, as long as the weather was in their favor. A team of ornithologists, led by Theodore Zenzal of the University of Southern Mississippi, entered data from hundreds of ruby-throated hummingbirds into a simulator program that calculated how far birds could fly based on their wing shape, weight, and how much energy they stored in the form of fat. It turned out that on average, a ruby-throated hummingbird could fly about 1,300 miles (2,261 km) without stopping.

A Ruby-throated hummingbird is handled by a researcher prior to being released. (Credit: B. Dossman) “Our flight range estimates suggest that hummingbirds would be able to make the (roughly) 1,000 km flight, but those estimates are under still air conditions (no influence of wind),” says Zenzal. He estimates that it would take a hummingbird about 20 to 30 hours to fly across the Gulf. Of course, air conditions over the Gulf in early autumn aren’t usually still, and hummingbirds, thanks to their small size, are more affected by weather than larger birds. Additionally, although the average hummingbird can make the 1,300-mile flight, most hummingbirds aren’t average; some of the birds Zenzal and his colleagues studied had enough stored fat to fly twice that distance. Zenzal and his colleagues think that some hummingbirds make the crossing while others fly along the coast. “Evidence for trans-Gulf flights includes anecdotal observations of hummingbirds from oil rigs and boats in the Gulf, mainly during spring,” he said. “However, banding records from a station in the Yucatan show that peak hummingbird passage is about a month after peak passage at our Alabama study site. If birds were flying across then we would expect these dates to be much closer.”

To settle the question, Zenzal said, “​We would need tracking data from hummingbirds tagged along the Gulf.” Unfortunately, today’s tracking tags are too big for tiny birds like ruby-throated hummingbirds to carry. “It is more important to understand what areas hummingbirds are using in order to conserve stopover habitats for migrants,” says Zenzal.

Along the Gulf Coast, Alabama’s Bon Secour National Wildlife Refuge is a popular stopover point for ruby-throated hummingbirds on their way south. Zenzal and his team spent four seasons at the site, from 2010 to 2014, capturing, measuring, and banding 2,700 ruby-throated hummingbirds as they arrived. They weighed each bird and estimated how much body fat it carried, and took note of how long the birds stayed at the site to forage before moving on. They also measured each bird’s wingspan, shape, and area. The team published their results in a paper in the journal The Auk: Ornithological Advances. The researchers noticed that younger birds making their first migration arrived later and in worse shape than older birds that had been around the block a few times.

Ruby-throated hummingbirds migrate from eastern North America to Central America every autumn. (Credit: E.J. Lain) The more experienced birds arrived within a 35-day period from early September to early October, while birds making their hatch-year migration were spread out over 62 days from late August to late October. Most of the older birds had moved on again within a day, but the younger birds spent two days or more at Bon Secour. Much of the difference comes down to food. Long-distance flying takes a lot of energy, and birds store that energy as fat. Older birds were more experienced foragers, able to build up fat stores quickly and efficiently. Their seniority also affords them more social clout, allowing them to lay claim to the best food sources. Younger birds, that are still learning how to forage well, take longer to store up enough fuel for the flight, and they may not be able to build up stores that match the older, better-fed birds. Because they haven't learned the quickest path, young ruby-throated hummingbirds may also take less direct routes than their seniors. They’re a bit like college kids on a road trip: indirect routes, with more and longer stops. “Many of the challenges that migrants encounter are likely magnified for young, inexperienced birds, especially during their first migration in autumn,” Zenzal and his colleagues wrote in their paper.

Despite those challenges, first-time migrants turned up at Bon Secour in droves, outnumbering older birds 28 to 1. It’s not the first time that biologists have noticed that younger ruby-throated hummingbirds tend to hang out near the coast on their migrations, while older birds seem to prefer the inland sites. The researchers didn’t mention whether the older birds had any complaints about the youngsters’ loud music or late-night partying habits, but they have some ideas about why the coast is so popular with hummingbirds in their hatch-years. “It’s possible that young birds on their first migration may not recognize the Gulf of Mexico as an ecological barrier until over the water, and then redirect to the closest landmass,” they wrote. On the other hand, young hummingbirds on their first migration may just be using the Gulf coast as a landmark to keep from losing their way on the long trip. “Perhaps older birds depart inland sites and make trans-Gulf flights, whereas younger birds follow the coast around the Gulf of Mexico,” they wrote. “Younger birds may also rely on the coast for orientation as a leading line, whereas older birds may take a more direct route.” Coauthor Chris Clark said that further research could help biologists understand how young ruby-throated hummingbirds decide which routes to take, where and when to stop, and how long to stick around.