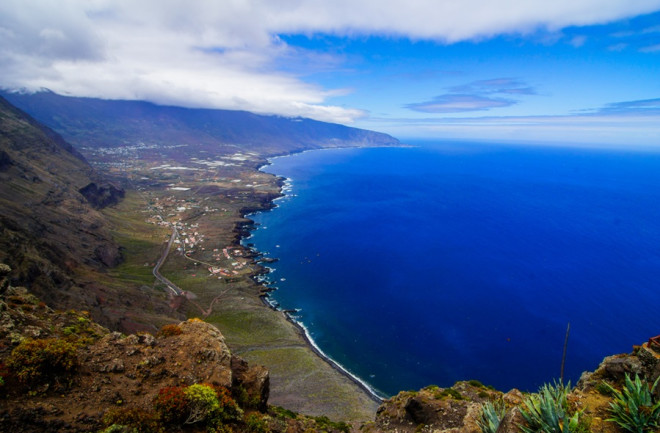 The Canary Islands, an autonomous community of Spain west of Morocco, spreads more than 300 miles across the Atlantic in an archipelago akin to Hawaii. Like the Aloha State, the Canaries were born from volcanoes — but researchers had debated exactly how.

When magma erupted from a crack in the ocean floor off El Hierro, the youngest, westernmost island, local volcanologist Vicente Soler headed out to sea, looking for answers. He found strange black rocks, some as large as soccer balls, floating in the bubbling, sulfurous seawater. He scooped them up with a fishing net.

It’s rare, but not unprecedented, for frothy magma to harden into rock so light it floats. But trapped inside the floating rocks was something even more unusual: quartz minerals and banding patterns found in sedimentary rock, which magma typically melts.

The banded sediments contained tiny fossils of single-celled creatures, says Uppsala University volcanologist Valentin Troll, part of the team that published its findings in January in Scientific Reports. Those fossils helped solve a question that’s dogged geologists for decades: How did the Canary Islands arise from the ocean depths?

The rocks’ sedimentary interior contained fossils of single-celled algae called coccolithophores (circled in red, right). Researchers dated the fossils based on different patterns of tiny plates that each species had evolved.

Based on the youngest coccolithophore present, it was determined that volcanic activity formed El Hierro in the last 2.5 million years. By contrast, the easternmost island has sediment that’s 20 million years old.

Since the island “birth order” moves from east to west, the Canaries must have formed as the continental plate drifted eastward over a stationary, periodically erupting plume of hot magma deep in Earth’s mantle.

1. In the months before an October 2011 eruption, magma from the upper mantle accumulated in a layer of oceanic crust 6 to 10 miles below sea level.

2. The magma moved up to a layer of sedimentary rock more than a mile thick and 4 miles below sea level. There, the magma broke off chunks of the rock, melting most of the material. It continued rising and hit seawater quickly enough, however, to preserve about 10 percent of the sedimentary rock.

3. The result: floating rocks that resemble a coconut — black and igneous on the outside, white and sedimentary on the inside, with enough trapped air bubbles to make them lighter than Styrofoam.

[This article originally appeared in print as "Rock of Ages."]