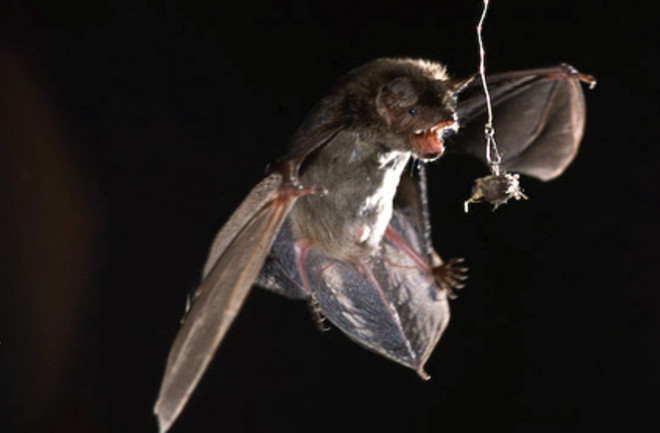 Bats may have a clever way of catching prey, but it turns out the tiger moth has some tricks of its own to avoid becoming a bat’s next meal. According to a study published in Science, the tiger moth disrupts the sound waves the bat uses home in on prey by emitting its own ultrasound blasts.

Researchers knew that the tiger moth emitted ultrasound waves, but they weren’t sure why. Previous studies indicated the moth’s sounds might serve to startle the bats, or warn them that the insects were unpalatable. The new research, however, tested both of these theories. The scientists had so-called big brown bats hunt tiger moths in a chamber fitted with ultrasonic recording equipment and high-speed infrared video. If the moth sound is used to startle bats, then in the chamber the bats should be disrupted on first attack, then learn to ignore the ultrasonic click, the team figured. That didn’t happen. If the moths’ clicks are warnings that the insects taste bad, then the bats should hear the click, bite the moth—and never do so again whenever they hear the sound. That didn’t happen either [National Geographic News].

Instead, the bats tended to miss the tiger moths when the insects emitted the ultrasonic cry. The scientists found that the tactic employed by the Bertholdia trigona tiger moth is the insect equivalent of electronic countermeasures used in modern warfare. Like signals used to jam enemy radar, the moth sends out beams of high frequency sound which interfere with the bats’ echo-location system [Telegraph]. Over time, these bursts of sound significantly decreased the number of moths the bats were able to locate and catch.

When scientists further investigated the way these moths produce sounds, they found that they are especially well-adapted to emitting the type of ultrasound waves that make it difficult for bats to find them. That’s because the moths make up to 450 clicks in one-tenth of a second. “That’s essential, because a bat’s entire attack sequence can last just one second, maybe two seconds on the long end, and so the moths have to be quick, listen to the bat echolocation calls and then figure out the right time to make the right sounds to jam them” [LiveScience], said researcher Aaron Corcoran.