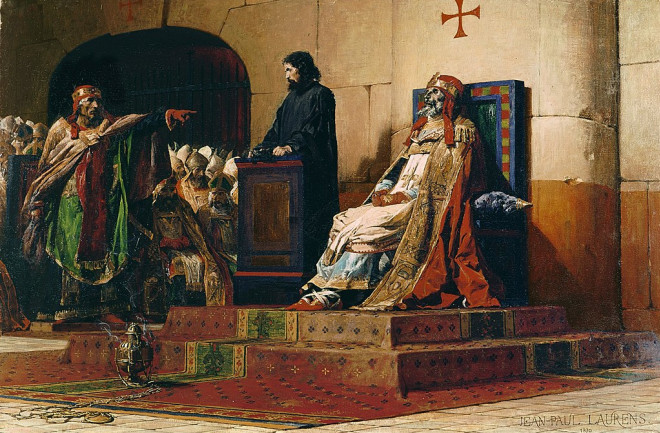 An 1870 painting of Pope Formosus at the Cadaver Synod by Jean-Paul Laurens. (Credit: Wikimedia Commons)

Digging up the dead is a grim practice. In the early days of medicine, students stole cadavers (often those of deceased Black people) in an effort to learn more about human anatomy. Within modern criminal cases, bodies of both the victims and the accused are often exhumed in an effort to establish innocence or guilt.

Meanwhile, some exhumations represent downright nasty instances of political jockeying in which the bodies of the dead have become pawns to the powerful.

Consider three of the strangest such incidents in history: the corpse of Italian Pope Formosus, who was dug up in the ninth century for a trial by his successor; the body of Dante Alighieri, whom Florence banished in life and spent years fruitlessly seeking in death; and Eva Perón, the first lady of Argentina who spent nearly two decades of her death in invisible exile in Italy.

The Return of a Perished Pope

Western Europe was highly tumultuous during the ninth century: Dynasties, kingdoms and empires continually rose and fell. In 896 C.E., Pope Formosus crowned a Frankish King, Arnulf, as the new Holy Roman Emperor. This was ill-received by the city of Spoleto, where the king of Italy and former Holy Roman Emperor Lambert had descended from.

While preparing to attack Spoleto, Arnulf fell ill and had to return to Germany. Formosus himself died not long later.

Lambert and the Spoletans were, unsurprisingly, not happy with Formosus, and they’d missed their chance for revenge. So Lambert asked Formosus’ successor, Stephen the Sixth, to dig up the former pope’s corpse and put it on trial at a gathering of bishops to decide some serious matter of faith. The resulting Cadaver Synod was a trial of trumped-up charges in which a corpse that had been buried for nine months — likely sporting bare, bleached bones — was placed in papal vestments on a throne to face his charges. Meanwhile, a deacon stood behind the corpse to give its answers.

Unsurprisingly, Formosus was found guilty: His election and acts as pope were declared invalid, his fingers of consecration were cut off, and his corpse was dragged through the streets of Rome and temporarily buried before it was dumped in the Tiber River.

This began an extremely tumultuous time in papal history. Pope Stephen was removed from office within months, and was later jailed and strangled to death. His successor, Pope Romanus, retrieved the body from the river. Pope Theodore the Second then reinstated Formosus and had his corpse reburied at St. Peter’s Basilica during his 20-day tenure. Between 896 and 904 C.E. there were no less than seven popes, some of whom had their predecessors murdered so they could attempt to seize the papacy.

No less bizarre — though considerably less bloody — was the battle over the body of Italy’s so-called secular saint, Dante Alighieri. He authored La divina commedia, or The Divine Comedy, and is undoubtedly one of the most famous writers of all time. His death, it turns out, was nearly as interesting as his well-studied life.

Born in Florence, Italy in 1265, Dante grew up fiercely proud of his city and its development. At the time, Italy was a fractious region: One was typically not loyal to the peninsula as a whole (which was not yet unified as a country), but to their city. He fought for Florence as a cavalryman, got married there, and did much of his writing there. He formed many of his closest and earliest friendships with leading Florentian intellectuals, such as Guido Cavalcanti, a famous poet.

It wouldn’t last, though. Florence’s political strife saw him exiled in 1302. After an effort to enact a military return failed, he turned to his work hoping his writing could secure his return. But it was not to be. Dante died in 1321 in Ravenna, Italy, the final city of his exile.

Dante’s fame soon burgeoned, and Florence began its attempts to reclaim its abandoned son. Two efforts in 1396 and 1429 failed. In 1519, Florence petitioned the pope to return Dante’s bones. The pope agreed.

But there was a surprise awaiting the papal delegation. When they arrived at the Basilica of San Francesco, they found the sarcophagus empty. Dante’s bones had been kept by Franciscan friars who, upon hearing the news of the incoming delegation, hid them in a hole in the wall before moving them into the monastery. There they remained until 1677, when a friar recognized the bones and put them on display.

A mausoleum was constructed for Dante’s remains in Ravenna in 1782, and they were transferred there. But in 1810, Napoleon Bonaparte, who was at this time at the height of his powers and losing patience with the Church, called for the suppression of religious orders: Properties held by these rulings were to be seized by the state and sold. Italy then fell under Napoleon’s sway, so to avoid tomb looting the friars moved the body into what was once a doorway between the Basilica and the Braccioforte Chapel.

His bones weren’t found until 1865, when they were reassembled and buried. There was to be but one more, brief disruption: The bones were removed in 1944 and buried nearby to keep them safe from bombing during the First World War. But they were returned in 1945.

Florence never did reclaim its errant son: The Basilica of Santa Croce’s magnificent tomb now sits empty. But every year, on the anniversary of Dante’s death, his hometown sends olive oil to be burned in a donated lamp in Ravenna.

From early-and-mid-century Europe we travel to 20th-century South America, when Argentina experienced great civil and political unrest. Eva Perón, once the First Lady of Argentina, would become a powerful symbol of dissent among the people — one that the ruling class sometimes felt threatened by. After her death, her symbolic power only increased.

Born in 1919, she worked as a radio performer before marrying Col. Juan Perón in 1945. A year later, he became president. She held considerable political power as first lady, and Perón awarded generous raises to unions to win their support. After cutting off funding for the traditional aid societies, she created her own Eva Perón Foundation, which built thousands of hospitals, schools and orphanages, among other institutions. She formed the Peronista Feminist Party in 1949 and is considered largely responsible for passing women’s suffrage law in Argentina.

In 1952, Perón died of cancer at just 33 years old. But death did not diminish her powers; rather, it accomplished quite the opposite.

In 1955, the military seized power in Argentina and General Eduardo Lonardi established a military dictatorship. Juan Perón was forced to flee the country, and Eva Perón became a posthumous symbol of resistance. Her followers even tried to have her canonized. But because they sensed a threat to their power, the military stole her body and hid it in Italy for 16 years.

It wasn’t until 1971 that another military government would finally return her body to Juan Perón, who was living in exile in Spain. Perón eventually returned to Argentina and became president again in 1973, though he died just a year later. His third wife and vice-president, Isabel Perón, thereby became the world’s first female president in 1974. In an attempt to win popular support, she had Eva's remains buried with Juan’s in the presidential palace.