Three groups of fish are actually the males, females and larvae of one family

The tapetails (Mirapinnidae) are very different - they also lack scales but they have no lateral lines. They have sharply angled mouths that give them a comical overbite and long tail streamers that extend to nine times the length of their bodies.

The bignoses (Megalommycteridae) are very different still - unlike the other two groups, they have scales, their mouths are small and their noses (as their name suggests) are very large.

Based on these distinct bodies, scientists have classified these fishes into three distinct families. Now, it seems they are wrong. Amazingly enough, the three groups are all just onesingle family - the tapetails are the larvae, the bignoses are the males and the whalefishes are the females. The entire classification scheme for these fishes needs to be reworked, as many distinct "species" are actually different sexes or life-stages of the same animal. 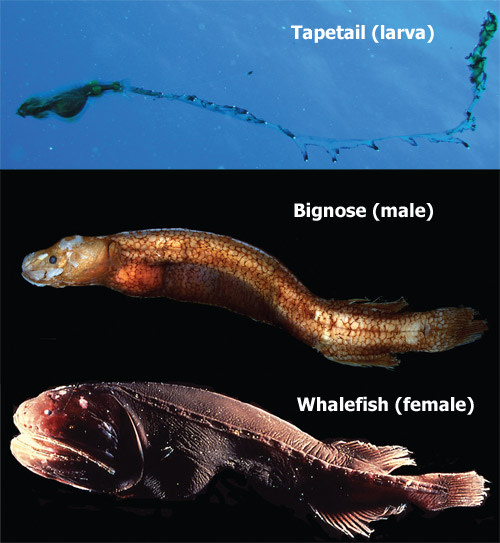 Each form has such different lifestyles and diets that the larvae undergo dramatic transformations as they mature, completely remodelling their skulls and organs in order to prepare for their new lives. Males go through the greatest changes. Their jaw bones waste away, their mouths shrink, their intestines shrivel, and their food pipe and stomach disappear altogether. Once the transformation is complete, they will never feed again. Their chest cavity is filled with sexual organs and a massive liver that sustains them - they are little more than swimming sperm factories.

To power this lifelong fast, some young tapetails gorge on small crustaceans called copepods. They eat so many that they develop enormous potbellies and it's this stored food that creates the male's enormous liver. Tapetails that grow up to become female whalefishes don't need such extravagant stores - they continue to eat throughout their adult lives and as a result, they become the biggest of the three forms.

This metamorphosis is completely unparalleled among back-boned animals, and it has fooled biologists for decades. In retrospect, however, all the clues to this astonishing life cycle were there.

So far, 120 specimens of tapetails have been collected (five species in total) and all are sexually immature. In over 600 whalefish specimens across 20 species, no one had ever found any larvae or any males - all of them were sexually-mature females. And all the 65 specimens of bignoses (across four species) are male. Tapetails have only ever been found in the topmost 200m of ocean, while bignoses and whalefishes lives in lower waters of 1000m or deeper.

Based on the odd physical similarity, some scientists had suggested that these groups may be one and the same, but there wasn't any good evidence to back that up until 2003. Then, a Japanese group led by Masaki Miya found that a whalefish and a tapetail had almost identical genomes in their mitochondria (small structures within all animal cells). Now, David Johnson from the Smithsonian Museum, working with Miya's group, has settled the issue.

He found three specimens - two bignoses and one whalefish - that are clearly tapetails which have been caught mid-makeover. One bignose, Megalomycter teevani, still retains the vertically angled mouth of its former self and traces of pelvic fins, which the larval tapetails have but the adult bignoses don't. It's eponymous big nose is only half-grown. The other bignose species - Parateniophorus gulosus - is in a similar but earlier stage of transformation. The whalefish specimen belongs to the most common species, Cetostoma regani, and while none of the other 184 specimens have any pelvic fins, this one does.

Johnson backed up this physical evidence by sequencing the mitochondrial genomes of several species from all three groups. He used these to build a family tree, which clearly showed that P.gulosus is, in fact, the same species as C.regani.

Other species can also be merged together. For example, Johnson's family tree shows that Eutaeniophorus (a tapetail), Ataxolepis (a bignose) and Cetiomimus (a whalefish) are all actually the same genus. Clearly, the entire group's classification needs to be reviewed, and that can only be done by finding more specimens and taking more samples.

If anyone wants to know more about deep-sea marine life, I wholeheartedly recommend heading over to Deep Sea News, a truly first-class blog that's just been recently set up on its own website.