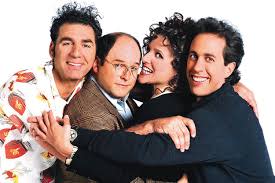 The TV show "Seinfeld" had its share of eccentric characters, from the Soup Nazi to Kramer himself. Fortunately, these medical school faculty recognized the potential in the show to help teach psychology to their students. Behold: "Psy-feld", the series of lessons that uses various peripheral Seinfeld characters (who all happen to be Elaine's friends/boyfriends) to teach about delusional disorders. Be sure to check out the amazing overview table below!Psy-feld: An Innovative Didactic Using the TV Show Seinfeld to Teach Delusional Disorder Subtypes "Objective The primary purpose of this article is to introduce Psy-feld, an innovative didactic used to review mental disorders through discussion of the interpersonal relationships of the fictional characters created in Larry David’s situational comedy, Seinfeld. To introduce this novel didactic, several peripheral Seinfeld characters were selected, who while not afflicted with a psychotic disorder, demonstrate traits that serve to facilitate discussion to review the different subtypes of Delusional Disorder. Methods Psy-feld is a 30-min faculty-facilitated didactic where a selected episode of the sitcom allows for review of multidisciplinary content areas considered germane to the practice of psychiatry. At Rutgers-Robert Wood Johnson Medical School, 104 third-year medical students rotated on the Consultation-Liaison Service from July 2011–March 2014 and participated in Psy-feld. Results Of the 104 students who participated in Psy-feld, 99 completed surveys on the didactic. Students found the didactic to be of high quality, believed it enhanced their learning, and thought that it prepared them for their final SHELF exam. Students also found it enjoyable and preferred the didactic to more traditional forms of teaching such as large group lectures. Conclusions Psy-feld is an example of an innovative teaching method that medical students found informative in reviewing teaching points of Delusional Disorder." Bonus table from the main text: 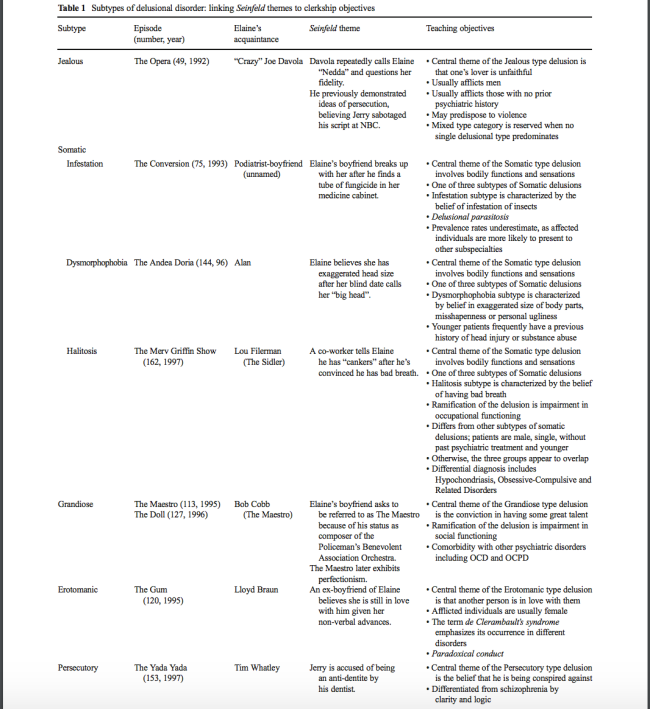