This Map Shows Every Volcanic and Seismic Event Since 1960 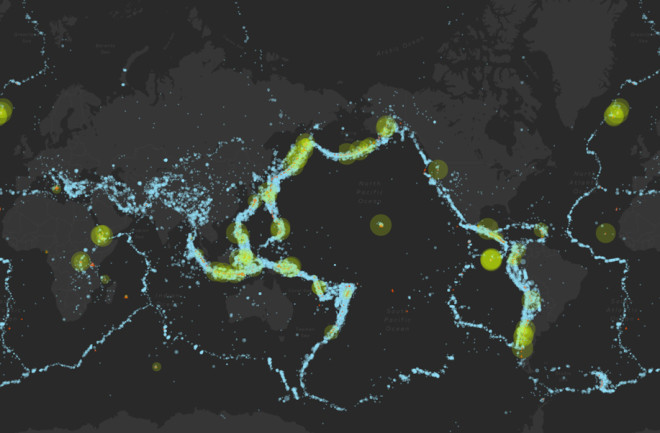 It’s easy to forget if you live far from a fault line, but Earth has a heartbeat you can feel.

At the junctures between continental plates, slippages create earthquakes and magma boils up from below in a never-ending process of creation and destruction. Now, for the first time, a global visualization of seismic and volcanic data lets us spy on the planet as it moves and shakes.

The interactive map, from the Global Volcanism Program at the Smithsonian’s National Museum of Natural History tracks every recorded volcanic eruption, earthquake and major sulfur dioxide emission since 1960. Sulfur dioxide emissions, caused by volcanic activity, appear beginning in 1978, when satellites started recording global data in the ultraviolet spectrum of light. The project combines data from the program with information from the U.S. Geological Survey and NASA satellites.

In the E3 (earthquakes, eruptions and emissions) map, earthquakes appear as blue circles, volcanic eruptions as red triangles, and SO2 emissions are large yellow circles. You can view the sum total of seismic events all at once, or you can watch the eruptions and earthquakes stack up as the years wear on. Clicking on individual eruptions after 1978 will allow you to watch how the sulfur cloud appears and dissipates over time.

The end result is a map that clearly delineates the Earth’s fault lines. Seismic events cluster along the west coast of the US and run down the edge of South America. A similar line divides Africa and the Americas and another circles around Australia. Volcanic hot spots appear in Iceland, Indonesia, the Aleutian islands and the tip of South America.

Speaking to the Washington Post, Elizabeth Cottrell, the director of the Global Volcanism Program, says the map is the first time these three separate but interrelated phenomena have been visualized together. She hopes that the data will be useful to researchers attempting to figure out the relationships between the three — for example how earthquakes are correlated with volcanoes. The larger goal is to better predict when and where these events will occur, and how severe they will be.

The team is hoping to extend their data set beyond 1960 using a combination of historical records and stratigraphic observations. Their website already includes a list of all the known volcanoes to erupt during the Holocene, and they hope to flesh the data out as they progress.