This Is Not The Yeti You're Looking For 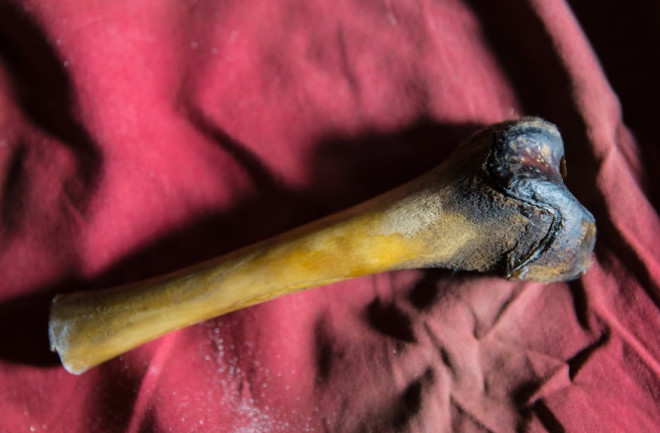 A partial femur collected from a cave in Tibet allegedly belonged to a yeti, the infamous cryptid also known as the abominable snowman. DNA tests showed it was from a Tibetan brown bear. (Credit Icon Films Ltd.) Researchers took another crack at hair, bone and other samples allegedly from the yeti, or abominable snowman, of the Himalayas. The analysis was the most sophisticated to date but — spoiler alert — the results won't thrill cryptozoology fans. The study did reveal, however, an evolutionary plot twist of scientific significance. The wild man of the snows, the glacier spirit, the abominable snowman...the yeti. The mysterious creature purported to dwell in the mountains of Tibet, Nepal and Bhutan has captured human imagination for centuries. Long before Western explorers claimed to have spotted its tracks through deep snow, local residents have revered and sometimes feared the mythic beast. And occasionally, locals and foreign interlopers alike have collected what they believed to be physical proof of the yeti's existence: a few hairs, a partial bone, a scrap of scalp, even feces. With the advent of DNA analysis, researchers began testing these alleged yeti bits with mixed results. In 2014, for example, scientists found that two samples allegedly from an "anomalous primate," aka the yeti, were genetically most similar to ancient DNA retrieved from the remains of a 40,000-year-old polar bear. The conclusion stirred up a bit of excitement, leading to the suggestion that the yeti was some sort of archaic bear hybrid or previously unidentified species. Later that same year, a second team analyzing some of the same material reported it was closest genetically to the Himalayan brown bear (Ursus arctos isabellinus), an animal native to the areas in which the samples were collected. In other words, the simplest explanation is usually the most likely. Occam's Razor and all that.

The Himalayan brown bear has long been associated with yeti lore by local populations, and recent genetic analysis, er, bears out that link. (Credit Abdullah Khan, Snow Leopard Foundation)The Evidence Brought To Bear But you know how we humans are. We want to believe. So interest in the yeti has persisted both in pop culture and among researchers. Published today in Proceedings of the Royal Society B: Biological Sciences, a new study looked at 24 samples, half collected during a Himalayan brown bear study in Pakistan, three from other bears and nine allegedly from yeti. (Although one of the yeti samples turned out to be from a dog. Woof.) The team performed a more sophisticated analysis on the bear and "yeti" samples than previous studies did, obtaining complete mitogenomes (from maternally-inherited mitochondrial DNA) rather than short sequences. The results: the "yeti" samples that weren't from a dog were all from bears, specifically Asian black bears, Himalayan brown bears and Tibetan brown bears. No sign of an anomalous primate here, folks.

It is absolutely abominable that I would include this image in a post about serious scientific inquiry regarding the yeti. You're welcome. (Credit Rankin/Bass Productions)Evolutionary Plot Twist While the results will likely disappoint anyone hoping for proof of a wild man-ape-bear creature roaming the mountainous region, the study does reveal a surprise about the Himalayan brown bear and bear evolution in general, which has been a tricky thing to map out due to hybridization in the wild and a general scarcity of data. The mitogenomes generated in the study show that the Himalayan brown bear branched off on its own from the rest of the bear family tree much earlier than thought: about 650,000 years ago. Although the Himalayan brown bear's territory is geographically close to that of the Tibetan brown bear, the two brown bear subspecies are not close genetically. The Tibetan brown bear is actually closer kin to Eurasian and American brown bears. According to the new research, Himalayan brown bears are a relic population that was likely isolated during a period of glaciation. Cut off from other bear populations, the animals went their own way genetically. Other brown bear populations moved into the Himalayas thousands of years later, but the difficult terrain kept the Himalayan subspecies isolated. The discovery has important implications for conservation of the Himalayan relic subspecies, which is critically endangered. It's worth noting, in the interest of full disclosure and all, that both the controversial 2014 study and today's research received funding (and some of the samples) from Icon Film Company, an outfit that has stoked public interest in the yeti with a couple programs on the topic.