This Evidence Upended Theories on the First Animal to Reach Land

While Tiktaalik and Icthyostega often get the credit, fossils have shown that arthropods likely beat them by hundreds of millions of years. 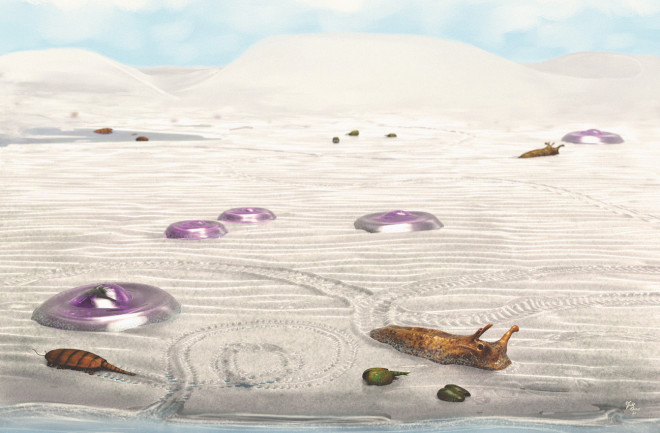 A reconstruction of tidal flat at Blackberry Hill around 510 million years ago that includes a euthycarcinoid in the bottom left. In the distance, euthycarcinoids occupy a small pool before it dries up. (Credit: Kenneth Gass)

Scientists still debate where exactly life on Earth began — some argue that deep-sea thermal vents are the best candidates, while others suggest that Darwin’s “warm little pond” theory is more likely. Still, it’s usually agreed that complex life arose in the oceans.

But which animals first made that dangerous foray onto land, leaving the only home complex life had ever known? And why?

Google it and you’ll see suggestions that Tiktaalik or Ichthyostega were the first explorers to break that barrier. But in fact, the arthropods may have beat them by hundreds of millions of years, and for a particularly odd reason: Rather than trying to leave the water, they were perhaps trying to dip back into it.

Kenneth Gass, an honorary curator at the Milwaukee Public Museum’s geology department, has researched trilobites for the past three decades. In his work, he came across repeated mentions of a quarry at Blackberry Hill in Marathon County, Wisconsin. It’s recognized as a treasure trove of Cambrian-era fossils, especially trace fossils, Gass explains.

Many trace fossils are difficult to see except during dawn and dusk, when the low-angled sunlight casts them into sharper relief. When Gass visited Blackberry Hill for the first time in 2006, he saw how the site had acquired its reputation. “By the time sunset came around, I saw these things popping out all around. You could almost imagine them crawling up your leg,” Gass says. “You’re right back to Cambrian times, half a billion years ago.”

Paleontologists had three main questions about the first animal to depart the oceans: when it happened; which animal did it; and why they left in the first place. “All three were answered at Blackberry Hill,” Gass says.

By this point, the “‘when” had long been answered, he says. Trackways left in Cambrian-era tidal flats were found in Ontario and Quebec in the 19th century. They were initially attributed to various kinds of arthropods but were eventually linked to the euthycarcinoids, the ancestors of the centipedes and millipedes (which, interestingly enough, are all terrestrial).

But euthycarcinoids had been somewhat overlooked, Gass says. Lacking body fossils to pair the trackways with, much of the scientific community had simply lost interest.

It wasn’t until Blackberry Hill that interest would be revived — with the discovery of the “who.” Peculiar trace fossils found in 2002 at Blackberry Hill by geologist James Hagadorn and colleagues suggested the presence of a scorpion-like arthropod that wore a snail shell, somewhat like a hermit crab. But no body fossils, a more definitive form of proof, had been found.

On his first visit back in 2006, Gass found a body fossil of the euthycarcinoid Mosineia macnaughtoni in the same strata of rock that contained those mysterious trace fossils. And two years later on a return visit, his son Todd Gass found what Kenneth calls the “Rosetta Stone” fossil: impressions of the tail of that euthycarcinoid caught in the act of producing those trackways.

As it turned out, Mosineia macnaughtoni was most likely the culprit, Gass and his team reported. “Blackberry Hill verifies the identity of the first animal that we know of that walked on land,” he says.

Blackberry Hill had further riches to offer. In the Cambrian era, it was a monstrous tidal flat that extended for miles inland. The area was very flat and barren of vegetation since land plants had yet to evolve. These conditions allowed it to produce unusually clear fossils of both tracks and animals themselves.

As for the deepest mystery of all: The first animals left the water by accident, Gass and his colleagues recently suggested. In the Cambrian era, the moon was closer to the Earth than it is now, so the tides were very strong and could reach farther inland.

And the trace fossil that Gass found suggested the ancient arthropod had been holding its tail to the side in a peculiar way. While it’s possible it was protecting its eggs, Gass says that evidence of nests or eggs have failed to materialize. Mortichnia, or death traces, found in Brazil from similar animals living in the same era suggest a simpler explanation: The animals were stranded and trying to return to the water, and the odd tail position may have resulted from feeling disoriented.

The moon’s powerful influence on the tides could have either created waves that dragged the animals inland or left them high and dry when it receded. Either way, the ability to survive outside of the water would have offered a significant advantage, Gass says. “Euthycarcinoids were built to get up on their feet and move about freely,” he notes. “This mobility helped them get to the safety of tidal pools before their gills dried out.” Those were likely the first steps towards full terrestrialization.

While many other arthropods followed in their footsteps before vertebrates started moving toward solid ground, it may be the case that all of that land-dwelling was kicked off unintentionally.