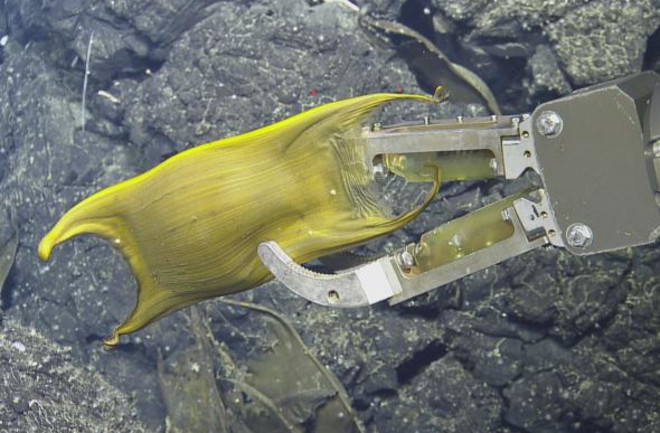 A Pacific white skate egg collected from the seafloor by an ROV. (Credit: Ocean Exploration Trust Inc.) The oceans are largely unexplored, but if you want to find something interesting, there's no better place to visit than a hydrothermal vent. Often marked by dark plumes gushing into frigid water, the vents mark spots where magma rises close to the seafloor and heats the water to temperatures that can reach over 750 degrees Fahrenheit. Warmth and nutrients from the vents provide the basis for a vibrant deep-sea community, populated by creatures that often never see the sun's light. And, for some animals, these vents have become the ideal nursery.

Researchers from the Charles Darwin Research Station in the Galapagos ventured to a deep-sea vent field just north of the islands with an ROV. There, a mile beneath the waves, they found a jumble of yellow casings, which looked something like pillows with little antennae, scattered about the seafloor. Though they've been called "mermaid's purses" for their appearance, what the researchers had actually found was eggs — over 150 of them — from the Pacific white skate, a relative of sharks that looks something like a stingray. This particular species is known to mostly inhabit the deep oceans, and sightings are consequently rare.

A different species of skate, Raja undulata. (Credit: Vladimir Wrangel/Shutterstock) Though the researchers didn't find any of the skates nearby, the huge cluster of eggs betrayed their presence. In research published Thursday in Nature Scientific Reports, they theorize that the skates are using the vents like incubators to warm their eggs and speed up hatching times. Cold temperatures slow the processes of life down — animals in cold places seem to live longer as a result — and temperatures in the deep ocean verge on freezing. The result is eggs that take an abnormally long time to hatch. Another closely related species of skate lays eggs that don't hatch for over three years, and because the water here is colder, the researchers think that Pacific white skate eggs might take even longer to hatch — more than four years total.

Placing their eggs near hydrothermal vents, where the water is warmer, though not by much, could accelerate the development process and cut down on the time the eggs must sit unattended. Because skates don't brood their eggs, the unhatched offspring are vulnerable to predators or misfortune, so the less time they sit around for, the better. Egg casings whose inhabitants had already hatched were littered around the site as well, indicating that skates had been coming to this site to deposit their eggs for at least several years. Most of the eggs were located near to the vents, where the water is warmest, adding weight to the researchers' theory that the placement was intentional. When we say "warm," though, it's pretty relative. The ambient water temperature at the site was about 37 degrees and the water by the vents was only a few degrees warmer. It's the first time such behavior has been reported in the ocean, although it's been documented before on land. Megapode birds on the island of Tonga in Polynesia dig their eggs into geothermally-warmed soils, and a species of dinosaur was thought to do something similar as well. Several other reptile and bird species are known to seek out warm soils for their eggs as well. Hydrothermal vent sites may hold other advantages for offspring as well — such as more readily available nutrients or prey — though the researchers aren't sure yet. They end with a note of caution regarding the skate nursery: Hydrothermal vents are often targeted by deep-sea mining companies for the minerals that accumulate there. Though the skate eggs the researchers found lie in a protected area, others might not be so lucky.