A long-toed bird preserved in amber from Myanmar is the first of its kind. 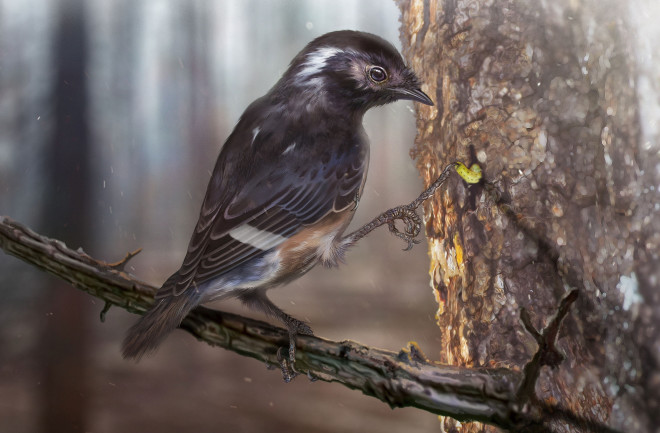 Smaller than a sparrow, a 99-million-year-old bird preserved in amber made some very big news in July.

“I’ve never seen anything like this, or even close,” says paleontologist Jingmai O’Connor of Beijing’s Institute of Vertebrate Paleontology and Paleoanthropology. O’Connor is a co-first author on the Current Biology paper that introduced the world to Elektorornis chenguangi, a new species of Cretaceous bird known from a single partial specimen.

A long-toed bird preserved in amber from Myanmar is the first of its kind. (Credit: Lida Xing)

Frozen in time in a piece of Burmese amber, the single hindlimb of Elektorornis has traits not seen in any other bird, living or extinct. The animal’s third toe is extremely elongated — longer than the entire lower leg bone. And on this bizarre supertoe are strange filaments so unique they’re hard to describe, even for researchers studying them: “Imagine a scale on a chicken foot in which the distal end tapers into a very fine, almost hairlike bristle,” says O’Connor.

These hairlike, yet also scalelike, structures are at the base of the bird's unique toe. Which brings us to the big question: How did Elektorornis use that digit?

Without any similar bird to compare it with, O’Connor and colleagues looked to the only living animal with a single elongated digit: the aye-aye, a species of lemur that uses its long third finger to probe for insects in rotting wood. However, the mammal also has a mouth made for gnawing, so the parallels with a toothless bird only go so far.

And so, for now, the true purpose of Elektorornis’ bristled supertoe will remain a mystery — and a source of scientific delight.

“I love that new discoveries still reveal animals so outside our expectations,” says O’Connor. “Our imaginations are so limited compared to the bizarre forms natural selection can produce.”

This story was #36 in our top science stories of 2019. Editor's Note: This story has updated from an earlier version to include additional images.