This 4-Legged Snake Was a Hugger

Legs of 272-vertebrate animal may have been used for mating or seizing prey. 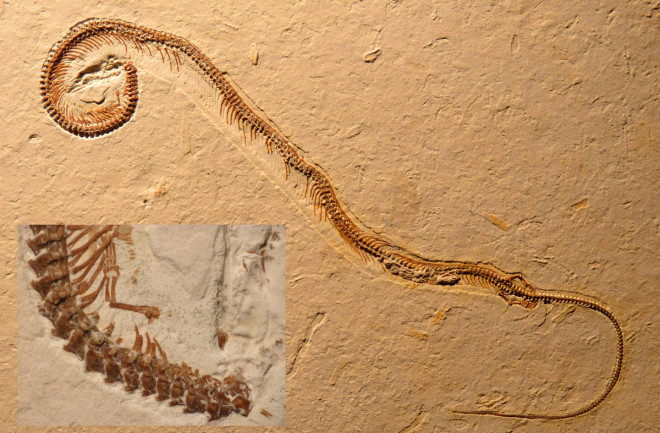 The 8-inch fossil (above) of the 272-vertebrate Tetrapodophis amplectus features tiny claws and elongated hand bones (inset) that researchers contend were likely used for burrowing. Some experts are not convinced that the fossil is a proto-snake. | David Martill/University of Portsmouth (2)

Sign up for our email newsletter for the latest science news
An illustration shows the four-legged snake Tetrapodophis amplectus holding a mammal in a tropical forest in Gondwana, about 120 million years ago. The legs are thought to have been used during mating and for seizing prey. | Julius T. Cstonyi

In 2011 British paleobiologist David Martill led his students on a field trip to a German museum to see the famed feathered dinosaur Archaeopteryx. But it was the 8-inch specimen labeled “unknown fossil” that caught his eye.

In a study published in July, he and a team identified four legs on the 272-vertebrate fossil, with hind legs nearly twice the size of the front legs. The scientists suspect that the legs were used for seizing prey or clasping during mating. “Our specimen suggests that snakes achieved many of their snakelike features before the legs disappeared,” Martill says.

The 8-inch fossil (above) of the 272-vertebrate Tetrapodophis amplectus features tiny claws and elongated hand bones (inset) that researchers contend were likely used for burrowing. Some experts are not convinced that the fossil is a proto-snake. | David Martill/University of Portsmouth (2)

Some experts are not convinced it’s a proto-snake, but Martill and his colleagues identified several features unique to snakes. Like snakes today, the teeth on the roughly 120-million-year-old Tetrapodophis amplectus — translated loosely as “four-legged hugging snake” — are welded to the jaw and directed backward, and there is a single row of belly scales.

The fossil also could shed light on the debate over whether snakes evolved from marine or terrestrial reptiles. The specimen’s tiny claws and elongated phalanges would likely be used for burrowing, as opposed to paddling through water, says Martill.