Things May Be Brewing at Hawaii's Kīlauea

It has been quiet at Kīlauea for the past few months, but new earthquakes at the summit suggest that a new eruption could be in the works. 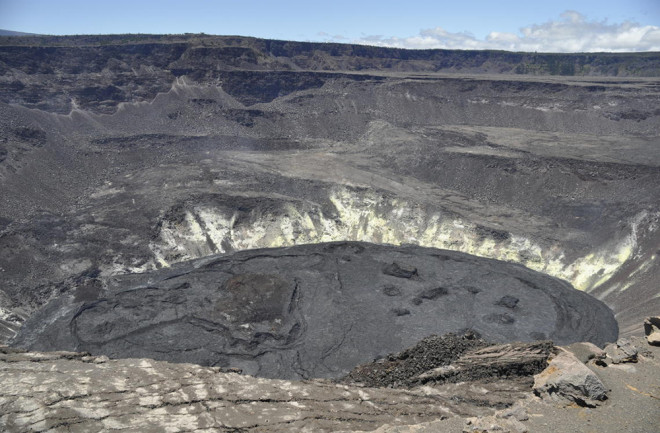 The cooled surface of the lava lake that formed in early 2021 at the summit of Kīlauea in Hawaii. Credit: USGS/HVO.

For much of the first half of 2021, a lava lake sat perched within Kīlauea's summit Halema'uma'u crater. Since May, the Hawaiian volcano has mostly fallen quiet but it seems like that could be changing. The USGS Hawaiian Volcano Observatory has upped it's alert status for the Big Island's most active volcano to orange after a swarm of earthquakes rattled the summit area over the past few days.

Swarms of earthquakes are common on Kīlauea. Sometimes they are related to faults that cross the island, created due to the weight of the volcanoes on the Pacific plate. This is why Hawaii sometimes feels fairly large earthquakes up to M5.

The other type of swarm is related to magma moving under your feet. As it rises, it has to make space for itself, so the hard crust cracks under the pressue of the intruding magma (which, remember, is molten rock). Tack on the pressure created by any gases being released by the magma as it is rising, and swarms of small earthquakes can be the harbinger of magma on the move.

If those swarms are near the surface, especially in places where eruptions are common like the summit of Kīlauea, then it might be time to start thinking about a new eruption. That's what started happening on August 23, when hundreds of small temblors rattled the southern side of the summit caldera.

A map showing the location of earthquakes at the summit region of Kīlauea in Hawai'i during mid-August 2021. Credit: USGS/HVO.

That alone might not be enough to make the case for increasing the alert status, but the volcano has also been showing inflation, meaning the land surface is moving, likely in response to new magma making its way into the summit. The preliminary interpretation of these events is that magma intruding under the volcano around 1 mile (~2 km) below the crater.

So, what does this mean? The hardest thing is knowing both if and when an eruption might start. Intrusions like this can happen without an eruption -- in a sense, the magma stalls before reaching the surface. However, as hot, gas filled magma continues to intrude, it is hard to keep it in the ground. If this activity continues, then it might point to an eruption soon.

The next few days will be important for determining if that eruption is coming. We might expect to see earthquakes continuing and the volcano continuing to inflate. We might also start to see increasing gas emissions at the summit that are coming from this new magma. The volcanologists at HVO will be watching all these signs closely to try to narrow down the chances of eruption. We'll see if Kīlauea is ready to come back from its summer vacation.

Across the Pacific, Japan has been witnessing the birth of a new, and likely temporary island. The eruption of the submarine volcano Fukutoku-Okanoba, just northeast of Iwo Jima (another volcanic feature) sent an ash plume into the strastophere a few weeks ago. The eruption is still discoloring the water around the new island, which is mostly made of loose volcanic debris like pumice and ash. Some of this pumice has also floated off to create a pumice raft.

The small island formed by the August 2021 eruption of Fukutaku-Okanoba in Japan. Credit: Japanese Coast Guard.

These submarine explosive eruptions happen relatively frequently in the western and southern Pacific, where erupting lava and water can mix in shallow waters, enhancing the already explosive nature of the lava. Once an island forms, the eruption might get less explosive. The islands produced don't tend to last as waves wash away the loose debris, so unless the eruption can keep replenishing, these volcanic islands vanish until the next blasts. This is the likely fate of the Fukutoku-Okanoba island we're seeing today.