They're Ants That Collect Skulls. Now We Know How And Why.

These skull-collecting Formica archboldi from Florida are proving to be more than just generalists. 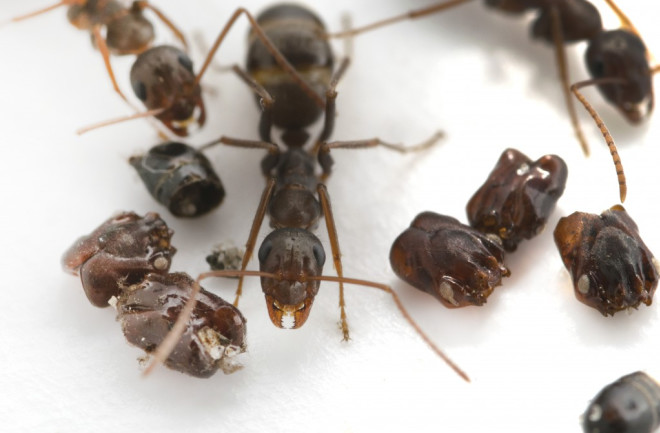 A member of Formica archboldi, Florida's skull-collecting ants, next to trap-jaw ant heads that are found throughout its underground nest. (Credit: Adrian Smith)

For 60 years, scientists observing Formica archboldi, a species of ant native to Florida, have documented something…odd. The ants’ underground nests are littered with skulls and other body parts, primarily of Odontomachus, trap-jaw ants. Trap-jaws are formidable predatory badasses. F. archboldi are not. So what’s going on? A new study sorts out the mystery — but discovers an even bigger oddity.

[Update for the TL;DR crowd: The skull-collecting ants appear to be trap-jaw ant prey specialists, which is unusual. They appear to have more effective techniques for immobilizing the trap-jaws. Once immobilized, they take the trap-jaws back to their nests and dismember them, treating them as prey. They do not eat the heads, so the heads are left behind. That’s not nearly the most interesting thing the researcher reported in the study, but whatevs.]

Of the 15,000 or so ant species out there, relatively few are prey specialists. Although there have been documented millipede-munchers and termite-crunchers, most ants are generalists when it comes to what they eat. Finding a lot of decapitated heads in an ant nest does, however, tend to make researchers curious about the matter.

There have been no documented predator-prey interactions in the wild between skull-collecting and trap-jaw ants. But entomologists hypothesized that F. archboldi might just be a prey specialist of trap-jaw ants, a particular rarity within its generally-generalist subfamily.

What’s especially peculiar about going after trap-jaws is that these ants are no easy targets. Members of the trap-jaw genus Odontomachus sport spring-loaded mandibles that they use both defensively and for capturing prey, striking more than 41 times per second. Like the Dread Pirate Roberts, they’re not to be trifled with.

Two trap-jaw species, found in close proximity to the skull-collectors, were sampled for the study. And Smith discovered that a certain biochemical profile of skull-collecting F. archboldi was a close match to that of the Odontomachus found at the same site.

Ants, like all insects, are coated in a layer of wax called cuticular hydrocarbon. The waxy stuff probably first evolved to prevent the animals from drying out. Over time, however, many insects have come to use the layer as a means of communication, to distinguish reproductive status, for example.

However, previous research on trap-jaw ants has shown that, within both the genus and specific species, cuticular hydrocarbon profiles can vary. The profiles can be used to distinguish between nestmates and outsiders, for example. The Florida trap-jaw ant O. brunneus, the most prevalent Odontomachus species that overlaps with Formica archboldi, has high levels of hydrocarbon variation between populations.

Smith found that the hydrocarbon profiles of the skull-enthusiast F. archboldi he collected were not only remarkably similar to that of Odontomachus, but that these chemical signatures varied from one location to the next, mimicking the variation seen within O. brunneus between those same sites. In other words, across populations, the chemical calling cards of F. archboldi were more similar to that of their neighboring Odontomachus than to other populations of their own species.

And don’t think it’s living in a similar environment or having a similar diet that results in similar chemical profiles. Smith found that the F. archboldi ants retained their trap-jaw-like hydrocarbon profiles even after living in the lab for several months.

To test what advantage this might provide, and to figure out if it explained the whole deal with the Odontomachus heads piled up in the skull collectors’ nests, Smith built a kind of ant Thunderdome.

In a series of contests, Smith paired one live trap-jaw ant and one live Formica ant — either the skull-collecting F. archboldi or F. pallidefulva, which also shares territory with the same Odontomachus species but has no known association with the trap-jaws. The insects were placed in a “28 mm test arena” where their subsequent “aggressive interaction” was filmed at high speed. The ants were, however, immediately separated after the dust-up.

Smith found that in 1 out of 10 contests, F. pallidefulva successfully bested the trap-jaw ant, which was unable to walk around the arena afterward but was not fully immobilized.

The stats were a little different for F. archboldi, however: In 10 out of 10 contests, the trap-jaw ant was unable to walk around the arena and, in 7 of those 10 matches, the trap-jaw was completely immobilized.

If you’re imagining ants ripping each other apart, hang on. That’s not what the contests were about. Both Formica species use formic spray to immobilize prey and also as a defense. The chemical composition of the spray is the same for both species, so F. archboldi‘s kickassery is not down to using some extra-potent formulation. Smith believes that F. archboldi might just be more efficient at spraying, though more research needs to be done.

In another experiment, when presented with freshly freeze-killed and thawed trap-jaws (simulating an immobilized ant), F. archboldi ants happily took the insect into their nests, decapitating it and treating it as prey. This behavior explains how so many trap-jaw heads turn up in their nests in the wild. And, along with their more efficient trap-jaw takedowns, it offers support for the idea that the skull-collectors are rare prey specialists.

Nope, those aren't raisins. A collection of Odontomachus heads (center) and other bug parts found in an F. archboldi nest. (Credit: Adrian Smith)

In his research, Smith found no suggestion that having a matching hydrocarbon profile correlated with behavior in either the skull-collectors or the trap-jaws. He used both matched and mismatched profiles in his experiments and reported no differences in how the ants interacted. He did not rule out, however, the possibility that differences were too subtle to be picked up in the experiments as designed.

Smith does believe that the interspecies hydrocarbon profile similarities, and population-specific variation, points to Formica archboldi and Odontomachus co-existing for a long period, and some selective advantage for F. archboldi to evolve that unusual trait. It’s possible, he notes, that parasitism plays a role, but not in the way you might think.

Another ant, Polyergus oligergus, is a social parasite of F. archboldi, and Smith thinks that the skull-collectors may have evolved Odontomachus-mimicry to “chemically camouflage” themselves from their own pesky parasite. Confirming that notion would require significantly more research into how all three ants interact, however, and was far beyond the scope of the current study.