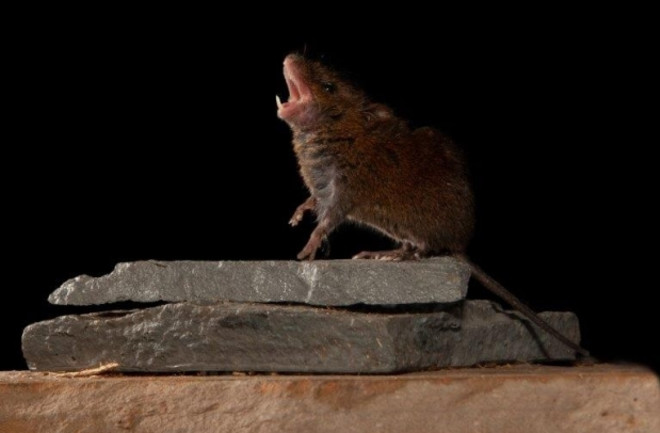 High in the cloud forests of Costa Rica, a distinct chirping sound ripples across the landscape. This high-pitched staccato refrain trills not from birds, but mice. Now researchers have found that the tiny rodents making these sounds, known as Alston’s singing mice, take turns belting out their tunes much in the same way people take turns when they talk to each other. The discovery could shed light on communication problems in human speech.

Some 10 percent of the Americans suffer from a communication disorder. Those can stem from developmental disorders like autism, or stroke-related language deficits, for example.“Disorders related to this [turn taking] process can be really devastating,” said Michael Long, a neuroscientist at the NYU School of Medicine, who led the new research. “Everything from developmental disorders like autism to stroke-related language deficits can affect this process.”

To get to the root of communication disorders in the brain, the scientists set out to find an animal that mimicked the vocal behaviors of humans. Long found it in Alston’s singing mice thanks to the keen observation of a graduate student working in his laboratory. Initially,  researchers were studying the mice to figure out how the brain enables animals to produce song. Then, the graduate student noticed how the mice chattered to each other when the animals’ cages were close. The rodents appeared to be carrying on conversations. That casual observation hooked Arkarup Banerjee, a research fellow in Long’s laboratory, when he came to interview for a job. “I was completely enthralled,” he said.

Banerjee spent the next few years recording the mice’s songs. “All we needed was two microphones,” Banerjee explained. “It’s basically the glory of the animals that they do this robust behavior. We can just simply measure them using microphones.”

Banerjee’s recordings revealed that the mice are extremely polite. They don’t talk over each other, the researchers found. Instead, the mice wait until their neighbor concludes before starting up their own call. Only about half a second passes between the animals’ vocalizations.

To understand how the mice take turns singing to each other, the researchers stimulated the mice’s brains with small currents to find the brain area responsible. They found a region near the front the brain they dubbed the orofacial motor cortex. When the researchers temporarily shut down this brain area with a drug, the mice still sang, but they no longer took turns, the researchers reported Thursday in the journal Science.

The finding means, “The animals divide the load,” Long said. Whereas the orofacial motor cortex controls when and how fast the mice sing, another region is responsible for producing the song itself.

“If you think about [singing] with a partner, you have to do two things: there’s the actual performance of the song, then there’s being able to coordinate that with a partner,” he explained. “What these mice do is actually relegate those two jobs to two different brain areas.”

The discovery, and the mice, will enable scientists to pinpoint the causes of human communication disorders and potentially find new therapies, the researchers say.