These Robots Are Ready for Liftoff

Liftoff of the space shuttle Discovery--the next-to-last NASA shuttle launch ever--has been delayed until at least Thursday (November 4). But one of the shuttle's postponed passengers to the International Space Station claims to feel no anxiety about the upcoming trip: 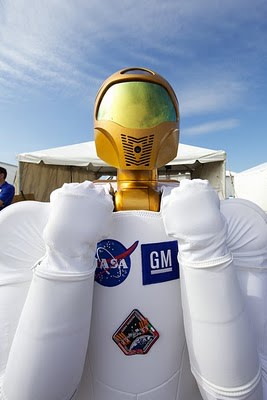 I'm not nervous--with my stomach full of brains, there's no room for butterflies.

That's from the Twitter feed of Robonaut 2, also called R2. No relation to R2D2, except that both are cute and helpful space-bots.

Once R2 makes it to the space station, it will take up permanent residence there. But it's not like robots will suddenly be running the place. R2 doesn't have much of a mind of its own, for one thing. It only carries out orders from human-nauts. And for now, it's a prototype. On the space station, humans will learn how R2 functions without gravity, and how well its extra-dextrous hands perform various functions. 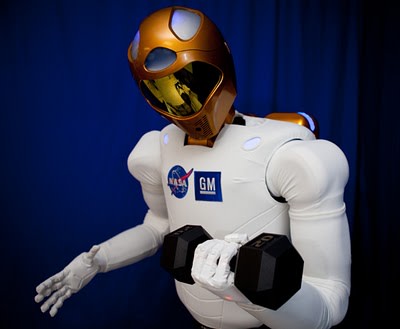 Eventually, robonauts will use those hands, which NASA describes as "approaching human dexterity," to take over dangerous or boring tasks from human astronauts. R2 is already able to change an air filter, a trick which might get old fast. ("Mikhail! Stop playing with that robot; I told you the air filter is clean already!")

R2 is legless for now. It will stand on a fixed pedestal on the space station. But future generation might have legs--or even wheels. The "Centaur," currently being tested on land, is a robonaut torso attached to a four-wheeled rover.

Robonaut 2's dextrous and human-like hands are the pride of NASA, but other scientists have been working on a whole new model. Led by Eric Brown at the University of Chicago, a team created a "universal robotic gripper" that forgoes fingers altogether. Instead of bothering with all those complicated joints, the robotic gripper is just a round rubber sack filled with a granular material. When the sack comes in contact with an object, the grains flow around the shape (think of setting a small bag of rice on top of a pen). Then a vacuum quickly sucks a tiny bit of extra air out of the gripper. This changes the sack's volume by less than 1%, but it's enough to mold it around the object and grip it tight.

Here, you can (and should) watch a video of the robotic gripper pouring a glass of water and drawing with a pen. The gripper can pick up most sturdy objects, but still has trouble with porous or squishy things, such as cotton balls.

Brown says that amputees could one day benefit from prosthetic hands based on this technology. I have a hard time imagining that people would want their missing hands replaced by grippy blobs, but maybe I'm wrong. Either way, there are certainly plenty of robots that could use good hand technology. I wonder if the universal gripper works in microgravity...