From gargantuan ears to concentrated pee, animals have evolved in unique ways to cool off, preserve water and find habitat in arid environments. 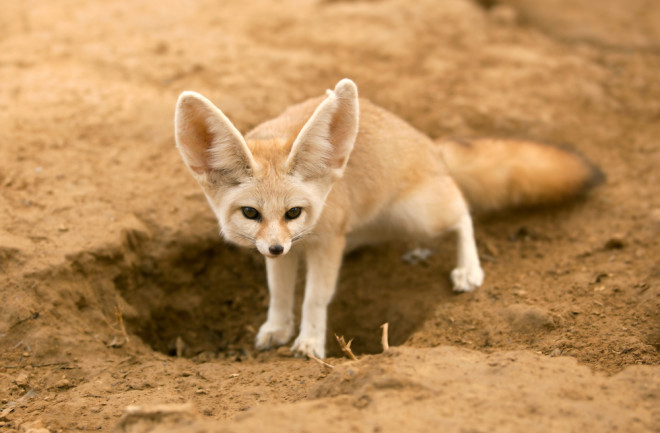 It’s been reported that former Duke basketball star Paolo Banchero, the first overall pick of the 2022 NBA draft, loses up to seven pounds of sweat each basketball game.

Like Banchero, warm-blooded animals cool off by evaporating water, either by sweating or panting. Under normal circumstances, animals have water in their bodies to spare. But in the desert, it’s a hot commodity, creating a catch-22 for organisms: risk overheating or risk dehydration.

One Problem, Many Solutions

Desert animals have innovated cooling strategies that don’t require water loss. One common solution is to grow large ears like fennec foxes or long-eared jerboas. Their expansive lobes can shed heat to the environment using blood vessels that act as thermostats. In jackrabbits, for example, when the air is slightly cooler than body temperature, these blood vessels dilate, shuttling warm blood to the body’s periphery to release heat to the environment.

Other desert animals reabsorb fluid from their pee. Humans can also do this to some extent, says Joana Rocha, an evolutionary biologist at the University of California, Berkeley. “If you don’t drink water for a long time, your urine becomes darker.”

Desert animals take this to an extreme. The spinifex hopping mouse’s record-holding pee reaches concentrations over 9,000 milliosmoles per kilogram of water — that’s 10 times greater than what’s typical for humans. “Urine concentration has independently evolved in mammals that are very different,” Rocha says. “The more arid [the environment], the more you find species that can concentrate urine.”

These physiological adaptations are great, but other animals take a simpler approach: to avoid heat in the first place. Small mammals, for example, burrow to escape extreme temperature fluctuations. Birds can co-opt these burrows too, Riddell says. But dodging the heat isn’t free. When animals are cooped up, they can’t eat, defend territory and sometimes, they even forego breeding.

For aquatic animals like fishes and amphibians, droughts also cause habitat shortages. That’s the case for spadefoot toads, say David and Karin Pfennig, two married evolutionary biologists at the University of North Carolina at Chapel Hill.

Arizona and New Mexico are home to three species of spadefoot toads (which, despite their name, are actually frogs). The habitat is arid, but the creatures need standing water to lay eggs.

Most of the year when water isn’t available, they burrow into the sand, sometimes over 3-feet deep, and lie dormant with a slowed metabolism until a rainstorm strikes. Typically, each July, monsoons fill pools called ephemeral ponds. The downpour is an alarm bell of sorts for spadefoots, who emerge, rush to the ponds, and breed that night.

Laying eggs is only half the story. Tadpoles also have to survive to adulthood. That’s a challenge because ephemeral ponds can dry up within a week. Most frog species take weeks if not months to develop from aquatic eggs into terrestrial metamorphs. Some spadefoot species, however, transition in a period as short as eight days. “That might be the fastest developing vertebrate,” Pfennig says.

But not all species are so lucky. One species, the plains spadefoot, thrives in wetter grasslands and have slow development. In dryer regions of their range, their offspring don’t have the luxury of time. When water levels are low, plains spadefoot females use a strange strategy to set their kids up for success: to hybridize with their faster-developing relatives, the Mexican spadefoots. The hybrid offspring develop quickly, and plains spadefoot females even tune into male calls to choose the partners that would sire the most rapidly developing tadpoles.

“The [male hybrids] are sterile and the females only have part of the number of eggs that they might produce if they had been purebred,” says Karin Pfennig. “But it's better to have offspring that survive and may not be the best than to have all of your tadpoles die.”

The tadpoles have a few more tricks up their sleeves, too. They develop lungs early to breathe if their pond dries out. And over evolutionary time, they’ve jettisoned repetitive chunks of DNA to streamline growth and development. But perhaps their most impressive adaptation is that tadpoles can shape-shift between two distinct morphs: a humble omnivore and a menacing carnivore. The meat-eating morphs develop gaping jaws to cannibalize other tadpoles, and their ravenous lifestyle truncates time to metamorphosis by a week.

“Cannibalism occurs in the natural world when animals are faced with severe circumstances — [like] when food is scarce and they have to grow fast,” David Pfennig says.

For a tadpole facing desiccation, it’s literally a frog-eat-frog world.

The pressure to find water and stay cool is intensifying with climate change. It’s counterintuitive, but desert animals — despite being adapted to extreme conditions — could be most at-risk.

Karin Pfennig says that climate change is speeding up songs of male Mexican spadefoots. “Males with faster calls are more likely to produce tadpoles that become carnivores,” she says. In a drying and warming world, fast-developing meat-eaters and the allegro-singing fathers that sire them might have an edge.

Climate change is a challenge for thermoregulation, too. And it’s already decimated desert birds. The Mojave Desert, for instance, has lost 43 percent of its breeding bird species in the last century. “In Death Valley, people have seen birds fall out of the sky,” Riddell says.  “The truth is that these birds are already living at the limits of what they can tolerate. Instead of adapting to stay in the deserts, they’re just leaving or they’re dying.”

Birds might be a bellwether for other species to come. For example, at current temperatures, burrowing nocturnal mammals seem more resilient to climate change. But that doesn’t mean they won’t share the same fate in time, Riddell says. “There are no canaries in the desert, but [desert birds] are ringing an alarm bell that environmental conditions are getting too extreme for life.”