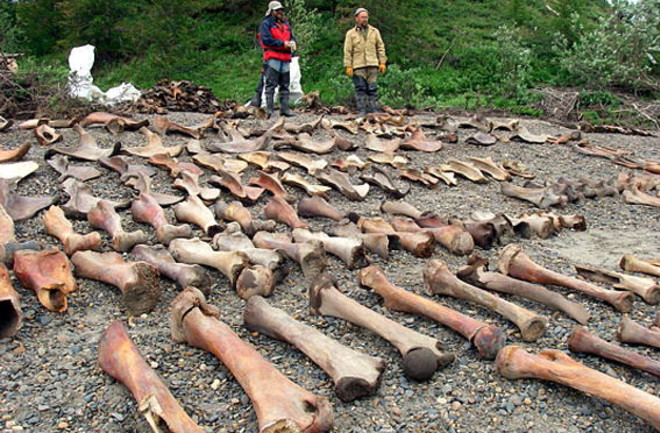 The Arctic Circle — during the Ice Age — may not seem like a suitable place for human habitation.

And until recently, archaeologists would have agreed: Many thought the far north remained unpopulated until after the last glacial period began to wane, some 18,000 years ago.

But archaeological discoveries in Siberia, made in the last two decades, have overturned this view. Sites frozen in the banks of Russia’s Yana River reveal that a sophisticated culture lived north of the Arctic Circle 30,000 years ago.

We’re just beginning to learn who these northern pioneers were, and how they adapted to life on frozen lands.

Rhino Horn on the Yana River

Arctic Eurasia is vast and sparsely inhabited today — making archaeological exploration of the region logistically challenging. Consequently, at the start of the 21st century, our understanding of polar prehistory was lean.

The oldest known site north of the Arctic Circle was dated to about 13,000 years ago, suggesting humans didn’t venture far pole-ward until the Ice Age abated.

But there was a glaring reason to think otherwise: It was known that by at least 14,000 years ago, people had spread from northeast Siberia through Alaska and into the Americas. Whether they traveled by land or sea, these migrants must have faced freezing conditions along the way. Presumably, they came from a culture accustomed to extreme cold and high latitudes. Yet, no archaeological evidence for Ice Age Siberians had been found.

The situation changed when a Russian geologist, searching for animal fossils, came across a foreshaft (the detachable end of a spear) crafted from a wooly rhinoceros horn. At 70 degrees latitude, the site was well north of the Arctic Circle, along the Yana River about 60 miles from its outlet to the Arctic Ocean. The artifact was almost certainly ancient, considering wooly rhinos were Ice Age creatures, now extinct.

In 2001, excavations began at this Yana “Rhinoceros Horn Site” (RHS), led by archaeologist Vladimir Pitulko of the Institute for the History of Material Culture in St. Petersburg, Russia. Over the next two summers, the team unearthed hoards of stone tools, animal bones and artifacts carved from mammoth ivory. Because the finds were buried under about 30 feet of frozen ground, perishable remains were exceptionally well preserved.

But the most exciting results from these initial digs were radiocarbon dates published in a 2004 Nature paper: The Yana RHS site was roughly 30,000 years old, which more than doubled the age for humans in the Arctic Circle.

Several older Arctic Circle sites have been reported, dating between 40,000 to 45,000 years old. Two of the sites only contained animal remains (no human-made tools), but some of the bones exhibited wounds or cutmarks. According to the excavators, these injuries were inflicted by human weapons — meaning people were in the Arctic at this time (though other scientists disagree). Farther west, the roughly 40,000-year-old Mamontovaya Kurya site, yielded 123 mammal bones as well as seven stone tools.

Together, these sites form a strong case that humans entered the high north more than 10 millennia before the Yana occupations. But, with only seven artifacts and animal parts, the earlier sites can’t tell us much about the ancient people who once lived there.

The Yana finds, in contrast, provide a rich record of life in the Ice Age Arctic.

Since the initial discovery, Pitulko and colleagues have excavated several locations around a bend in the Yana River where the rhino foreshaft was found. Three of the dig spots seem to have been campsites — where the ancient foragers set up home for some length of time. From these areas, the team unearthed about 2,500 bone and ivory items including weapons, sewing needles and bowls decorated with notches. They also recovered about 6,000 beads made of minerals, mammoth ivory and animal teeth. It’s clear the Yana people were skilled artisans.

The Yana folks were capable and strategic hunters who regularly ate bison, horse and reindeer, and who also targeted different prey for raw materials. For example, researchers found many complete hare skeletons, suggesting the animals were snared and skinned, providing fur for clothing.

Mammoth, too, were killed for materials rather than meat, according to a 2013 Journal of Archaeological Science paper. On the Arctic tundra, wood was surely scarce. So the Yana people instead used mammoth ivory to make weapons, utensils and more.

About 150 feet upstream from the residential areas, the archaeologists found remains from at least 31 mammoths, dating to about 30,000 years ago — the same age as the human occupations. There were puncture wounds and spear points embedded in some of the bones, making it clear people took down these creatures.

Despite this bounty of felled megafauna, at the campsites downstream, mammoth bones were rare. Of the 85,000 mammal scraps recovered, only about 3 percent were mammoth — mainly tusks carved into tools as well as five stylohyoideum bones, which are part of the tongue. The researchers hypothesize that Yana people sporadically killed mammoth for ivory, and ate the tongue, perhaps as a delicacy. The rest of the mammoth meat was probably too tough to be appetizing.

But were the Yana people that elusive group archaeologists have long sought: the hardy Siberian culture that went on to settle the Americas?

Not really, but kind of. It’s complicated.

That’s the takeaway of a 2019 genomic analysis of two baby teeth recovered from Yana.

The teeth came from two boys who belonged to a previously unknown population, now called the Ancient North Siberians. These people were not direct ancestors of the earliest Americans.

But, a small amount of Ancient North Siberian ancestry did make it into the Native American gene pool. Millennia after the Yana boys, descendants of the Ancient North Siberians intermingled with East Asian-related peoples — and this population likely gave rise to the group that first migrated to the Americas.

The direct ancestors of the earliest Americans have yet to be discovered — somewhere out there in Siberia.