A study suggests that the armored ankylosaurs brandished their tails during fights for dominance. 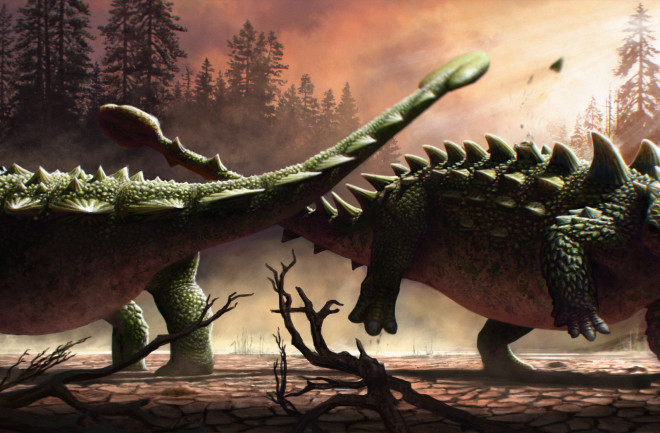 The ankylosaurs were armored dinosaurs with large, bludgeon-like tails. And experts didn't know what the ankylosaurs used these bulky tails for until a recent analysis in Biology Letters.

Assessing a rare ankylosaur skeleton with injuries all along its sides, the authors of this analysis assert that the 76-million-year-old specimen looked like it was struck by the tail of another ankylosaur while alive, probably during a battle for social or territorial dominance.

“I’ve been interested in how ankylosaurs used their tail clubs for years, and this is a really exciting new piece of the puzzle,” says Victoria Arbour, a study author and paleontologist at the Royal BC Museum, as well as an initial supporter of the alternative tail theory, according to a press release.

Though they varied from species to species, scientists say that many ankylosaurs shared several anatomical traits, including their armor and bulky tails. These tails, in particular, tended to be solid and strong and sheathed in bumpy, bony protuberances, which allowed the dinosaur to wield the appendages as a sort of weapon.

Some specialists say that the ankylosaurs developed this weaponry to protect themselves against predators, such as the Tyrannosaurus rex, while some support an alternative theory. In addition to battling predators, they say, the armored dinosaurs also implemented their tails to fight off fellow ankylosaurs — an application that they see as a significant driver of the tails’ initial development.

While all sorts of animals acquire this sort of specialized anatomy to settle their social and territorial disputes, including several species of antlered deer, the scarcity of ankylosaur skeletons makes it difficult to determine the truth of the theory. That is, until now, since the assessment of an ankylosaur specimen from the Zuul crurivastator species has provided an unprecedented peek into the purpose and function of these armored dinosaurs’ tails.

Revealing a series of injuries potentially produced by a blow from the tail of another ankylosaur, the analysis of the Z. crurivastator specimen suggests that the armored dinosaurs brawled against one another, possibly to put their social and territorial disagreements to bed.

The Truth About Tail Weaponry

The Z. crurivastator skeleton which was studied is one of the best preserved ankylosaur specimens in the world. Found in northern Montana nearly a decade ago, scientists worked tirelessly to withdraw the skeleton from the sediment. Once fully freed, they were delighted to discover that much the armor and the skin of the dinosaur’s body remained intact.

Read more: Dinosaur "Mummies" Exist And Here’s How They're Made

Analysis of the specimen showed that the dinosaur was covered in an assortment of pointed plates, which, in combination, composed its armor. The same analysis also revealed that the spikes on both sides of the specimen’s body were without their sharp tips, displaying shorter, stubbier protrusions, instead. These protrusions, scientists say, suggest that the spikes along the specimen’s sides were broken and subsequently mended while the dinosaur was still alive.

According to the scientists, the pattern and the placement of the injuries on the sides of the body indicate that they were sustained in a scuffle involving another ankylosaur and its tail, rather than a predatory attack.

“The fact that the skin and armor are preserved in place is like a snapshot of how Zuul looked when it was alive,” concludes David Evans, another study author and paleontologist at the Royal BC Museum, according to a press release. “The injuries Zuul sustained during its lifetime tell us about how it may have behaved and interacted with other animals in its ancient environment.”