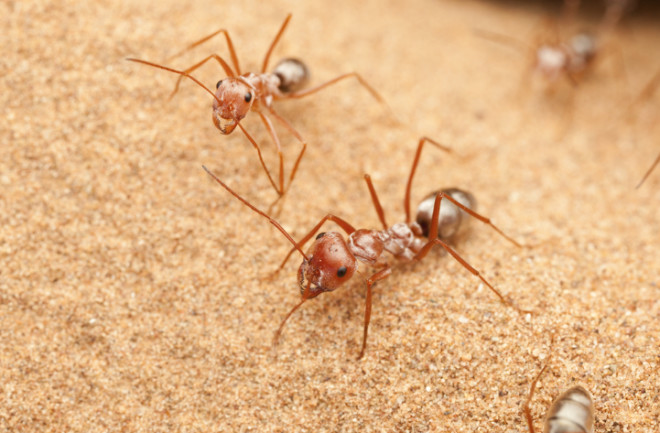 Around noon each day in the Sahara Desert, silver ants emerge from their underground nests. Despite this being the hottest part of the day, they come out to scavenge dead insects, which are most likely to drop dead when sand temperatures can reach 140 degrees Fahrenheit (60 degrees Celsius). The ants have to be quick, though. Their prey is scarce, and they have lots of desert to search.

Just how quick these iridescent arthropods can be, and how they achieve those speeds, is explained for the first time today in the Journal of Experimental Biology. Saharan silver ants can travel at 108 body lengths a second, the researchers found. This makes them one of the fastest known running species, bested only by the California coastal mite and the Australian tiger beetle.

Researchers have known for years that these ants are speedy, says Harald Wolf, who studies arthropod neurobiology at Ulm University in Germany and who coauthored the paper. His research team decided to see how the ants scuttle so fast.

The researchers built sandy-bottomed half pipes for the ants to run through in both the desert and lab conditions. Video cameras mounted above tracked how they moved. Comparisons between each video frame showed the researchers where the feet landed and let them calculate how fast each step was, while measurements of dissected limbs and torsos revealed how large the ants’ steps were compared to the rest of their body.

In human terms, the silver ants’ speed is staggering. An average human moving 108 body lengths every second would cover about 600 feet each second, which works out to around a 9-second mile. (This comparison is a bit contrived, of course, because humans are bipedal and, even if crawling, we’d move differently. But still.)

Wolf and his team saw the silver ants move so fast in part because they gallop, with all six legs leaving the sand at some points. While other insects get airtime, the silver ants also move their limbs extraordinarily quickly.

The Stride is the Secret

“The stride is real special,” says Wolf. They recorded the ants making up to 47 strides a second. For comparison, the world’s smallest hummingbird moves its wings about 80 times a second. These fast gallops explain why the silver ant moves faster than a closely related species, which has longer legs relative to its body, and so must take fewer steps per second.

The ants also move their six legs in tripod formations, with the front foot on one side moving in synchrony with the back two legs on the other side. Other insects also move their feet in trios, but the silver ants use this strategy even when moving at slower speeds, says Wolf. The research team suspects this step pattern helps distribute weight and prevents the ants from sinking into the sand.

Wolf and his team plan to investigate that theory later, possibly after they spend more time studying how silver ants use the sun to navigate. These desert ants’ speedy journeys and dedication to the task makes observing them fascinating, Wolf says.