These Birds Learn to Recognize Humans They Hate 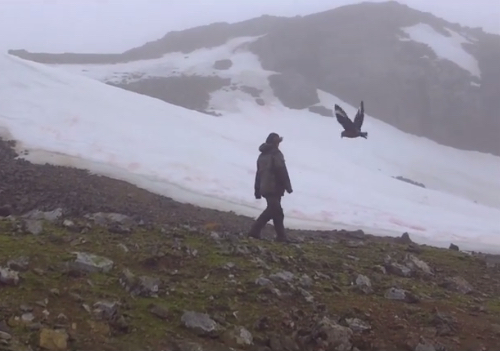 Antarctic seabirds called skuas are so clever that they can recognize individual humans after seeing them only a few times. Some Korean researchers discovered this by messing with the birds' nests and then waiting to get attacked. They're either very brave or have never watched The Birds. The study took place on Antarctica's King George Island. The animals here didn't evolve around humans. People have only been making appearances on the island since the 1950s or so. Today 10 countries have research stations on the island. Korea Polar Research Institute scientist Won Young Lee and his coauthors study brown skuas here, which are like big, dark-colored gulls. In the winter of 2014–2015, researchers visited skua nests once a week to check on their eggs and chicks. They suspected that the birds could recognize them, and were unhappy about humans poking at their nests. (If a skua wants you to go away, it will give not-so-subtle hints like attacking your head.) So the researchers set up an experiment. Starting in the fourth week of their study, two researchers visited each nest at a time. One of them, the "intruder," had checked on the nest in previous weeks. The other, "neutral" researcher had never been to the nest before. As they approached the nest, the researchers recorded how close they could get before the birds attacked. Then they split up and walked in opposite directions, observing which person the birds chased after.

During tests, a "neutral human" and a "nest intruder" wore identical clothes. But the skuas weren't fooled. As the weeks went on, skuas attacked from greater distances. But they didn't attack just anybody. All seven of the nesting pairs directed their attacks at the known intruder. The birds "reacted very aggressively" after five visits, the authors write, including kicking intruders in the head. They ignored the neutral humans. Even though the researcher pairs wore identical clothing for their experiments, the skuas had no trouble spotting people who had fiddled with their nests in the past. The researchers don't think the birds were using smell to tell them apart, since the site is windy. More likely, the birds relied on human facial features and body postures. This is especially impressive since the birds evolved without ever seeing a human. There's no reason they should have a natural ability to recognize us. Two other local bird species, sheathbills and Antarctic terns, don't seem to discriminate between people. The scientists chalk it up to "high cognitive abilities" on the part of brown skuas. In other words, they may just be especially smart. This makes sense; the birds are predators that have to be flexible to find their prey. Brown skuas have been seen chasing other large birds and taking their food. They'll even steal drops of breast milk from nursing elephant seals. This is a bird you don't want to cross—and after you do, you might want to wear a mask. https://www.youtube.com/watch?v=5INsdKej0ow&feature=youtu.be Images: Lee et al.