These Adorable Rodents Are Democratic Snugglers 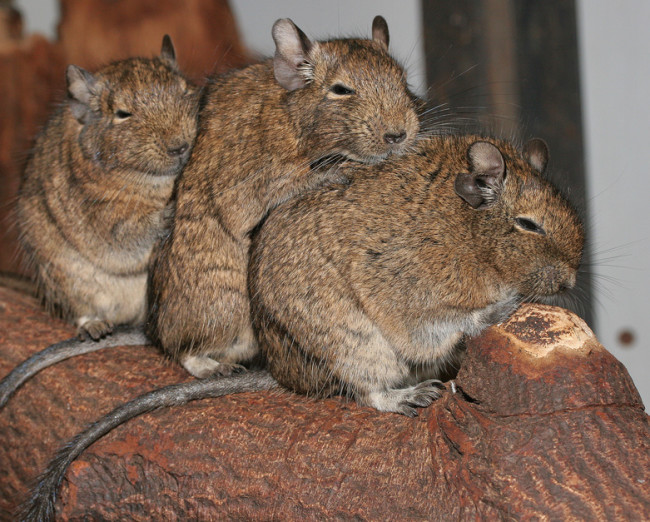 If you're a small animal in a cold environment, being standoffish is a bad survival strategy. That's why animals of many kinds huddle for warmth. They put their furred or feathered bodies right up against their neighbors' and conserve energy that they would otherwise spend heating themselves. One especially adorable huddler is the degu (Octodon degus), a rodent that lives in Chile and has a tail like a paintbrush. As temperatures drop, degus clump into cuddling groups to keep warm. A new study finds that degu huddles have no leaders: the animals are perfectly self-organized. In fact, they're so self-organized that they resemble water crystallizing into ice. Mauricio Canals, a doctor and ecologist at the University of Chile, takes snuggling rodents very seriously. He's authored several papers on the huddling behaviors of small mammals. Most recently, he and his coauthors captured 13 wild degus and brought them back to the lab to find out their secrets. The researchers put all 13 rodents into a chamber together and gradually adjusted the thermostat while observing the animals' behavior. As the chamber warmed or cooled and the rodents milled around, the scientists used video recordings to measure how far apart the animals were. They recorded all the huddles that occurred and how many individuals they contained. The scientists had marked each degu's back so that they could identify the individuals. This let them see whether certain degus tended to lead huddles (or to be left out of them). And they did two sets of trials, one in the spring and one in the fall. This way they could tell whether the animals learned certain behaviors in one season and repeated them in the next. As the temperature dropped, degus were more likely to huddle. But there was absolutely no pattern to how they did it. This was "a behavior triggered spontaneously," Canals writes, "without any order, hierarchy, or recipes." No animal was more or less likely to join a huddle than any other. In this way, the authors write, the degu is similar to the emperor penguin. Shuffling masses of emperor penguins take shape without any leadership. Yet some other animals have been found to rely on leaders or hierarchies when they form huddles or swarms, such as pigeons. Degus seem to be completely self-organizing. Canals describes their huddling as a "phase transition," like water freezing into ice. Just as water molecules lock together when the temperature drops, the little rodents find cuddle buddies without anyone telling them to do so. A degu is actually less like a water molecule than a mouse is. In earlier research, Canals found that mice make a sudden transition to huddling when the temperature drops past a certain point. But mice are less eager huddlers to begin with. Degus, being extremely social, like to stay near each other all the time. They creep closer and closer as the temperature falls, eventually transitioning to huddling. (Also unlike ice crystals, which have a rigid molecular structure, degu huddles can be any shape.) Huddling helps animals like the degu save energy and stay alive. And degus have evolved to do it spontaneously and efficiently, without waiting for a leader. They may act like ice, but inside the group they're warm and toasty.