Researchers looking at the 2012-13 eruption from Russia’s Tolbachik found tiny diamonds, but where are they from? 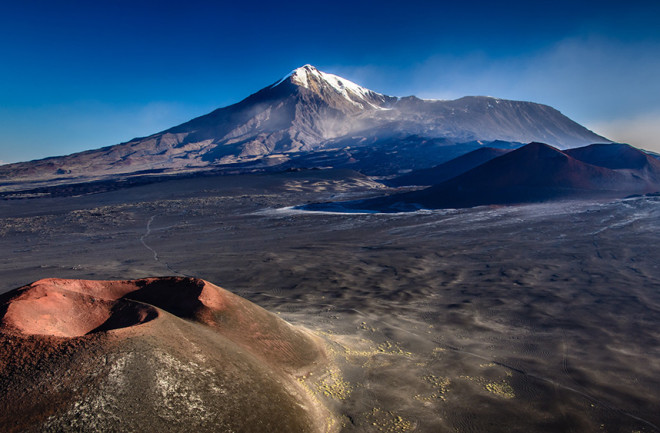 Tolbachik in Russia, with the cones from the 2012-13 eruption in the middle foreground. (Credit: kuhnmi/Flickr)

Diamonds are remarkable. Most form deep within Earth, 62 miles or more beneath our feet and are brought to the surface in powerful explosive eruptions. Yet researchers looking at the 2012-13 eruption of Tolbachik on the Kamchatka Peninsula in Russia found tiny diamonds in the volcanic debris. This was not one of those powerful explosions but a massive series of lava flows. So why were there diamonds showing up unexpectedly?

Diamonds from the Deep

The “easiest” way to form diamonds is taking carbon and exposing it to the immense pressure within Earth’s mantle. Then they get coughed up with other chunks of rock from the mantle in these giant explosive eruptions called kimberlites. They’re named after one of the world’s most famous and productive diamond mines in Kimberley, South Africa. The places where we find most diamonds today are from the rocks created by these eruptions, found in places like northern Canada and Arkansas. Sometimes, glaciers or rivers have moved the diamonds from their sources, but they can be traced back to their original volcano sources.

So, what are diamonds doing in Kamchatka? The easternmost peninsula in Russia is a subduction zone, where the Pacific plate is sliding under Eurasia. There is a string of active volcanoes starting in Japan and running north into Kamchatka. In Russia, these include highly active volcanoes like Sheveluch, Klyuchevskoi and Bezymianny. So, not really the types of places we would normally expect to find those eruptions that bring diamonds up from the mantle.

Yet, Erik Galimov and his colleagues found just that at Tolbachik. This Russian volcano produced one of the largest lava flow eruptions of the 21st century (so far), dumping over 1/10 of a cubic mile of lava. There were some explosions as part of the eruption, producing lava fountains that reached hundreds of meters upwards.

A view of the 2012-13 eruption at Tolbachik in Russia from NASA’s EO-1. (Credit: NASA Earth Observatory)

From Russia, With Carbon

A recent paper by Galimov and others in American Mineralogist details the tiny diamonds they found in lavas from Tolbachik. These crystals are less an a 0.03 inches and mostly found in the rocks made during the lava fountain phase of the eruption. So, how did these mysterious diamonds form?

Normally, diamonds would be part of a foreign rock brought up in a kimberlite eruption. Geologists call these xenoliths, and the diamonds themselves are xenocrysts. They aren’t really related to the magma erupting, but they came along for the ride. However, these Tolbachik diamonds don’t seem to be from xenoliths because there isn’t much other evidence for these chunks of foreign debris in 2012-13 lava.

However, there was one more potential source for these diamonds: people! Could the microdiamonds actually just be contamination from drilling or the sampling instruments themselves? Most diamonds used in industry are synthetic and would have a specific nitrogen isotopic composition. Galimov and others looked at the nitrogen isotope composition of the Tolbachik diamonds and, sure enough, they weren’t synthetic. These diamonds formed naturally from the volcanic gases being released from the lava. [Author's note: I've had a brief discussion with Dr. Ryan Ickert (Purdue University) and it seems like it might not be as simple at the paper portrays. It doesn't change the idea that these diamonds are likely crystallized from the volcanic gases at Tolbachik, but the isotope argument might be messier.]

This type of crystallization, directly from a gas, isn’t a new observation. In some rhyolite eruptions, the hot gases that get released after a massive explosive eruption form minerals like topaz. These diamonds at Tolbachik likely formed the same way, where hot volcanic gases laden in carbon dioxide and other elements cooled in bubbles and rapidly crystallized minerals like diamonds.

Now, don’t rush out to Kamchatka. You’re not going to get rich from these tiny diamonds from Tolbachik. However, these little crystals show just how bizarre volcanic activity can be, where diamonds can form directly from a gas, high pressure not needed.