Keibul Lamjao’s unique floating ecosystem is unlike any place on the planet, but a barrage built to harness hydroelectric power is endangering the floating park's future. 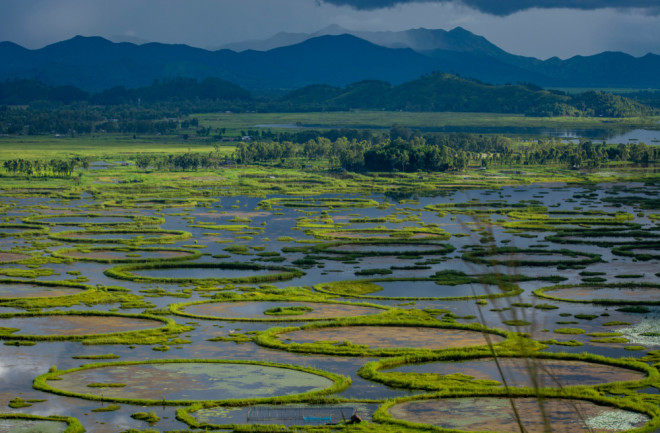 Keibul Lamjao National Park is a natural wonder on many accounts. For starters, the park lies in the largest freshwater lake in northeast India, Loktak Lake, with a surrounding backdrop of low, gentle, green-tinged hills.

It's difficult to get more specific about the park’s location because its component parts don’t stick to one place — instead, they float. For that reason, Keibul Lamjao bills itself as the only floating national park in the world.

But the rich, biodiverse wetlands that comprise the park are in peril, impacting both the region's one-of-a-kind ecosystem and the wildlife that inhabit it.

The park consists of a unique series of islands made from decomposing vegetation, soil and living plants called phumdi, found only in Loktak Lake and nowhere else in the world. These floating patches of soil and vegetation can encompass anywhere from a few inches to 6.5 feet, and mostly grow in the lake's southeastern portion. That's where many of them have joined together to form a giant phumdi — essentially, a massive floating meadow.

Some phumdi are shaped by humans, who use ropes and bamboo to form them into circles used for fish farming. These locals live in small huts on these islands, getting around the area by boat.

Traditionally, phumdis only actually floated during the monsoon season when the water was high. During dry season, the patches of vegetation rest on the lakebed where they absorb nutrients from the soil below.

“All together, phumdi play an important role in the ecological processes and functions of the lake ecosystem,” reads the submission made to list Keibul Lamjao as a United Nations Educational, Scientific and Cultural Organization (UNESCO) World Heritage Site. “They provide a biological sink to the key nutrients and govern the water and nutrient dynamics of the lake.”

Keibul Lamjao provides important habitat for a number of species. Perhaps the best known is the sangai, a subspecies of Eld’s deer, considered endangered by the International Union for Conservation of Nature. Sangai are endemic to the state of Manipur, and were once believed extinct, according to a documentary on the effort to conserve the species.

These deer depend on the phumdi's unique ecosystem. They have adapted to moving on the floating land, and feed on the plants that grow there. Taken together, this entire subspecies likely only numbers in the hundreds.

Other species of birds, butterflies and fish also live on — and under — the floating meadows. But many of these animals were affected by the ecological changes brought by the construction of the Ithai Barrage and hydropower station in the 1980s.

This barrage, built to impound water in Loktak Lake and harness its potential for hydropower generation, caused the lake's water levels to rise. As a result, these higher water levels didn't drop down enough in the dry season to let the phumdi rest on the lake bed, according to World Atlas — and some of the floating islands began to break apart.

“The operation of the hydropower plant in the lake has degraded the habitat and threatened the survival of wildlife in [Keibul Lampao],” environmental scientist R.S. Khoiyanbam wrote in a study published in 2021 in the International Journal of Lakes and Rivers. The barrage also blocked the pathway of aquatic species coming up from the Chindwin and Irrawaddy river systems downstream from the lake in Myanmar.

According to Khoiyanbam, the most glaring example of the lake's biodiversity loss is the disappearance of the migratory fishes that once inhabited its waters.

The hydropower plant didn't just impact the region's wildlife, but the livelihood of the people living around the lake, as well. When the plant's construction flooded the area, that meant that more people moved directly onto the lake, Khoiyanbam writes.

Within the park, these locals cultivate a number of aquatic plants , including a type of ginger, water celery and water spinach — plants more commonly eaten in parts of Asia. Others live off the fish farms built into phumdis. Many of these villages subsist almost entirely on the resources provided by the park, according to some research.

The loss of the phumdi has been fixed to some degree by pinning them down with poles, which in turn gather nutrients from the lakebed and stick to the larger contiguous floating meadow. The park has been submitted for listing as a UNESCO World Heritage Site to further safeguard its unique ecosystem.

But Khoiyanbam isn’t optimistic about the area's future. “Loktak lake is currently in a deep ecological crisis, and the water bodies are showing signs of near-total collapse,” he writes. “Unless remedial measures are taken straightaway, the whole ecosystem is headed for a major catastrophe.”