The Great Pyramid of Cholula: This little-known structure in central Mexico preserves 2,500 years of Mesoamerican history. 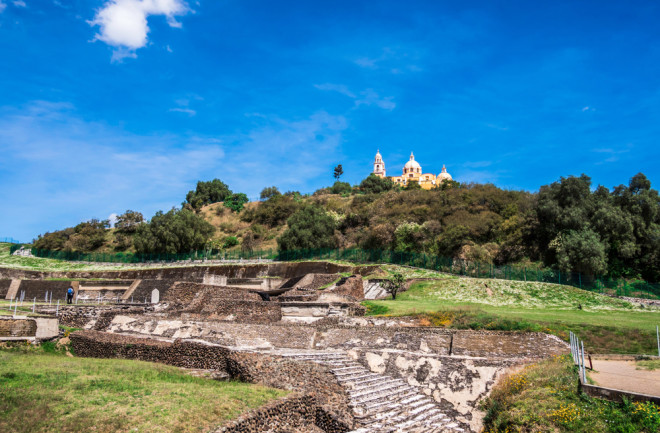 After conquistador Hernán Cortés and his men marched through Cholula, Mexico, in 1519, he described it as perhaps “the most beautiful city outside Spain.” Yet he never even saw Cholula’s preeminent feature. Or, to be more precise, he never recognized it.

At the city’s center, a massive hill rises above the flatlands. Despite its local name, Tlachihualtepetl (“man-made mountain”), Cortés seems to have thought it was a natural feature. So, as his soldiers slaughtered thousands of natives and systematically razed their ceremonial buildings, they missed one — the Great Pyramid of Cholula, hidden within the hill.

It’s easy to see how the Spaniards overlooked it. Built with mud-based adobe bricks, the structure was by then overgrown and resembled little more than a giant earthen mound. But its humble materials mask its grandeur: At roughly 1,300 feet wide and 215 feet high, it’s the largest pyramid in the world by volume — larger than Mexico’s more famous Pyramid of the Sun in Teotihuacán, and even the Pyramid of Giza in Egypt. Some argue it’s the largest monument of any kind, and it may also be the oldest continuously used structure in the Americas.

For an edifice with so many superlatives, “very few people know about it,” says Geoffrey McCafferty, an archaeologist who recently retired from the University of Calgary. The pyramid captures some 2,500 years of Mesoamerican history, a chronicle of the diverse civilizations that have modified its appearance and symbolic meaning over the years, up to the present day. “I describe it in my classes as the most important pyramid you’ve never heard of," McCafferty says.

The Chapters of Cholula

McCafferty first got to know the great pyramid in 1971, when he was studying in Cholula. One day, playing frisbee with his friends on a smaller, adjacent pyramid, he stumbled upon a hole filled with 20 obsidian blades. “I thought, ‘This is a site with amazing potential,’” he recalls.

Fifty years later, it still is. Much about the pyramid, including who began building it and why, remains ripe for speculation. Despite nearly a century of archaeological efforts, McCafferty has written, “the religious center of Cholula remains one of the great enigmas of ancient Mesoamerica.”

The first excavations actually date back to the turn of the 19th century, when the German explorer Alexander von Humboldt studied the site. He called Cholula’s centerpiece “the greatest, most ancient, and most celebrated of the whole of the pyramidal monuments” in Mexico. But serious investigations began only in the 1930s, when archaeologists first tunneled into the pyramid’s bowels. Incredibly, they found themselves traveling not deeper into a single structure, but through a series of pyramids, each with a facade of altars, platforms and staircases that had once formed the exterior. Four distinct phases of construction lie above each other in succession, like nesting dolls or an onion’s layers.

This layering indicates a far richer history, stretching from the third century B.C. to the ninth century A.D. The sloping, angular talud-tablero architecture of the oldest phase suggests a connection to Teotihuacán, about 60 miles to the northwest. But the next phase reflects a distinctly different style with staircases on all four sides, “almost as a rejection of Teotihuacán,” McCafferty says. In the third, the builders again adopted the design of their neighbors — who at that point were in decline — perhaps to usurp their sacred symbolism and assert themselves as the region’s new ceremonial hub.

Whoever these ancient architects were, they are recorded in legend only as a race of giants, called Quinametzin. The first certainty in the Cholula pyramid’s saga comes with the Olmeca-Xicalanca (not to be confused with the much older Olmec civilization), who supposedly conquered the Quinametzin around 800 A.D.

The pyramid’s original significance is unclear, but McCafferty believes its creators intended it to be an “axis mundi” — a cosmic nexus of the underworld, the Earth and the heavens. Sitting above a spring, it may have represented the Mesoamerican concept of the "altepetl" (literally translating to “water-mountain") or a metaphor for “kingdom.” Murals scattered throughout the interior depict visuals like serpents, jaguars, skulls and festivals, but without historical documents it’s difficult to glean much about their meaning.

In later years, McCafferty says, it served as a cemetery and a shrine to the rain god Chiconauquiahuitl. But John Pohl, an anthropologist at California State University, Los Angeles, suggests a different interpretation. Unlike the pyramid’s first three phases, the final one lacks a stone facade, leading him to conclude that the Olmeca-Xicalanca covered it with adobe to create an artificial mountain dedicated to the deities Xochiquetzal and Xochipilli. “It seems to have been venerated as a natural, park-like environment,” Pohl says. (It’s also possible, McCafferty notes, that the stone facade was simply stripped away for use elsewhere.)

Either way, around 1200 A.D., yet another ethnic group arrived. The Tolteca-Chichimeca shifted the city’s religious center to a new pyramid, which they dedicated to Quetzalcoatl, the name for both a feathered-serpent deity and a mythological culture hero. When Cortés showed up, Cholula primarily served as a site of worship for the cult of Quetzalcoatl, and the great pyramid had been mostly abandoned.

But then, in one of the story’s most remarkable twists, the Spanish unwittingly began a new chapter in the pyramid’s life: They built a Catholic church on its summit. Five hundred years later, La Iglesia de Nuestra Señora de Los Remedios still stands, capping a legacy of two-and-a-half millennia. “This is the only place we know of in Mesoamerica where this kind of permanent engagement with a particular place continues,” Pohl says, “even to the point where it’s considered one of the most holy places in the Catholic faith.”

In fact, McCafferty argues there is no great distinction between the pyramid’s use by pre-Columbian peoples, and its modern use — the Virgin of the Remedies, to whom the church is dedicated, shares attributes with more than one Mesoamerican goddess. “It’s a continuity, an evolution into a new variant,” he says. Perhaps in a few centuries, a new layer will overtake the church, preserving another moment in the great pyramid’s rich history.