The World Is Our Niche

Our unique adaptability may explain why we’re the last humans on Earth. 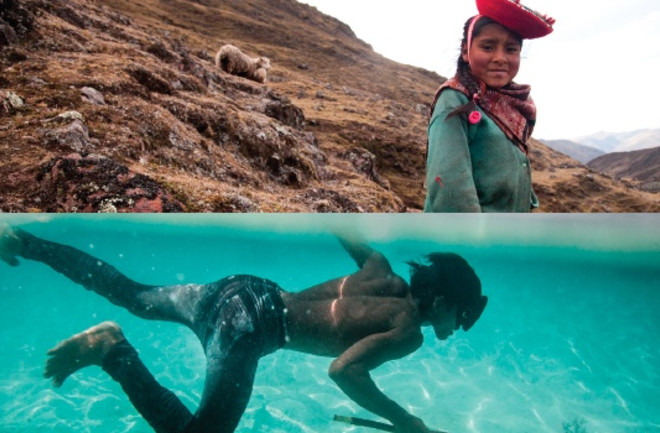 Humans have gone where no ape has gone before. Unlike our closest primate cousins, who are confined to the tropics, Homo sapiens inhabit all corners of the planet, including harsh deserts, oxygen-thin altitudes and Arctic lands.

“People just don’t seem to have a lot of constraints on where they could live,” says Brian Stewart, an archaeologist at the University of Michigan.

Which is odd, ecologically speaking. Most animals stick to particular habitats, related to where they fall on a continuum between generalist and specialist. Creatures like raccoons are textbook generalists, which inhabit varied environments and consume diverse foods. Specialists, such as koalas, have a limited range and diet.

Stewart says Homo sapiens may “uniquely have the ability to tack back and forth . . . along that continuum,” allowing them to live just about anywhere. This calls for an entirely new ecological classification — the generalist specialist — an idea he proposed with co-author Patrick Roberts in a 2018 Nature Human Behavior article. According to their hypothesis, as a species, modern humans are generalists, subsisting on a broad array of resources across the planet. At the same time, certain cultures have become specialists, biologically and culturally adapted to particular environments, including really tough ones.

“I haven’t seen any cases of other animals that can do that,” Stewart says. You won’t find Arctic species in the Sahara, or mountain creatures in marshland — except for Homo sapiens.

Stewart and Roberts believe this capacity to slide along the generalist-specialist scale was missing from other hominins, or species in the human family tree, such as Homo erectus. After evolving in Africa, this early ancestor began moving into Eurasia about 1.8 million years ago, but it appears to have stuck to landscapes similar to the grasslands and forests of Africa. While some of the sites are in hostile environments today, they were hospitable when early Homo came through, based on studies of ancient climate.

For example, stone tools and faunal remains found in the Nefud Desert of Saudi Arabia were likely deposited between 300,000 and 500,000 years ago by an unknown hominin predating Homo sapiens. Today, the site lies in barren desert, with scorching summer temperatures and less than half an inch of rainfall each year. However, the animal bones belonged to species that need reliable water, like elephants and aquatic birds. In 2018, researchers also measured elements preserved in the fossil teeth that reflect past aridity and vegetation conditions. Their conclusion: Long ago, the region was humid grassland, similar to present-day East Africa. The Nefud would have been a familiar environment for H. erectus and other archaic hominins.

As generalist-specialists, however, Homo sapiens have survived and thrived well beyond that ancestral habitat. Neanderthals and Denisovans — our extinct sister species — also branched out to colder climes and possibly higher elevations, but neither came close to matching the geographic breadth of our species. While versatility is a species-wide trait, countless culturally unique adaptations have allowed specific groups to conquer extreme environments.

The best-studied case is high elevation. Far above sea level, people face intense cold, aridity and ultraviolet rays. Food is limited, but most critically, so is breathable air. Compared with sea level, there is about 17 percent less oxygen available in Denver — and that’s merely the “Mile High City.” Around 1.5 miles up, with oxygen reduced about 27 percent, most people experience hypoxia, or insufficient oxygen, which can lead to shortness of breath, nausea and insomnia.

More than 80 million people worldwide reside above that 1.5-mile mark, however, including in cities such as Quito, Ecuador; Lhasa, Tibet; and La Paz, Bolivia. Even lowlanders can acclimate, eventually producing extra red blood cells, which contain hemoglobin, the protein responsible for transporting oxygen throughout the body. This quick fix ensures sufficient oxygen to the tissues but has long-term costs: It thickens the blood, which can lead to cardiovascular and pregnancy complications.

Some people, however, don’t experience either altitude sickness or the negative consequences of the body’s quick fix for it. Anthropologist Cynthia Beall has measured sea level-like hemoglobin values in hundreds of Tibetans living more than 2 miles high. “It’s almost as if they’re not at altitude,” says Beall, a professor at Case Western Reserve University.

Beall and others have shown that Tibetans, as well as highlanders of Ethiopia and the Andes, have adapted to elevation. Unlike the temporary acclimation lowlanders gain within weeks, these changes became fixed in their DNA over many generations.

In Tibetans, the changes involve at least two genes, EPAS1 and EGLN1, which suppress the body’s normal production of extra red blood cells in response to low oxygen. Recent research suggests the EPAS1 variant was inherited from another archaic hominin through interbreeding more than 45,000 years ago. However, other high-altitude groups show different, uniquely H. sapiens adaptations. While less studied, at least one Ethiopian ethnic group has, like Tibetans, a sea level-like amount of hemoglobin, but it’s influenced by a different gene. Andeans, meanwhile, have high hemoglobin levels like acclimated lowlanders, but seem to be protected from the consequences of thickened blood by genes related to cardiovascular development.

Many questions remain, though, including the most basic: How do Tibetans get enough oxygen without elevated levels of hemoglobin? “I wanted to have this all figured out by now, but I don’t,” says Beall.

Also unresolved: Who first settled high elevations and when? Indisputable fossils and artifacts from human ancestors between 700,000 and 1.5 million years old have been found at sites up to — but not exceeding — 1.49 miles, just below the hypoxia threshold. In 2018 in the Journal of Paleolithic Archaeology, researchers described stone tools found 1.8 miles above sea level on Mount Dendi in Ethiopia. Based on the artifact style, the authors claimed a species predating H. sapiens made the items. The site lacks dates, associated human fossils or other supporting evidence, however.

Even if earlier species ventured to highlands for short stays, there’s no indication they settled there permanently. For year-round occupation, “I think there’s a lot to be said for Homo sapiens being the only likely candidate,” says Mark Aldenderfer, an archaeologist at the University of California, Merced, and an expert on high-elevation sites.

To identify full-time occupation, archaeologists look for clues such as chemical signatures in bones that distinguish locals from migrants and the geographic provenance of raw materials. Such evidence suggests that, by at least 7,000 years ago, people permanently resided above 2 miles, in both Tibet and the Andes.

People of the Ice and Sea

Scientists also have begun investigating how people have evolved to live in other extreme conditions. The work requires comparing thousands of genomes, hunting for versions of genes that are common among people adapted to particular habitats but rare in other populations.

Among Arctic peoples, for example, Greenland Inuit and Northeast Siberians both have unique gene variants involved in fat metabolism, suggesting an adaptation for diets heavy on blubber-rich sea creatures. And, according to a 2018 study in PLOS Genetics, a DNA mutation that alters activity of TRPM8, a gene involved in cold sensitivity, may make living in cooler climes easier. Strengthening the case for its beneficial role in cold adaptation: The prevalence of the mutation increases with latitude. It’s found in 88 percent of European Finns, but only 5 percent of African Yoruba.

In addition to harsh environments, some groups have adapted to extreme lifestyles. Take the Bajau of Southeast Asia. Known as sea nomads, these marine foragers spend roughly 60 percent of their workday underwater, diving for food nearly 230 feet deep without scuba gear. As a genetics doctoral student, Melissa Ilardo was determined to see if DNA changes explain their incredible breath-holding abilities.

Finding firm evidence of this kind of environmental adaptation in modern humans is rare, but Ilardo was undaunted — she collected saliva for genomic sequencing from both the Bajau and a neighboring group without an aquatic lifestyle. She also took ultrasound measurements of their spleens; earlier research, on seals, found the size of the organ correlated with how long the marine mammals could stay underwater. “I was basically betting my Ph.D. on this working out,” says Ilardo.

The bet paid off. Her results, published last year in the journal Cell, identified two genetic changes in Bajau that improve diving by giving them larger spleens and potentially directing blood to important organs when oxygen is in short supply, as it is during a deep dive.

The study, like those of Arctic and highland peoples, “gives us a chance to learn about natural selection and evolution happening in our own species,” says Ilardo, now a National Institutes of Health postdoctoral researcher.

Bridget Alex is an anthropologist at Harvard University and a frequent contributor to Discover.