The Top Genetics Stories of 2006 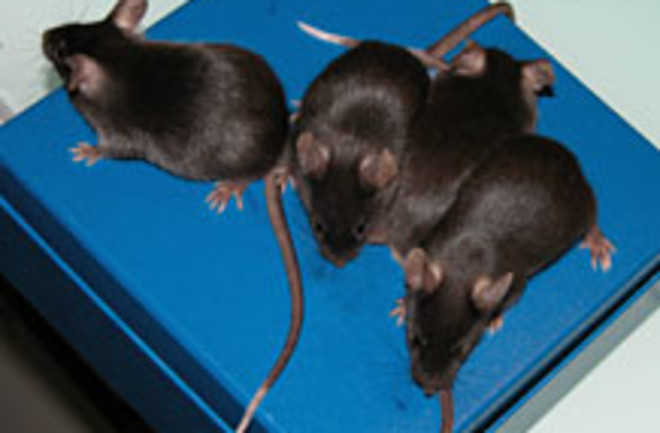 Minoo Rassoulzadegan's mice are unruly. In blatant violation of the laws of genetics—described a century ago by famed monk-scientist Gregor Mendel—they inherit their parents' coloring without inheriting the genes that cause it. Rassoulzadegan, a geneticist at the University of Nice, is not the first scientist to marvel at this apparent breakdown in the rules of DNA. "Geneticists have noticed strange, non-Mendelian things ever since Mendel," says geneticist Robert Martienssen of Cold Spring Harbor Laboratory. "We've been wondering what this weird stuff was for decades." In 2006 a suite of experiments by Rassoulzadegan and others have started clearing up the mystery surrounding epigenetics, the inheritance of traits that cannot be explained by DNA alone.

Rassoulzadegan stumbled upon her rodent scofflaws after altering a gene in gray mice so that their feet and the tips of their tails turned white. The big surprise came in the next generation. Some offspring also had white spots, even though they didn't inherit the mutated gene and so should have been all gray. When she looked for the cause, Rassoulzadegan found unusual amounts of RNA in the sperm of the mutant parents. She then injected RNA from the brains and sperm of those mice into ordinary gray mouse embryos. Many of the RNA-injected embryos likewise grew into white-tailed adults, regardless of the coloration written in their DNA.

In an experiment published two months after the mouse work, Vicki Chandler of the University of Arizona at Tucson found the same process at work in plants. She was investigating the cause of a perplexing phenomenon in maize in which the light-purple color of the stalk is passed on to offspring even when the gene sequence that caused it in the parent is not. She, too, traced the cause to RNA.

The mystery of this kind of heredity was first noticed in corn. The dark-purple color in the stalk can be silenced by RNA from light-purple parents.

Suddenly the old rules of genetics are looking out of date. Instead of being just a vehicle for DNA's commands, as scientists have long held, RNA seems to issue its own commands and alter what genes do in the next generation. "This phenomenon of the white-tailed mouse is just the tip of the iceberg," says Martienssen. And the environmental effects that alter one organism's RNA can apparently be passed down to its descendants almost indefinitely. In another landmark study this year, researchers working with nematode worms tracked a trait initiated with injected RNA over 80 generations. Nobody knows how RNA causes these long-lasting effects. One possibility is that it changes the way DNA is packaged in the cell, thereby permanently shutting down sections of the genome.

The implications are powerful. In September Michael Skinner of Washington State University announced that his lab rats inherit, epigenetically, their parents' propensity for a variety of humanlike diseases, including breast cancer, kidney disease, and high cholesterol. His results suggest that a parent's exposure to toxins—or simply bad diet—could harm her children for generations to come; the findings also hint that many seemingly genetic disorders could be treated in ways never before considered. "This opens up a whole new area for medical research and may be a way to combat disease," Skinner says.

The nascent field of epigenetic medicine is farthest along with respect to cancer: "Modifications of the genes that cause cancer are much more common than genetic mutations are," says Martienssen. That's good news, as epigenetic modifications—unlike mutations—are in principle reversible. Several drugs that take advantage of this fact are currently in clinical trials, and one, azacitidine, is already FDA-approved for treating myelodysplastic syndrome, a condition in which the body manufactures too few blood cells.

"The world of RNA opens new dimensions to gene control and gene expression," Rassoulzadegan says. Now that the rules are changing, so will accounts of "how complex we are, and why we are so different from each other, and how it was possible to evolve. We are at the level of a child compared to what there is to discover."

Intelligent design became a scientific reality this year with the report that researchers had custom-made a lifesaving microbe—one that helps make a much-needed drug against malaria. The feat is one of the first concrete applications of synthetic biology, an emerging field in which scientists reshuffle the components of cellular life in order to produce precisely tailored results.

Cobbling together the genes of three different species, chemical engineer Jay Keasling (Discover's 2006 Scientist of the Year)of the University of California at Berkeley transformed a metabolic pathway in yeast that allows the engineered microbe to produce a precursor to artemisinin, a compound used to treat malaria. Artemisinin is normally derived from leaves of the sweet wormwood plant, but it is difficult and expensive to extract in large quantities. A cheaper means of producing it could save many lives, as at least 1 million people die of malaria every year. "We made it over the most significant hurdle in our efforts to produce this drug," says Keasling. The remaining steps needed to manufacture it, he says, can be achieved using standard, inexpensive synthetic chemistry.

In August the National Science Foundation affirmed the promise of synthetic biology with a $16 million grant to establish the Synthetic Biology Engineering Research Center (SynBERC), a collaboration among such institutions as Harvard University, MIT, the University of California at San Francisco, and the University of California at Berkeley. Projects of interest include creating drugs that fight HIV, bacteria that seek and invade tumor cells, and biological sources of renewable energy. In a separate project, Craig Venter of the J. Craig Venter Institute in Rockville, Maryland, is attempting to synthesize a bacterium with the minimum genome needed to live.

Some researchers in the scientific community have expressed alarm, however, at the rapid progress in a field that could lead to a simple method for producing artificial pathogens, drug-resistant microorganisms, or new types of bioweapons. Not only has SynBERC set up an open-source system for sharing DNA sequences and the basic components of synthetic biology, but stretches of synthetic DNA can now be ordered over the Internet at relatively low cost. This has already allowed scientists to assemble the poliovirus from scratch and to resurrect the deadly 1918 flu virus. "DNA synthesis lets you go from genetic information, which is widely available, to genetic material," explains Drew Endy, an assistant professor of biological engineering at MIT. In May scientists met to discuss the potential misuse of advanced biological engineering techniques. They produced a draft of broad guidelines for the industry—including the oversight of synthetic DNA sales—but no formal regulations are currently in place.

Not all chemotherapy drugs are equally effective for all people, and finding the best treatment for an individual is a painful process of trial and error that wastes time and exposes patients to toxic side effects. In October Anil Potti of Duke University reported that new tests can dramatically improve the odds of choosing the right drugs for a particular patient's cancer.

Potti and his colleagues began by testing chemotherapy drugs on cultured cell lines from human tumors, such as from the lung, breast, or ovary. Then they linked the drug sensitivity of the tumor cells to the profile of genes expressed in those cells. When the team compared their results to previously published clinical and genomic data, they found that their model successfully predicted patients' chemotherapy response more than 80 percent of the time.

Clinical trials for targeted therapies, selected on the basis of the genomic tests, are scheduled to begin in early 2007. "This gives a message of hope to both patients and physicians that chemotherapy does not have to be random, and does not have to be associated with avoidable toxicity. It's a win-win situation," Potti says.

38. Lab Cooks Up a Healthier Pig

Bacon and sausages that are good for you? Possibly. In April scientists announced they had engineered transgenic pigs that produce omega-3 fatty acids, the same compounds that make fish such a healthy meal.

Most animals lack the gene to convert omega-6 fatty acids — which, when eaten in large amounts, contribute to heart disease, cancer, diabetes, and arthritis in humans — into healthier omega-3s. The only way to enrich meat with omega-3s has been to feed animals flaxseed, fish oil, or fish meal.

Two transgenic piglets are as healthy as their normal littermate.

Scientists from Harvard University, the University of Pittsburgh, and the University of Missouri at Columbia devised another solution: inserting into pig cells a gene that codes for an enzyme that converts omega-6s to omega-3s. The modified cell nuclei were then inserted into unfertilized eggs to create engineered pig embryos, which were implanted in a normal sow. The result: eight omega-3-generating pigs, whose ratio of omega-6s to omega-3s was fivefold lower than in ordinary piglets.

Whether this pig goes to market remains to be seen. The FDA has yet to permit any genetically modified animal to enter the human food chain.