The Toddler Who Climbed: Hominin Foot Unique In Evolution 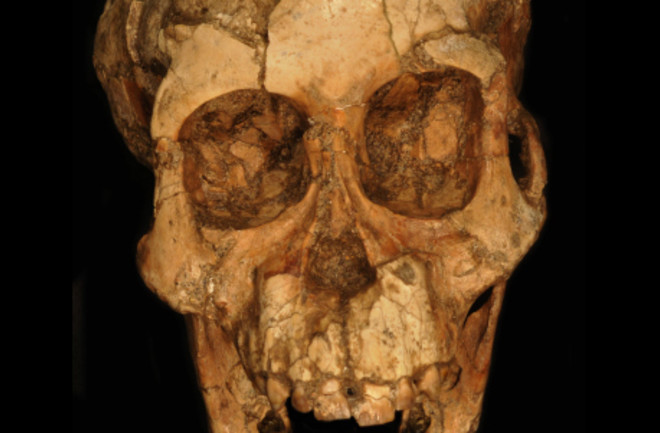 The fossilized remains of a 3.32 million-year-old Australopithecus afarensis child included a mostly complete skull and foot. The juvenile hominin foot retains traits of tree-climbing, surprising some researchers. (Credit: Zeray Alemseged) At some point in the last 4 million or so years, our hominin ancestors climbed down from the trees and got grounded. The transition between arboreal and terrestrial was, like just about everything in evolution, gradual. For decades researchers have debated, often heatedly, which hominin species was the first to be fully bipedal, walking and running rather than climbing. Today, great answers come in small packages: A rare, mostly-complete juvenile hominin foot reveals new and unprecedented details of the transition from tree to ground. The fossil remains of a hominin known as DIK-1-1, roughly three years old at time of death, are not new to science. They were uncovered in 2002 in Dikika, Ethiopia, and dated to be 3.32 million years old. The remains include a skull as well as ribs, vertebrae and several other bones. A partial foot fossil was found near the remains as well, but it was embedded in rock. After years of painstaking removal of that rock, researchers were able to study the mostly-complete foot and realize its significance: It's a very rare foot of a juvenile hominin, and it's the oldest hominin foot to preserve all of the tarsal bones, which make up the back half of the foot, more or less, and show how the ankle aligned. Today, thanks to its state of preservation, the researchers announced that the Dikika juvenile's foot offers us a unique look at that period of transition from life in trees to life on land: Numerous features retained in the foot suggest that the young individual spent more time in the trees than adults of the same species, perhaps for safety. Hey, Lucy, I'm Home (In The Trees)! The Dikika child belongs to Australopithecus afarensis. Numerous individuals of the species, which existed 3-4 million years ago, have been found throughout Eastern Africa; its most famous member, without question, is Lucy, unearthed in 1974. Some paleoanthropologists, including Donald Johanson, who found Lucy, believe she and all her kin were fully bipedal, adapted to walking efficiently on two legs and living on the ground. Not everyone agrees, however. In recent years, studies re-examining her bones suggest Lucy spent significant time in the trees and may have died after falling out of one. It's possible, of course, that both the grounded and up-a-tree camps are correct: A. afarensis may have spent most of its time on the ground, but climbed trees when needed, either for food or as a refuge from the considerable number of large and bitey predators found in the same environment. And if you're thinking, "Hey, I'm no australopith but I'd still climb a tree if a lion was after me," I have no doubt. So would I. We just wouldn't be as efficient at it as Lucy and her kin. The issue here is that adaptations are trade-offs. To become very efficient at walking long distances on two legs, as modern humans are, we had to give up the physical traits that made our ancestors and early relatives very efficient at climbing trees. Climbing The Tree Of Life Which brings us back to DIK-1-1f, the juvenile hominin foot at the center of today's study. The preserved ankle joint is very similar to that of modern humans (and adult A. afarensis fossils). In life it would have positioned the knee directly over the ankle, which points to efficient bipedalism.

The Dikika juvenile's foot from different angles (left) and compared with the remains of an adult foot of the same species, A. afarensis. The hominin foot can reveal many details about the individual's life, including whether their time was spent in trees or on the ground. (Credit: Jeremy DeSilva & Cody Prang) However, a number of other features in the toddler's foot differ from adult A. afarensis as well as modern humans, both juvenile and adult. Humans young and old, and adult A. afarensis, for example, have a heel bone made for walking — it's shaped to absorb heel strikes. The Dikika hominin foot, however — the only juvenile A. afarensis foot in the fossil record — has a heel bone more similar to that of a juvenile ape, which is not adapted to efficient walking. Another example: A. afarensis adults have more of an arch in their foot than apes but would still be considered flat-footed compared with the average modern human. DK-1-1f's arch is weaker still, and falls outside the range of toddler humans. Grasping The Situation Perhaps most intriguing, DK-1-1f appeared to have had significantly greater mobility of the big toe than do humans of any age. Efficient bipedalism requires a loss of the ability of the big toe to grasp, but despite other bipedal traits, it seems DK-1-1f's grabby big toe was, well, still hanging on, evolutionarily speaking. The big toe was not, however, as mobile as those of apes or the earlier hominin Ardipithecus. Adult A. afarensis big toe mobility, meanwhile, was intermediate between apes and humans, but still closer to humans than that of DK-1-1f. The juvenile hominin foot's unique mix of traits led the authors to conclude that young A. afarensis, while capable of walking on two legs, retained some grasping ability with their feet. As they matured, however, their feet grew to be better-suited for walking. While fossils of any hominin foot are rare, DK-1-1f is particularly important because it captures a unique transitional form not seen in any other fossil. It hints that there was likely some significant evolutionary advantage for A. afarensis to climb easily as a juvenile and then walk efficiently as an adult. If you subscribe to the notion that the trees offered protection from terrestrial predators, it's easy to speculate that, in times of immediate danger, or just if Mom and Dad had to go forage on the ground, having Junior climb a tree to safety would have been an attractive option. The paper appears today in Science Advances and it's open-access, so enjoy.

Researchers superimposed the Dikika juvenile's fossil foot on the print of another hominin foot: that of a human toddler. (Credit: Jeremy DeSilva)