Imagine that a massive hole appeared in a wall of your house, and you'd decided to fix it yourself. You head over to a DIY store and load up on plaster, tools and paint and look forward to many hard and tedious hours of work. If that seems like a chore, you might get some perspective by considering the plight of the gall aphid Nipponaphis monzeni. When holes appear in their homes, some unlucky individuals are tasked with repairing the damage using their own bodily fluids. They sacrifice themselves for the sake of some DIY.

Some species of aphids are heading towards the incredibly cooperative lifestyles of social insects like ants, bees and termites. They live in large hollow growths called galls, that sprout from the very plants whose sap they suck. The galls provide them with protection from predators, shelter from the elements and constant food. They are a precious resource indeed, and every colony of social aphids have a special caste of sterile individuals whose job it is to defend the gall and attack intruders. These are the soldiers.

But in a few species, such as N.monzeni, soldiers have a truly bizarre part-time job- they are suicide-plasterers. When their homes are breached, the soldiers leach their own bodily fluids onto the wounded area, mix it with their legs and plaster it over the hole. The liquids soon harden and within an hour, the gap has been plugged at the cost of the soldiers' lives.

The aphids' gall-repairing antics are remarkably similar to what happens when animals develop cuts and wounds. The fluid around the area clots and hardens to form a scab. This provides a temporary seal, that gives the surrounding cells enough time to grow, divide and restore the broken tissues. The exact same thing happens to the gall - the only difference is that its clots and scabs are provided not by the plant, but by the aphids it houses.

Mayako Kutsukake from the National Institute of Advanced Industrial Science and Technology in Japan spent three years studying wild colonies of N.monzeni, the only local species of gall aphids that employs suicide plasterers. They create their galls in spring and use them throughout the summer, abandoning them in the autumn when winged adults leave for new homes. The plasterers' services are particularly needed in spring, when the galls are young, thin and vulnerable.

They clearly have a very important job. Kutsukake found that holes in the gall are serious affairs that can kill the entire colony. He found that 92% of galls whose repair was halted (either naturally or by his hand) were dead within a month, while 82% of those that were completely repaired were still around. If Kutsukake did the repairs himself with glue, most of the galls survived. If he absorbed the plasterers' body fluids with tissues, the galls always died. In summer, when the galls' usefulness is waning, the plasterers abandon their duties, and any galls that develop holes at this point go unrepaired and soon die.

Kutsukake took some galls back to his laboratory and cut them open at different points in time after the initial wounding. He found that even after the initial clot is produced, the plasterers aren't finished. Those that are still alive gather around the wound and they actively stimulate the plant to repair the damage. Over the course of a month, the plant grows new tissue to cover the hole, leaving barely any traces of a scar. The aphids' scab is squashed and lifted by the growing tissue and eventually disappears. 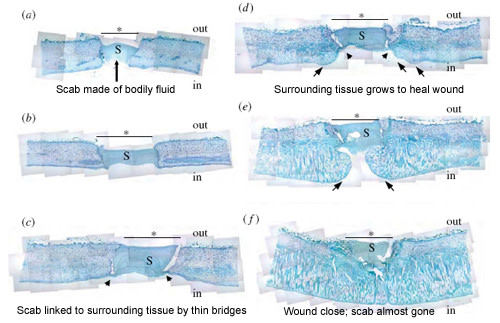 Kutsukake proved that the aphids were responsible for this regeneration by treating repaired galls with insecticides. That killed all of the gall's tenants and even though the hole had been filled with a scab, the plant never regenerated the tissue around the hole. The aphids not only scab over the wound, they're responsible for healing it too.

It's in the aphids' interest to actively encourage the plant to heals its wound, rather than just relying on the scab. Galls grow quickly in the spring, which means that any holes would become bigger. The scab is a temporary fix - unless the hole is properly repaired by the plant, there's a risk that the scab would just detach and fall off. Indeed, in the weeks after repair, Kutsukake found that the scabs were just connected to the gall tissue by thin bridges, suggesting that the plasterers constantly top up their efforts to prevent the scab from dropping off prematurely. This may be why they continue to stick around the damaged area for some weeks after their sisters have given their lives to form the initial plug.

The details of the plasterers' work are still unclear. Insects seal wounds with clots and scabs like humans do, although the biochemistry behind their process is different. Kutsukake thinks that the soldiers actively trigger the chain of molecular events that leads to clotting before they discharge their fluids, although that's just speculation for now.

Nor do we know how the plasterers tell the plant to fix the injuries. Perhaps they actually inject hormones and other chemicals into the plants with their stabbing mouthparts. Certainly, scientists think that this is how they get the plant to produce a gall in the first place, and some soldiers inject enemies with venomous enzymes.

Another species of social aphid, Pemphigus spyrothecae, also repairs gall holes, but they don't commit their own bodily fluids to the task. As a result, the repairs take much longer. So why has N.monzeni evolved such an extreme fix? It may be that their galls are much larger and harbour thousands of individuals, whereas those of other species often house mere hundreds. It may be that colonies need to be very large in order to justify the tactic of suicide plastering, an extreme and costly defence that requires some individuals to give up their lives for the group.