The Secrets Beneath a Suburb

Experts are uncovering millennia of history under a Turkish megacity’s outskirts. 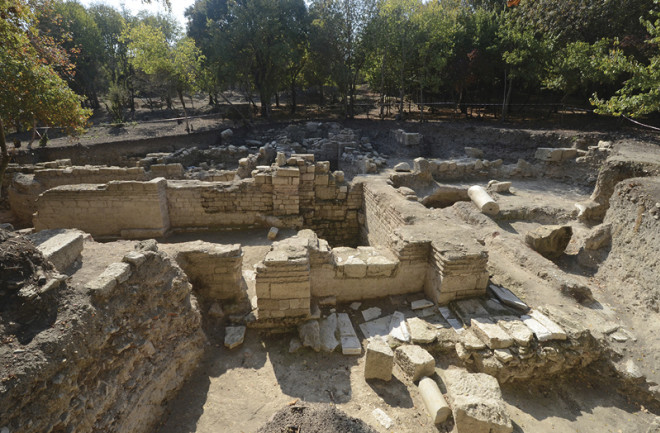 A view of an imperial building from the late Roman period, which lasted roughly A.D. 250 to A.D. 450. | Haldun Aydinguyn

When Sengül Aydıngün first started surveying the shores of Küçükçekmece Lake in the western suburbs of Istanbul, colleagues doubted she’d find any evidence of ancient human settlement; other researchers had already surveyed the area and hadn’t turned up much. But the area’s geography and water resources looked favorable for early habitation, and her hunch proved correct.

Now, 10 years later, the Kocaeli University associate professor and her team are steadily turning up new evidence — including the exciting finds shown here. These objects are painting vivid pictures of life at the site now known as the Bathonea excavations, from the earliest days of the Lower Paleolithic era to the bustle of a busy trading port during the Byzantine Empire.

In just a square meter -- about the size of a dining table -- the team unearthed more than 400 small ceramic or glass bottles alongside mortar and pestles, and another 300 nearby. The finds suggest Bathonea may have been an early pharmacy site. The bottles' contents chemically resemble the formulas for modern drugs used to treat depression and heart disease. | Haldun Aydinguyn

FAST FACTS2007: Site is discovered.2009: Excavations begin.Date range of finds: Lower Paleolithic to Late Ottoman (roughly 800000 B.C. to the 18th century), including remains from Neolithic, Hittite, Hellenic and Byzantine civilizations. Excavations led by: Kocaeli University and the Ministry of Culture and Tourism in Turkey

Experts have long debated how and when agriculture spread from Mesopotamia into Europe. The discovery of 9,000-year-old flint tools made from local stone -- the earliest such tools found in the European part of Turkey -- helps fill a gap in the story. Previously, flint tools from this era were discovered elsewhere in Turkey, but never on the European side of the country's continental divide. | Haldun Aydinguyn
1 free article left
Want More? Get unlimited access for as low as $1.99/month
Subscribe