The Secret of the Flea’s Famous Jump 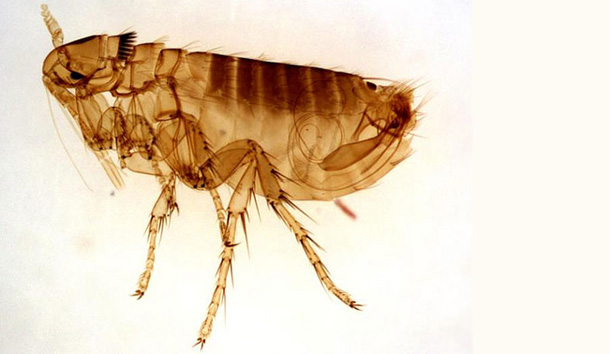 Fleas are remarkable jumpers: They can travel 200 times their own body length in a single leap, and can withstand acceleration forces of 100 Gs. But exactly how do they make such incredible jumps? Although we've known for decades that fleas store energy in a springy protein called resilin before they launch into the air, it's remained a mystery whether they use the flea-equivalent of feet (called tarsi) or knees (called trochantera) to transmit that energy to the ground. But with 21st-century high-speed cameras, researchers have now put the debate to rest: the answer is in the feet. Now, the first task in experimenting with fleas is to find fleas. Luckily, the warmhearted individuals at England's St. Tiggywinkles Wildlife Hospital Trust have flea-ridden hedgehogs just waiting to lose a few bugs--and so that wonderfully named hospital donated a few fleas to a good cause. The study, published in the Journal of Experimental Biology, included both video and flea-leap simulations. But the researchers--led by Gregory Sutton at the University of Cambridge--made their first insights using the same methods that were used decades ago:

Like his predecessors, Dr Sutton drew his first clues from detailed anatomical studies of the fleas.... These revealed relatively large spines near the insects' feet; structures that suggested that it was these areas that gripped the ground for traction. [BBC]

Until recent years, high-speed cameras weren't powerful enough to answer this foot-or-knee question, but that doesn't mean the researchers have it easy now that they've got the technology: there's still the problem of getting the fleas to jump at the right time and in the right direction. And if you've ever tried to make a flea jump, you'll know that's not an easy task:

"We finally figured out that the fleas wouldn't jump if it was dark," Dr Sutton explained. "So we'd turn off the lights, move the camera and chamber to get the flea in plane, then zap the lights on and the flea would jump along the plane of the camera." [BBC]

Each avenue of exploration came up feet. For starters, flea knees never even touched the ground in about 10 percent of the jumps, Sutton says. With or without knee contact, the fleas still jumped with the same speed and acceleration. The team also found long spikes on the flea tibia and tarsi — good for traction, perhaps — but only short hairs on the knees. The jumps Sutton and Burrows watched on film also matched the predictions in their feet-jumping but not knee-jumping mathematical models. [Science News]

Certainly, more knowledge of how fleas jump is good, but there is an underlying--and more practical--purpose to this study:

Dr. Sutton thinks that superior springs are just one of several important lessons fleas can teach engineers. They might also learn how to build robots that can leap over rough terrain. “Insect jumping is incredibly precise and incredibly fast,” said Dr. Sutton. “If you could build a robot that could do that, it would be fantastic.” [New York Times]

Related Content: 80beats: The Water Flea: A Tiny Crustacean With a Mighty Genome 80beats: Ostriches Are Endurance Runners, Thanks to the Spring in Their Steps 80beats: Researchers Crack the Case of Why Flies Are Hard to Swat Science Not Fiction: Prosthetic Limbs: Not Just Peg Legs and Hooks Any More