The Secret Behind Ants' Super-Strong Teeth

Metal reinforcement gives ants and other arthropods a sharper-than-expected bite. 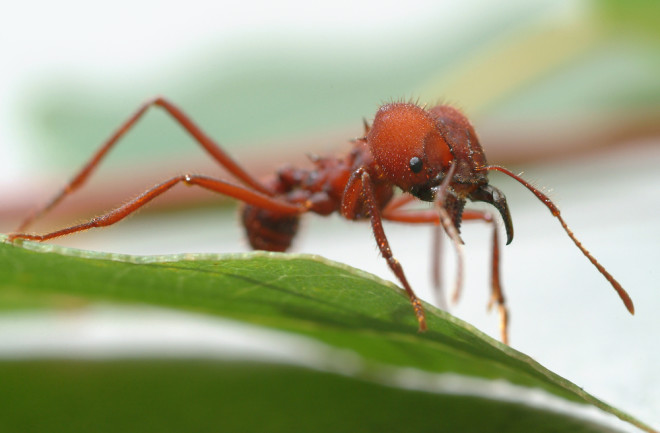 Ants pack a sharp bite far above their weight class thanks to the infusion of hard metals like zinc and manganese in their mandibles.

New research using an advanced microscope shows that a number of arthropods such as ants, camel spiders, scorpions and bristle worms have adapted the use of these hard minerals to help give their sharp appendages extra strength when cutting through leaves or stinging their prey.

Typically, small creatures don’t have as much force as larger creatures when it comes to biting, stinging or cutting. A rough rule of thumb is a creature that is 10 times longer than another can apply 100 times the force if the muscles of both creatures are in equal proportion to their body size,” says Robert Schofield, a physicist at the University of Oregon.

“The trick is they use sharp tools that focus that much smaller force onto a much smaller area and basically get the same pressure,” Schofield says.

But these creatures aren’t always blessed with a knife sharpener. Schofield and his colleagues wondered how they could maintain a strong level of sharpness as their fangs, stingers or mandibles were worn down with use over time. In the case of leafcutter ants, for example, the average sharpness of their mandibles declines over time, making older ants work twice as hard to cut through the same leaves as younger ants.

“It can be fatal for a small organism relying on that [sharpness],” Schofield says. “The wear, for these small organisms, may be enough to set their lifespan.”

Schofield has always been interested in using physics to better understand biology — he says he could never decide whether to become a biologist or physicist in his studies. He opted for the latter, and during his Ph.D. research, he helped to invent a microscope that used atom probe tomography.

In a study published recently in Scientific Reports, Schofield and his colleagues describe how they used this Atomic Force Microscope and built miniature testing machines to better understand the mechanics of strong bites and stings. They examined the mandibles, stingers and other tools of leafcutter ants (Atta cephalotes), Nereid worms, (Neanthes brandti), scorpions (Hadrurus arizonensis), spiders (Araneus diadematus) and other species.

They found that the tools of many of these creatures contained a lot of zinc and manganese. “It was very bizarre because there was so much of it,” Schofield says.

The mandibles of ants, for example, contained up to 16 percent zinc. In the stingers of scorpions, there was up to 20 percent zinc.

Schofield says these hard materials help the creatures maintain sharp enough tools to cut through leaves or sting through the hard shells of their prey. “These are really strong advantages from the evolutionary point of view,” he says.

The zinc also makes their stingers or mandibles stiffer — an important factor that helps maintain sharpness under the pressure of cutting and puncture. The researchers calculated the force required to puncture hard materials using stingers with zinc and manganese and found it made a huge difference compared to the force a creature would need if its stinger was just made out of other materials from the creatures’ exoskeletons. The hardness of ant teeth also increases when zinc is added, their measurements showed. Without zinc, they are about as hard as plastic. With zinc, their teeth become as hard as aluminum.

The researchers also say the fangs and stingers they examined represent an entirely new class of structural biomaterials — the other two being the mineralized materials of bones or teeth and the plain organic materials like those found in fingernails.

Schofield says the team is conducting follow-up research to see whether some of these creatures can replenish or self-heal the zinc and manganese levels in their mandibles or stingers when they break.