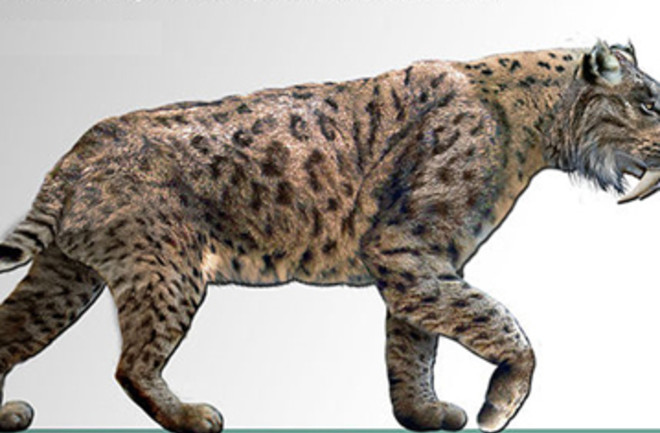 Don't be fooled by those sinister fangs: For saber-toothed cats, much of the killing power was concentrated in the front limbs. The long canine teeth that gave the extinct cat its name are an unmistakable feature, protruding from the snarling faces of models in natural history museums everywhere. But while those fangs were deadly, their great length also made them delicate and liable to break if the cat's prey jostled and writhed in an attempt to escape. Researcher Julie Meachen-Samuels had an idea how such a precarious killing device could have evolved: The cats had incredibly strong front limbs to hold down prey while they used their saber teeth to cut them up. For a study that appears in the journal PLoS One, the team x-rayed the bones of many saber-toothed cats (Smilodon fatalis), and compared them to a variety of modern-day cats. According to Meachen-Samuels:

Species with longer limbs generally had stronger bones. However, while saber-tooth leg bones fell within the normal range, their arm bones were exceptionally thick for their length. Not only that, their arms also had thicker cortical bone — the dense outer layer that makes bones strong and stiff. "When I looked at Smilodon, I knew they were thicker on the outside than other cats, but I was really shocked at how much thicker they were on the inside as well" [LiveScience].

that the cats would've had relatively weak bites, ruling out the kind of aggressive biting and thrashing that animators and filmmakers might image. And determining the thickness and strength of these arm bones reinforces the theory that the saber-toothed preators attacked in a different way than modern cats.

The strong forelimb–sharp tooth combination was perfect for pouncing on prey, pinning it down and quickly gouging its throat. Sabertooths were thus probably good at hunting large animals like bison and camels [Science News].

However, the researchers say, the cats may have been too well adjusted to their killing method. When those large animals died out during the last ice age, the saber-toothed cats' specialized equipment could have made them unfit to adapt to new prey and doomed them to extinction. Related Content: Not Exactly Rocket Science: Saber-Toothed Cats Had Weak Bites