The Return of the Vikings 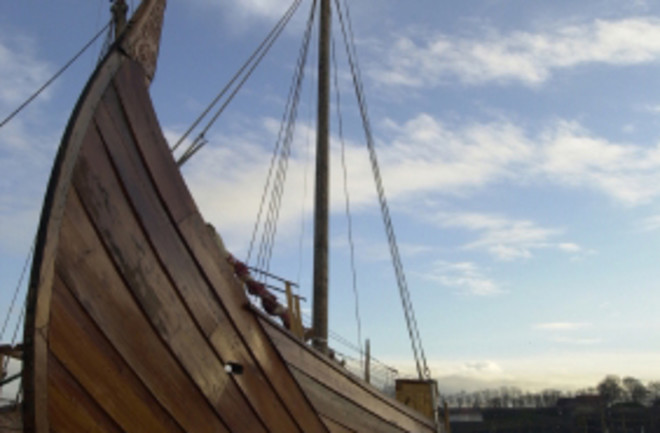 Horns resounded along the docks in Dublin as a procession of about 50 boats made its way into the harbor. Leading the way was the 98-foot Sea Stallion, a Viking warship replica on the last leg of an experimental journey. Thousands of onlookers watched as the ship lowered its single square sail and its oars dipped into the water. The crowd cheered. After 965 years, the Sea Stallion—a replica of an 11th-century Viking vessel submerged off the coast of Denmark and built in Ireland—had finally come home.

Although Vikings are famous for sailing across the Atlantic to North America, raiding the coasts of Europe, pillaging North Africa, navigating the rivers of Russia, and even exploring the Caspian Sea, historians know relatively little about the technology used in the Viking longships. Hoping to reveal details on exactly how Viking ships were sailed, researchers from the Viking Ship Museum in Roskilde, Denmark, enlisted 61 modern Viking wannabes to take on the open seas. They hopped aboard the Sea Stallion for a 2,000-mile, six-week spin from Scandinavia to Britain and Ireland.

The experiment was unrelenting in risk. During sea trials in a fjord near Roskilde, the entire hull wobbled so much that it was in danger of disintegrating. The researchers stopped, consulted the archaeological evidence, added more support, and concluded that Vikings were better engineers than scholars had suspected. While the longship braved a storm with 50 mph winds in the North Channel, the crew found out the hard way that the hemp and leather rope connecting the rudder to the hull was probably not the right material. In the storm, the rope snapped—for the second time—forcing them to take down the sail and leaving the foundering vessel at risk of being swamped by the waves. The crew managed to fix the rudder despite the massive waves that continued to pummel the ship. Researchers now think that rather than hemp, different materials—like twisted elm branches, used in other Viking ships—were used as ropes.

While sailing patches of particularly rough seas, the modern Vikings’ sleep suffered. As they were battered by wind, rain, and spray, they slept in shifts but couldn’t even manage four hours each night. The large amounts of rope on deck needed for the sail leave no room for makeshift shelters. While the modern Vikings swaddled themselves in waterproof gear, the original Vikings would have worn foul-smelling fat-and-ocher-smeared skins and used woolen blankets smeared with fat on one side to form a primitive sleeping bag.

Rowing the Viking vessels was also far more difficult than expected. The trial made clear that the vessel could move in reasonably calm waters on oar-power alone—even using every second or third oar—with the sail and mast lowered. But when they were out in rougher waters on the open seas (rather than the calm inland waterways), the Vikings would have needed to pull in the oars and raise the sails to get moving.

The next stage of the experiment will take place next summer when the Viking voyage research operation will travel back to Denmark from Ireland, allowing some hardy salts another chance to relive the grueling days of the Vikings on the open sea.