The Race to Find the World's Biggest Underwater Caves

The 100-mile-long Sac Actun cave is one of the last unexplored places. 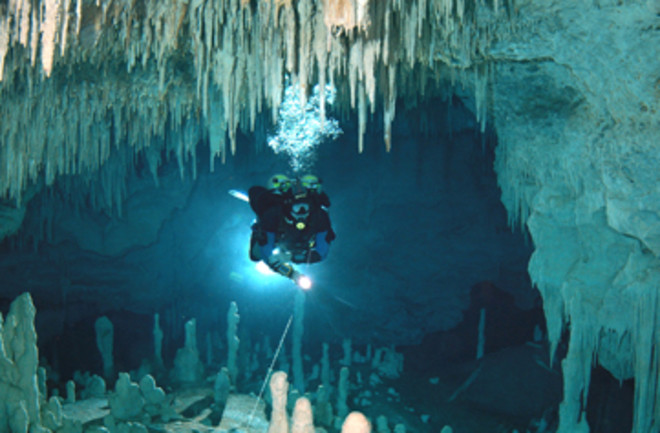 It was the wrong day for Stephen Bogaerts to have for­gotten his wet suit, but forget it he had. What followed this realization was a manic drive back to the diving center, then a hurried leap into the water. The hour-long delay turned out to be fortuitous. His diving partner, Robbie Schmittner, was swimming downstream from a different starting point, carried by a current that Bogaerts would be fighting on his opposite path. Normally the current rages, but on the day in question, January 23, 2007, it was unusually gentle. So Bogaerts reached the rendezvous point a half hour sooner than expected, and Schmittner 20 minutes later. As Schmittner turned the last corner, he saw Bogaerts’s light flickering in the distance. The ethereal glow marked the juncture of two giant caves—Sac Actun and Nohoch Nah Chich. With their discovery of the opening, the divers had proved that the two caves were really one, now called simply Sac Actun. At the time, that made it the largest known underwater cave in the world, with almost a hundred miles of passages charted. Schmittner dropped a bottle of Moët & Chandon champagne to the cave floor to mark their arrival at that special juncture in one of the world’s greatest (yet least heralded) natural wonders.

For Schmittner and Bogaerts, the exploration is never done. After they discovered the Sac Actun connection in 2007, another Yucatán team showed that the underwater cave Ox Bel Ha, at 170 kilometers (106 miles), was longer still. But the race for the long­est is not over. Recently Schmittner and Bogaerts were excited to learn that Sac Actun lies within 18 feet of Dos Ojos, another cave system. If they find a connection between the two, the union could again put Sac Actun on top and possibly make it the world’s second-longest cave, underwater or other­wise, depending on how long the connecting passage is. The pair hope to then find a link with Ox Bel Ha. If all those caves are joined, the whole system would rank behind only Mammoth Cave in Kentucky, which has almost 600 kilometers (about 370 miles) of passage­ways. At the pace Schmittner and Bogaerts are going, even overtaking Mammoth Cave—thought by many in the caving community to be a ridiculous goal—might be a possibility.

The two explorers, both diving instructors, have spent nearly a decade charting the Yucatán’s vast network of under­water caves, which they enter through portals called cenotes—sinkholes in the limestone that forms the peninsula south of Cancún. In some of the cenotes, the water is so clear that when you look up from the bottom, fish seem to be swimming in the sky. Clear or not, when you reach the bottom of a cenote you find tunnels, often marked by stalactites, stretching out under the earth. Go one way and you encounter caverns so vast that a 747 could fly through; Bogaerts and Schmittner navigate these with torpedo-shaped scooters. Go another way and you might run into passages so narrow that navigating them becomes a process of spelunking more than swimming. As you take in the grandeur—or snake your way through—only the sound of your breathing reminds you that you are out of your element.

Expert scuba divers like Schmittner, originally from a small town near Frankfurt, Germany, and Bogaerts, from Greater London, have learned to control their breathing so they use less than a quarter of the air a novice does. They still take plenty of air with them, though. On this day Schmittner went in with five tanks strapped around his body; Bogaerts, who had to wriggle through some narrow passages, called restrictions, brought three. One of these he stashed in a passage along the way, a second he clipped to his butt, and a third he pushed in front.

When a passage closes in, it is all too easy to agitate the silt on the cave floor below, reducing visibility to nearly zero. Skilled cave divers like Bogaerts and Schmittner move gracefully to maintain visibility going in, but getting out alive is still a technical feat. Maneuvering safely requires deft use of a nylon rope that they tie off every time a cave wall turns. When they are done exploring, they turn around and follow the cord to retrace their way back out. Lose the cord, they know, and they might be lost for good.

Getting a full picture of the cave means painstakingly calculating the water depth and taking a compass bearing at every tie-off, then measuring the distance between each set of points. Along with GPS readings gathered at an entrance, these measurements allow explorers to create detailed cave maps. It is a long process; mapping Sac Actun took Bogaerts and Schmittner five years.

Jim Coke, a diver who was the first to explore Sac Actun in the late 1980s, has created a large and growing library of maps of the Yucatán caves through his Quintana Roo Speleological Survey, which aggregates data gathered by cave divers like Bogaerts and Schmittner. First he translates their data into a series of lines representing distances and angles. Then he adds measurements of the width and curvature of the cave tunnels, finally using specialized computer software to generate beautiful maps of the complex underwater terrain.

“Unless you survey a line, you have not been there, because you don’t know where you are,” Bogaerts says. It is only by constructing a record of what they have seen that cave explorers feel they have seen it at all.

The maps do not just chart the territory; they also help gauge pollution drifting down from human activity on land. An hour and a half south of Cancún, most of the water is still pristine, Schmittner says. But massive development—potentially including a new airport—is planned for the area that Mexican authorities tout as “the Riviera Maya.” Contaminants diffuse much more quickly through water than through limestone, so if the caves are all connected, pollution will spread rapidly. At the moment, sewage from hotels and resorts is generally pumped into deep-injection wells 90 meters (about 300 feet) below ground level, sometimes straight into undersea caves. And solid waste is dumped into unlined pits, where groundwater can carry it into the porous limestone.

Some maps remain under wraps, kept in privately held collections by the explorers themselves because they point the way to archaeological and paleobiological treasures that have been protected by the waters for thousands of years. Explorers of cenotes early in the 20th century found treasure troves of Mayan artifacts in the underwater caverns, but these have now largely been plundered. Still, many human fossils from around 10,000 years ago or more remain. Schmittner describes a human skull he found half-buried in limestone. He left it there, marked only in his memory and private records. He says he and Bogaerts also found two human skeletons; the bones appear to date back about 12,000 years, placing them among the oldest human remains in the Americas. The two divers have discovered mastodons at six sites as well as small horses, giant tapirs, and giant sloths. But the Mexican national archaeology agency has just a single archaeologist trained in cave diving, so it could be many years before science catches up with the finds.

“Everything we do, we pay for out of our own pockets, because we love it,” Bogaerts says. “We’re not trying to do it for anyone except ourselves—just go out in the jungle, find cenotes, jump in, and go exploring.”

Haunting in their beauty and largely unexplored, vast networks of under­water caves span the North American continent, from California and Missouri to Florida and the Yucatán. For divers who venture into this alien and sometimes hostile environment, preparation is essential. “Many experts estimate that less than 1 percent of the recreational diving population possesses the knowledge, skills, attitude, and judgment needed to cave dive as safely as possible,” says Johnny Richards, a former attorney who now works full-time as a cave diving instructor in northern Florida and runs the informational Web site CaveDiving.com.

Indeed, more than 430 people have died while cave diving since 1960. The National Speleological Society warns that prospective divers must be well trained and cognizant of all the risks associated with cave diving. “Interviews with the surviving dive buddies suggest that frequently the divers originally planned only to take a quick peek ‘just inside the cave entrance,’” the society reports. “In many instances the divers got into trouble immediately. In other cases, they decided to continue farther into the cave despite their plan and became hopelessly lost.”

If you are still set on exploring these underwater worlds after calculating the risks, you must “first become a certified scuba diver and accumulate open water diving experience. Then seek out a cavern and cave diving course,” the society advises (see “Recommended Resources,” for links to instructors authorized by the National Speleological Society and the National Association for Cave Diving). For the diver with the right preparation and equipment, though, the payoff is entry into a remarkable alternate world.

Where to use your new skills? Although underwater caves are found in many areas of the United States, most tend to be cold, murky, and just plain inhospitable, according to Richards. The initiated generally head to the warmer, clearer caves of north-central Florida and the Yucatán. There are so many splendid caves and tour guides to choose from in these regions that you will have to do some homework to plot your personal trip. While we cannot recommend specific equipment or tour companies, the national and international groups listed below can provide a good start.