The monuments at Giza might be the best known, but another pyramid preceded the greats. 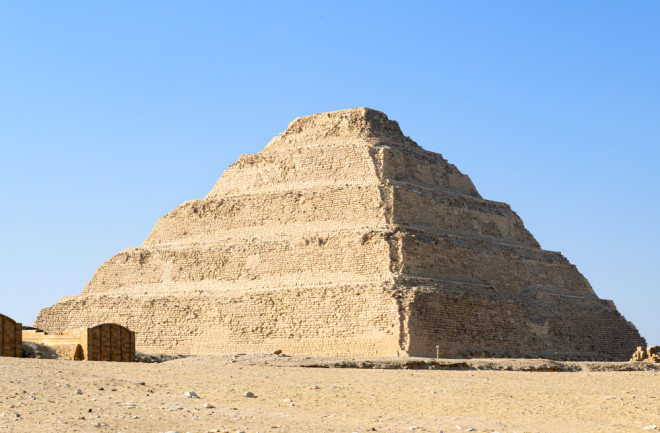 The Pyramid of Djoser in Saqqara, Egypt. (Credit: Intarapong/Shutterstock)

Everyone knows the Great Pyramid of Giza. Towering over the edge of the Western Desert, it’s perhaps the best known of the handful of monuments at Egypt’s Giza Necropolis. But about 10 miles south of the largest pyramid in the world lies another, much smaller one, decades older than any of the Giza pyramids.

The Pyramid of Djoser, also spelled Zoser, is widely believed to be the oldest pyramid in the world. It dates back to around 2630 BCE, while construction on the Great Pyramid of Giza began in 2560 BCE, roughly 70 years later.

Without the construction of Djoser at Saqqara, the Great Pyramid of Giza may have never existed. There were, quite literally, several steps for architects to climb before they could successfully build the pointy-tipped monoliths that have earned the status of world wonder.

Like all Egyptian pyramids, the Djoser pyramid was built for a ruler. King Djoser was the second ruler of Egypt’s third dynasty and held the throne for an estimated 19 years.

But behind the king’s monument was a great architect, named Imhotep. He was the chief minister to Djoser and left behind a legacy. If the name sounds familiar, it may be because the architect become known as the Egyptian god of wisdom and medicine — now listed among few other actual, historical people who were named full deities.

Imhotep was a jack-of-all-trades — and a master in his own right. In addition to designing the Pyramid of Djoser, he was also a priest, poet, mathematician, astrologer and a physician. He is also remembered for his medical treatises, in which he argued illness was not brought on by gods or evil spirits, but rather occurred naturally.   The monument Imhotep designed for Djoser is the oldest-known step pyramid, which is constructed of stone and arranged in layers to create platforms on the outside. It is flat at the top, but takes on a similar shape to the pointed Giza pyramids.

But the evolution of the pyramid didn’t start and end with the massive stone buildings that we see in Egypt and other parts of the world today. Other structures preceded and grew alongside the pyramids, such as ziggurats. The terraced structures were constructed by several ancient civilizations and can still be seen in some parts of the world, such as modern-day Iraq and Iran.

As for the Egyptians, it took few tries before they began to successfully build upwards and create that iconic pyramid shape.

Before the first Egyptian dynasty, people buried their dead beneath piles of dirt — presumably because of their belief that creation originally sprang from a mound of Earth. That practice eventually evolved, once rulers began to take the throne, and Egyptian royalty were buried in brick monuments called mastabas. They were originally built from mud bricks, but later were made of stone — the same material as the pyramids.

Mastabas became the foundation — literally — for the step pyramid. Imhotep used the box-like monument structure and stacked several mastabas on top of each other, building up into the sky.

Today, the 204-foot-tall pyramid pales in comparison to the 481-foot-tall Great Pyramid, which was built to honor King Khufu. But the Pyramid of Djoser's legacy lives on. The landmark recently reopened for public viewing after a 14-year restoration period — its place in history secured, in part, by the world wonder that it preceded and influenced.