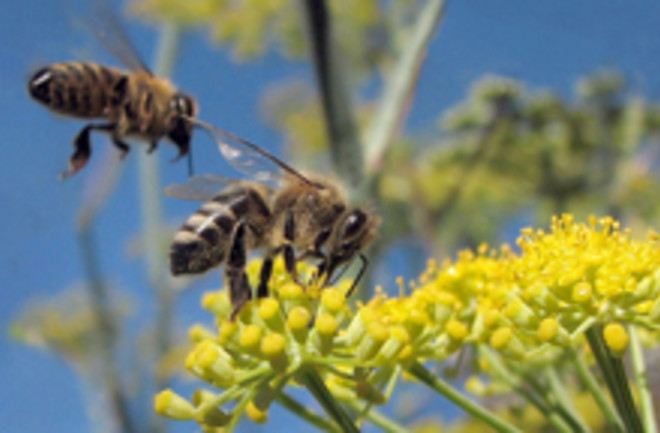 Hoping to fight off "colony collapse disorder," the mysterious affliction that has devastated honeybee colonies, some British scientists want to get bees to start washing their feet—but with the intention of getting them dirty, not clean. A team of University of Warwick researchers led by Dave Chandler believes that parasitic Varroa mites might be behind the honeybee's decline; the mites can feed on young or old bees, and their presence usually spells doom for the entire colony. Varroas develop resistance to chemical pesticides, too, so the scientists turned to a more natural threat—fungi. Having found four kinds of fungi that kill Varroa mites but don't seem to bother bees, the researchers want to put foot baths full of the fungi at the entrances to beehives. Bees are touchy-feely insects constantly passing food and pheromones, Chandler says, so they'd quickly pass the fungus around their colony, unwittingly protecting themselves against the parasitic mites. Using one creature to protect a second against a third—this is the same kind of tactic as the Japanese plan we covered two weeks ago, where conservationists imported colonies of bees to protect sea birds from unfriendly crows in the area. This time, however, the bees are the helpless victim, not the hired gun. Tinkering like this tends to make us suspicious, but given bees' importance to agriculture, we can't afford to lose them.