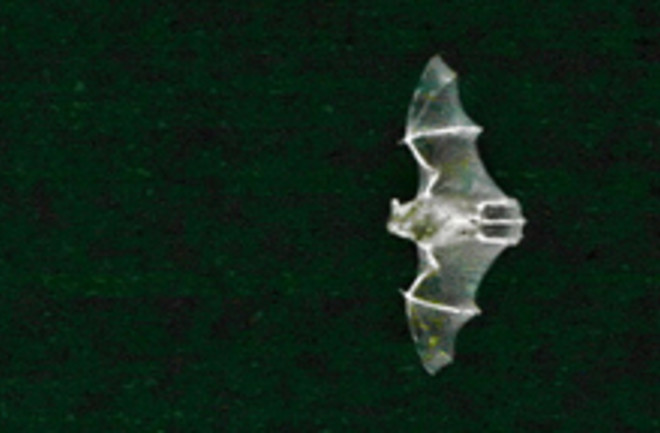 Scientists have long been impressed with bats' echolocation calls, the brief bursts of sound that bounce off surrounding objects and allow the bats to navigate in the dark. But now researchers have found a new level of sophistication in those cries. A new study of greater mouse-eared bats proves that bats can distinguish between the calls of different individual bats. Researchers say this could explain

how they remain in a group when flying at high speeds in darkness, and how they avoid interference with one another's echo-location calls [The Guardian].

In the study, published in the journal PLoS Computational Biology, lead researcher Yossi Yovel played the recordings of bat cries back to his test subjects.

"Each bat was assigned two others it had to distinguish between," Dr Yovel explained. "So we trained bat A on a platform, playing a sound from bat B on one side and from bat C on the other. He had crawl to where the 'correct' sound was coming from" [BBC News].

For a correct answer, the bat was rewarded with a mealworm. Yovel says that it's not clear how the bats tell the difference between one cry and the next.

, he says. Related Content: The Loom: How to Be a Bat [with high-speed video] 80beats: Scientists Glean Secrets of Flight From Birds, Bats, and Bugs 80beats: Space Heaters in Caves Could Protect Bats From Mysterious Disease 80beats: Bats Are Dying From White Nose Mold, But Researchers Don’t Know Why