Controversy abounds over an ancient artifact most researchers agree is astounding. 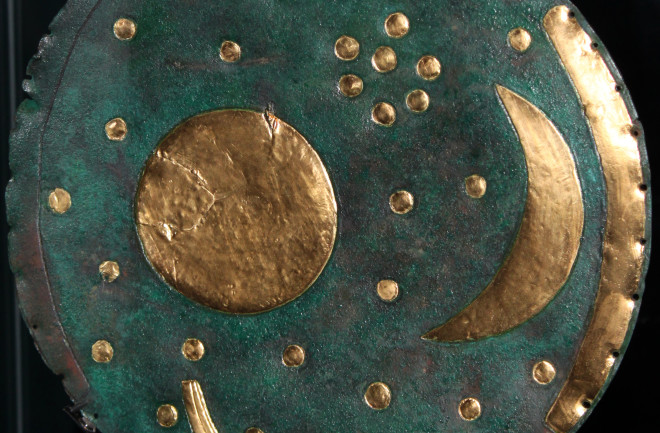 The Nebra Sky Disk is marvelous looking piece of art, no matter what its intention was. The circular copper plate is about 12 inches in diameter — about the size of a medium pizza. Only rather than pepperoni, the millennia-old disk contains inlaid circles and crescents representing stars, the moon and possibly the sun, with a series of stars dotted around them.

The disk has a number of different interpretations, with some people believing it represents the oldest sky map ever found, dating as far back as 1600 B.C.

“The Nebra Sky Disc is one of the most important archaeological finds of the past century,” write a team of researchers led by Ernst Pernicka in a paper published in the journal Archaeologia Austriaca. “It displays the world’s earliest known concrete representation of astronomical phenomena.”

But other archaeologists question the provenance of the disk, believing it may not be that old. They also question whether the disk represents a map at all. The believe it may just be a fanciful depiction of celestial phenomenon.

“It’s an absolutely unique artifact, but the secret is not solved yet,” says archeologist Rupert Gebhard, director of the Bavarian State Archaeological Collection.

The artifact was initially discovered by looters in 1999, who then sold it to a dealer together with a batch of other artifacts including bronze swords. The disk changed hands a couple of times over the next two years before the police eventually confiscated it in a raid in 2001.

The looters claimed the hoard was found on the Mittelberg Hill in the Saxony-Anhalt region near Leipzig in eastern Germany. Dating of the swords and other artifacts found in the area would place the disk at about 1600 B.C. in the Bronze Age.

Some have said that the disk represents a kind of instrument similar to a sun dial. In this interpretation, the central circle represents the sun. The arcs on either side of the disk represents the extent of the sunsets at different points of the year as seen from Mittelburg Hill, which is sometimes referred to as the “German Stonehenge.” On top of it, the sun sets behind the Brocken Mountain during summer solstice, then sets during the first of May behind the Kulpenburg, the highest hill of the Kyffhauser range. Pernicka and his colleagues believe the arcs represent a map of the moving sunset throughout the year.

Others also believe the disk represents astronomical information fixed to a specific geographic latitude. One study published in 2018 even posits that the people who made it may belong to the same culture as those that created monuments like Stonehenge. “Symmetries shown by parts of the geometric pattern may be related to an eight- or 16-month calendar – possibly used as a calendrical device,” the authors write.

Pernicka and his colleagues believe the disk is a concrete representation of astronomical phenomena. The disk displays what may be the sun or full moon, a crescent moon and stars, including a group of seven that Pernicka believes represents the Pleiades, or Seven Sisters, a small cluster of stars in the constellation Taurus.

Or Bait and Switch?

But others, like Gebhard and colleague Rudiger Krause from the Institute for Archaeological Sciences at Goethe University, don’t buy this particular interpretation, which the archaeologists pointed out in a recent publication.

The first problem is the provenance of the sky disk itself. While the looters claim it was found in the same deposit as the other Bronze Age artifacts, their stories don’t match up, Gebhard says. They claimed at one point that the sky disk was found 5 centimeters below the surface at Mittelberg. But most Bronze Age artifacts found by archaeologists at that site are buried 15 to 20 centimeters deep, meaning the sky disk would be from a much more recent era.

Gebhard notes that looters often lie about the location of artifacts since they might still hope to profit from finding other valuable treasure there. “A looter gives no information about a site of a spectacular object as long as he is not sure that he has everything found from this site,” he says. Nonetheless, Gebhard still believes the story about the artifact being buried 5 centimeters below the ground.

“We think the story is true, that it has been found immediately below the surface. But it wasn’t in Mittelberg,” he says. He believes it was found elsewhere, though he is unsure where it might have come from.

Pernicka and his colleagues maintained in their rebuttal of Gebhard’s work that the account of the discovery of the objects on Mittelberg Hill was thoroughly assessed by a court of law when the looters were on trial. “This would imply that the looters found the disc, as well as a set of unique Early Bronze Age swords and other findings, at different locations within a short period of time,” Pernicka and his co-authors write. They also believe that the relatively shallow depth of the object could be due to erosion on the hill.

Gebhard places the sky disk with others with similar motifs dating to the Iron Age. This would mean that the Nebra Sky Disk is roughly 1 millennium younger than initial dates suggested, putting it at about 500 B.C. If this is true, it wouldn’t be the oldest depiction of the night sky or the oldest star map.  “The interpretations we have right now are not satisfying because the ideas do not fit together,” he says.

Gebhard also doesn’t believe the disk represents a star map, but rather a fanciful depiction of cosmic phenomenon. Some say the bow shape at the bottom represents a boat, perhaps related to an old Germanic tale about a vessel that ferries the sun around the dark side of the Earth during the night.

But Gebhard thinks it’s supposed to be a rainbow, given the shape and the lines that divide it, as well as the shimmering hair-like lines along its edge. The images of celestial phenomena do match Iron Age artifacts, though, Gebhard holds. Celtic swords have been discovered showing rainbows, crescent moons and suns. “The center of their religion was the night,” Gebhard says.

Pernicka and his colleagues believe there is ample evidence in other Bronze Age artifacts to place the Nebra Sky Disk squarely in that era. They also believe the style of the disk’s construction isn’t quite as sophisticated as an Iron Age artifact would be.

Gebhard has no explanation for the meaning of the two arcs on either side of the disk. Even if it’s not the oldest accurate depiction of the cosmos, or a star map, he still believes the artifact is a marvelous piece. Unless the looters find themselves compelled to reveal the actual site where they discovered the object, he doesn’t think the mystery will be solved any time soon.

“I don’t think that in my lifetime a similar object will be found,” Gebhard says.